The Arabian Peninsula is bounded by the Gulf of Aqaba and the Red Sea in the west and southwest, the Arabian Sea in the south and southeast and the Persian Gulf in the northeast. The Arabian Peninsula is the largest peninsula on earth , off West Antarctica and the Middle East and is counted as part of Southwest Asia; nevertheless it is geologically part of Africa. Together with several neighboring states, it forms the Middle East .

Tectonically , this peninsula forms the Arabian Plate . Geologically, the peninsula belongs to the ancient African continental mass, even if it is separated by the rift valley of the Red Sea. The peninsula, with the Great Nefud in the north and the Rub al-Chali in the south, is almost entirely a desert area (a so-called tropic desert ); it is one of the five largest desert areas on earth.

The present-day states of Saudi Arabia are located on the Arabian Peninsula, Yemen and Oman in the south and Kuwait , Qatar and the United Arab Emirates in the east . In the north, Jordan and Iraq have a share of the peninsula. Of these countries , Saudi Arabia is by far the largest country in terms of area. Bahrain is located on an offshore archipelago.

The region borders Egypt in the west , Israel , Lebanon and Syria in the north and Iran in the east .

The population of the Arabian Peninsula was around 60 million in 2008. 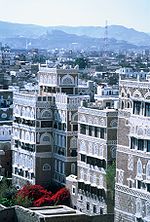 The old city of Sanaa , Yemen

An early kingdom on uninhabitable in many parts of the Arabian Peninsula was in the south of the legendary Saba , which at times all of Southwest Arabia dominated and colonies in Eritrea and Tanzania had. In the 3rd century BC The kingdom of Himyar , which was at the southwestern tip, gained dominance over ancient southern Arabia ; around 300 AD it also conquered Hadramaut , which has been important for the cultivation of frankincense and myrrh since ancient times. In the north there was first the empire of the Nabataeans , then the empire Palmyra , later also the empires of the Ghassanids and Lachmids .

Probably under the protection of the Sassanids , the Himyar king Yusuf Asʾar Yathʾar , called dhū-Nuwās , succeeded in establishing a large empire in the south of the peninsula at the beginning of the 6th century ; Nuwas adopted the Jewish faith. After the persecution of Christians by Yusuf Asar Yathar, the Aksumite Empire of Abyssinia subjugated the Himjarite Empire in 525 . When descendants of the Himjarite elite asked the Sassanids in Persia for support around 570, Yemen once again became a Sassanid protectorate. Under King Saif ibn Dhi Yazan (576–597) the Aksumites were finally expelled with Persian help, but the Sassanids took over direct rule in Yemen in 597.

The eastern parts of the Arabian Peninsula were also under Sassanid rule at the end of the 6th century. In Bahrain , King al-Mundhir ibn Sāwā from the Arab tribe of Tamīm ruled as Sassanid vassal, in Oman King Dschulandā ibn al-Mustakbir from the tribe of Azd. They were each supported by a Sassanian governor on site. While Muhammad was still alive , at the beginning of the spread of Islam , the entire Arabian Peninsula came under Islamic rule in 630.