The title of this article is ambiguous. Further meanings are listed under Bethlehem (disambiguation) .

Bethlehem (also Bethlehem, Efrata ; Hebrew בית לחם, Bet Leḥem, Arabic بيت لحم Bait Lahm , DMG Bayt Laḥm ) is a city in the West Bank with 29,930 inhabitants. The city belongs to the Palestinian Territories and borders Jerusalem in the north. It is home to two universities. TheBethlehem agglomeration also includes Beit Jala and Beit Sahur ; The latter place, like Bethlehem, has biblical significance for the Israelites because, according to tradition, it is said to be the birthplace of King David . Thecity ​​is of particular importance to Christians around the world because, according to tradition, it is the birthplace of Jesus . Mayor of the city of Bethlehem is the Arab Christian Anton Salman.

The meaning of the name בֵּית לֶחֶם bêt læḥæm , German 'Bethlehem' has not yet been clarified. Whileבֵּית bêt can be clearly translated as "house", the second part of the name is unclear.לֶחֶם læḥæm stands for “bread” in Hebrew ,لحمin Arabic on the other hand for “meat”, in some South Arabic dialects also for “fish”. The root thus originally referred to the staple food. It is to translate either "house of bread" or "house of flesh".

However, it is also possible to derive the second word component from the homonymous root lḥm with the semantic field “fight”; Bethlehem would then mean "house of struggle". Further interpretations include the pair of gods Lahmu / Lahamu in their considerations, according to which Bethlehem would be the “house of the deity Lahmu / Lahamu”. 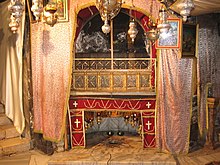 Altar above the star of Bethlehem in the nativity grotto

Star of Bethlehem in the nativity grotto 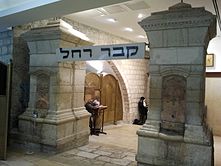 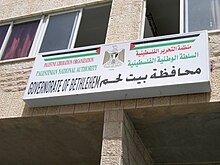 Headquarters of the Bethlehem Governorate

The place is first mentioned in the Bible in Gen 35.19  EU . There it says that Jacob's beloved wife Rachel was buried “on the road to Efrata, which is now called Bethlehem” (cf. also Gen 48: 7). After the conquest of Canaan by the Israelite tribes, the town fell to the tribe of Judah (Jos 15:59; 1Chr 4:22). Most of the events from the book of Ruth also take place in Bethlehem, and both Ruth's first father-in-law Elimelech and her later husband Boaz (Ruth 2,4) came from this place ( Ruth 1,1  EU ). Ruth moves with her first mother-in-law Naomi to Bethlehem (Ruth 1:19:22), where she starts a family with Boaz (Ruth 4:11).

Bethlehem was David's place of origin according to 1 Sam 16.1  EU , where the expected Messiah was also to be born as a descendant (“son”) of David ( Mi 5.1  EU ). In this verse it is referred to as "Bethlehem-Efrata" to distinguish it from another place called Bethlehem , which was in the tribal area of Zebulun , about 11 km west-northwest of Nazareth (Jos 19:15).

Further evidence in the Tanach is the following:

According to Matthew 2.1  EU and Luke 2.4–11  EU , implicitly also John 7.42  EU , Jesus Christ was born in Bethlehem. The assumed place of birth in a cave has been venerated since the 2nd century. Since the year 333 that stands on the site of the Nativity . On June 29, 2012, the Church of the Nativity was added to the UNESCO World Heritage List . It is disputed whether Bethlehem is actually the birthplace of Jesus.

The oldest extra-biblical reference to the existence of the place is a 3000 year old seal from the Kingdom of Judah .

Rachel is in Judaism as a symbol for Israel and his grief for the lost people of Ephraim , that not of Assyrian captivity returned: "Rachel weeping for her children refused to be comforted" ( Jer 31,15  EU ).

The Catholic University of Bethlehem, founded by the Vatican , has existed since 1973 . 3,014 students are enrolled; one third of them Christian and two thirds Muslim (as of 2010). Philosophy, economics and science, education, nursing and tourism are taught. In addition, a course of eight semesters with theological, religious and sociological subjects is offered, which leads to a Bachelor of Arts.

In September 2007 the Palestinian administration announced the establishment of a second university in Bethlehem. The start of studies at Ahliya University took place with immediate effect.

As early as 1882 opened French Vincentians a hospital , consisting of the 1990 Holy Family Hospital (Holy family hospital), a maternity hospital of the Order of Malta emerged.

The Children's Relief Bethlehem runs the Caritas Baby Hospital, the only Palestinian children's hospital in the West Bank, which involves the mothers in the treatment of children since 1,952th 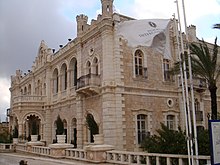 Tourism has always been an important source of income for the city. Due to the proximity to Jerusalem, many tour groups used to prefer to stay in cheaper Palestinian hotels than in the capital. After the autonomy, therefore, large new hotel buildings were built by returning emigrants. B. Hotel Bethlehem, Hotel Nativity. The crib square became car-free after the construction of a parking garage . The many souvenir shops also made a living from day trippers. The anniversary year 2000 was prepared and opened with great enthusiasm, but the outbreak of the Second Intifada destroyed all efforts. The repeated occupation of the city (once with the siege of the Church of the Nativity and the Church of St. Catherine ) caused great damage. The great wall hindered tourism massively, and the cumbersome crossing of the border control point meant that the tour groups rarely stayed overnight in the city. The big hotels had to close again or reduce their capacity, day guests had to change buses and travel guides on the border with Jerusalem. The large workshops for olive wood carving had to lay off many employees. They could still market their products in Jerusalem, but with less profit.

In 2010 the tourist situation improved significantly: About half of the tourists stayed in Bethlehem and visited the restaurants there; many souvenir shops offer their goods. The Palestinian Authority expects a record attendance of up to two million by the turn of the year. Furthermore, since the year 2000, tourist tours by Israeli tour guides have been taking place again.

In 2008, Bethlehem hosted the largest economic conference ever held in the Palestinian Territories, the Palestine Investment Conference . The initiative came from the Palestinian Prime Minister Salam Fayyad . Over 1000 business people, bankers and government officials mostly from the Middle East attended. The conference continued in 2010 under the patronage of President Mahmoud Abbas with almost 2000 participants from 32 countries. 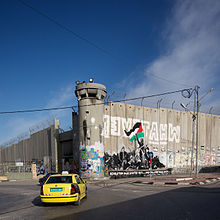 The wall of Bethlehem 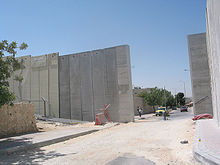 Passing point of the Wall of Bethlehem

North of the city runs the Israeli barrier , which separates Bethlehem from Jerusalem and smaller Palestinian villages such as Walaja and Jaba with a wall up to eight meters high. The freedom of movement of the Palestinian residents of the city of Bethlehem is restricted as a result.

Aida (Arabic: مخيم عايده), also called 'Ayda, is a Palestinian refugee camp around 2 kilometers north of the historic center. The camp was created in 1950 by refugees from the Jerusalem and Hebron area. 1125 people lived in 94 tents. Around 5498 people currently live in the camp (as of 2014).

Fifty years ago there were only a few mosques in the Bethlehem agglomeration . Today there are about 100. On the day of arrival Arafat on 23 December 1994 was on the roof of the Church of the Nativity in Bethlehem, a 4 × 4-meter model of the Muslim Dome of the Rock situated. The Christians responded by placing large illuminated crosses on their private homes. In January 1994, a few days after Bethlehem was handed over to the Palestinian Authority (PA), 49,654 Christians were living in the Palestinian-controlled areas of the West Bank and Gaza. Since then, 10,754 Christians are said to have left these areas, around half of them since the outbreak of the El-Aqsa Intifada in September 2000. In Bethlehem alone, the largest concentration of Christians, the number fell from 29,401 to 23,659. The reasons for this are controversial. While the Israeli government and pro-Israeli groups blame the tensions between Christians and Muslims due to the strengthening of Islamist currents and the social inequalities between more affluent Christians and poorer Muslims, a 2006 survey of Christian residents in the city, carried out on Palestinian Center for Research and Cultural Dialogue found that 78% of Christians blame the Israeli travel restrictions for the exodus of their co-religionists. 90% said they have Muslim friends and 73% of Bethlehem's Christians believe the PA treats the city's Christian heritage with respect.

The PA determined that the mayor and his deputy must be Christians. Even the confession of the mayor is fixed: Greek Orthodox or Roman Catholic . In view of the population development, there is resistance from Muslims to this statute. On the other hand, this fact allows the twin cities to maintain political contacts with the Hamas-dominated community.

Bethlehem has partnerships with the following cities:

There are also partnerships with the regions of Umbria in Italy and KwaZulu-Natal in South Africa.

The ecumenical campaign “ Light of Peace from Bethlehem ”, which began in Austria in 1986, is linked to peace campaigns by young people . In Germany , the main sponsors are the boy scout associations .