This article explains the biblical book of Ruth; the monumental film from 1960 is explained under The Book of Ruth .

ֹּ The book of Ruth or Ruth , Hebrew רוּת, is a book of the Tanakh and the Christian Old Testament . It has been divided into four chapters since the Middle Ages . The book of Ruth, as a novella in the Hebrew Bible, comprises a total of 85 verses. Here the book is under the "five fixed roles" (Ruth, Song of Songs, Kohelet, Lamentations, Esther). In the Greek-Latin. Tradition has it that it is regarded as an appendix to the Book of Judges and accordingly placed before Samuel's books. The “foreign peoples motif” (Ruth, the Moabite woman ), however, suggests to many interpreters that it was written in the post-exilic period (not before the second half of the 6th century BC). In Judaism, the book of Ruth is one of the five megillot , the festival rolls, and is read in the festive liturgy of the Jewish festival of the week . The book is about 1000 BC. At the time of the judges in Israel. Obed , Rut's son, is David's grandfather . 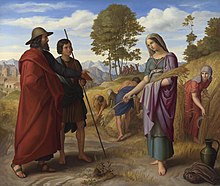 Ruth in the field of Boaz, painting by Julius Schnorr von Carolsfeld , 1828

The book of Ruth tells of the fate of a Jewish family who had to emigrate from Bethlehem in Judah to neighboring Moab because of a famine . Naomi (one of the main characters in the novel) and Elimelech move abroad with their two sons Machlon and Kiljon , where Elimelech dies soon after. The sons marry two Moabite women, Rut and Orpa ( Rut 1.4  EU ), but remain childless. After her sons died, Naomi was left alone as a widowed wife with her now widowed daughters-in-law ( Ruth 1.5  EU ).

Orpah then stays in Moab, but Ruth insists on moving to Israel with her mother-in-law, although as a Moabite she has to expect rejection there. Ruth replied, “Don't urge me to leave you and turn back. Wherever you go, I will go, and wherever you stay, I will stay. Your people are my people and your God is my God. Where you die, I will die too, that is where I want to be buried. The Lord should do this and that to me - only death will part me from you. ”( Ruth 1: 16-17  EU )

In Israel, Ruth collects ears of barley from Boaz , a relative of Naomi, which according to ( Lev 19.9  EU ) and ( Lev 23.22  EU ) the poor and strangers were entitled to. Boaz notices Ruth, acknowledges her extraordinary commitment to her family (2.11ff.) And encourages her. Then Naomi advised Ruth to lie down with Boaz at night after working in the fields. Boaz promises Ruth to marry her. There is, however, another relative who also has the right and duty to marry Ruth under the Levirate Law. Since the latter refuses, Boaz releases Ruth and takes her as his wife. Ruth bears him a son, Obed , the father of Jesse and grandfather of David . Ruth is thus also related to Jesus (see family tree of Jesus in Matthew 1.5 EU and Luke 3.32 EU )

The Orthodox Rabbi Israel Drazin sees the story of Rut as an example of how it was easier for non-Jews to be recognized as members of the people of Israel than it is now . According to the Mishnah , the recognition of Ruth as an Israelite does not contradict Deuteronomy 23: 4, since this regulation only applies to the male Moabites.