The Lamentations of Jeremiah , Hebrew אֵיכָה Echa , in the Septuagint θρῆνοι Thrē̂noi , in the Vulgate Lamentationes , also known in Latin as Thrēnī , sometimes also referred to as Jeremiads (abbreviated Klgl or Thr ), are a book of the Tanach that consists of five poems. There they are classified within the Ketuvim (writings), the third part of the Tanach according to Torah (instruction) and Nevi'im (prophets), under the fixed roles ( Megillot ), in the Old Testament of the Bible they are brought forward in the order, already after the prophet Jeremiah .

In the Lamentations, the destruction of Jerusalem and the temple of 586 BC is described. Mourned. The facts of the event are described in 2 Kings 25  EU and Jer 52  EU . From this point of view, an origin between 586 and 530 suggests itself. The deep shock in the first four chapters suggests that they were written out of direct experience shortly after the fall of Jerusalem. Chapter 5 emphasizes more the suffering of exile.

The lamentations are anonymous, they contain nothing that suggests the author. According to Jewish tradition from pre-Christian times ( Targum , Septuagint), the prophet Jeremiah is considered to be the author. Opinions differ in the secondary literature. In the mainstream of today's theological world, Jeremiah is hardly represented as the author. However, there are similarities in style and language between the prophetic book of Jeremiah and the Lamentations. It can be assumed that the author was an eyewitness to the destruction of Jerusalem in 586 BC. Was a contemporary of Jeremiah. Some authors assume that after the exile, Jeremiah stayed in Judah for a time to look after those who were left behind. The lamentations were written during this time.

The Lamentations are examples of high-quality Hebrew poetry. They are written in the meter of the Jewish lament for the dead ( Qina ), the first four as Abecedarius (alphabetical song). This acrostic not only has the practical purpose of a memory aid, but is also an expression of the limitlessness of all-inclusive grief - compare in German the expression “from A to Z” for “everything”. The acrostic shows that the songs were written literature from the start and not an oral tradition written down later.

The first two songs each contain 22 verses with three lines. The first words of each verse begin in sequence with the 22 letters of the Hebrew alphabet. The fourth song is designed in the same way, but there are two lines for each verse. The third song has 66 verses, divided into 22 units of three verses each. Each of these verses begins with the corresponding same letter. A peculiarity is that in the second to fourth song the Pe -vers is, contrary to the current alphabetical order, before the Ajin -vers. However, this sequence is also documented in old alphabet tables. The fifth song has 22 single-line verses, but no specific sequence of letters. The Lamentations use a large number of images to depict the suffering and grief in a vivid way.

The most striking feature is the personification of Jerusalem as the "daughter of Zion ", complaining mother, raped and dishonored lover and abandoned widow. These elements indicate that a genre of ancient oriental city complaints may have served as the model for these texts.
The following elements of complaint can be found:

The Lamentations in Judaism and Christianity

Jeremiah laments the destruction of Jerusalem , image field on the great Knesset menorah 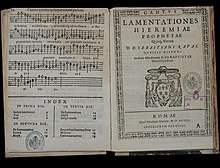 In the liturgy of the Roman Catholic Church, the Lamentations in the Triduum Sacrum of Holy Week are sung as readings in the early morning carmets . In his introduction to the Lamentations, Allioli indicates various motives and intentions of the Church for this choice. In the reading chamber of Paul VI. Reformed and adapted for the German-speaking Catholic Church, the Lamentations have found their place as the first reading in the first series of Holy Week; the fifth lamentation, the Oratio Jeremiah, is also sung there as the third canticle of the reading chamber expanded to the vigil on the nights of the six Sundays of Lent, Good Friday and Holy Saturday.

In the pre-conciliar karliturgy, the chanting of the lamentations is introduced with Incipit Lamentatio Ieremiae prophetae (if the pericope matches the beginning of the text) or De Lamentatione Ieremiae prophetae (if the pericope begins in the middle of the text) or in Klgl 5 with Oratio Ieremiae and in each case with the Latin call Jerusalem, Jerusalem, convertere ad Dominum Deum tuum ("Jerusalem, Jerusalem, convert to your Lord and God") completed.

In the history of church music there are a large number of settings, either only the lamentations or the responsories . The latter include works by Carlo Gesualdo and Marc-Antoine Charpentier . The text of the lamentations is distributed differently on the respective days or nocturnes :