This article describes the biblical prophet and his book. For further meanings see Hosea (disambiguation) .

Hosea (also: Hoschea , Hebrew הושע, in the Septuagint Ωσηε , in the Vulgate Osee ; " YHWH saves") refers to a historical scriptural prophet (750-725 BC) in the northern kingdom of Israel and the book ascribed to him. The book of the Twelve Prophets begins with him in the Hebrew Tanakh . It tells of Hosea's struggle against idolatry in metaphors of a love affair.

In its current form, the book is divided into three parts, around which the opening and closing words 1.1 EU and 14.10 EU stand as a framework. The division into 14 chapters was only made in the Middle Ages .

The first three chapters contain three concentric sections (structure: A – B – A '), which depict Hosea's marriage to a whore or adulteress as a mirror of Israel's infidelity to YHWH .

“After that the sons of Israel will repent and seek the Lord their God and their king David. Trembling they will come to the Lord and seek his kindness at the end of days. "

This eschatological outlook points to a composition of this main part towards the end of the exile, when hopes arose among the exiles for a descendant of David who would reunite Israel and Judah and thus usher in the messianic dispensation. Hosea's acute present-day announcement of doom, which left no more excuse, was historicized as a call of penance, to which past events were interpreted in order to gain new perspectives for the future. Hosea knows nothing else about King David, a Messiah and the Jerusalem temple cult.

The two contradicting marriage reports have given exegesis many riddles: Which of the two reports is authentic? Was it the same or a new marriage? Was this only to be understood metaphorically or was it real? Nothing is reported about a divorce from Gomer. Walther Zimmerli assumed that she was a temple prostitute, as Hosea sharply criticized this practice and was persecuted for his court sermon ( Hos 9,7b-8  EU ). His loyalty to the adulteress, however, already expressed YHWH's loyalty to Israel precisely in his inevitable judicial act.

From the fourth chapter onwards, God's and prophetic speeches are lined up and sometimes address the whole people of Israel, then again their priests and the king or describe their guilt in the third person.

A big accusation speech like in a court case outlines the subject of the whole book in Hos 4,1-3  EU , introduced with: "Hear the word of the Lord, you sons of Israel!" (4,1a EU ) It enumerates the offenses of the people : “For the Lord brings a complaint against the inhabitants of the land: There is no loyalty and no love and no knowledge of God in the land. No, curse and deceit, murder, theft and adultery are spreading, bloody deed is lined up with bloody deed. "(4.1b-2 EU ) The standard here are the Ten Commandments , whereby the breach of the 1st commandment to love God alone all further legal violations result. This has fatal consequences for everyone: "Therefore the land should wither, everyone who lives in it should wither, [...]" (4,3 EU )

This presentation of the “horizon of interpretation” ( Jörg Jeremias ) as YHWH's trial against his people is followed by two well-composed paragraphs, each with five sections (structure: 1 + 2/3 + 4/5 ).

Now the two main sins of Israel are presented.

Chapters 12-14 are a kind of summary of the Hosean court proclamation with a concluding character and an invitation to repent after the fall of Samaria. It may have been an appendix to chapters 4–11 at an earlier stage of editing, a kind of final discussion by Hosea's followers.

Hos 14,2-14,10 is interpreted as an exilic prophecy of salvation and as an appendix.

The text stock of the book Hosea belongs to the biblical books with the longest history of transmission along with the book of Amos . Correspondingly, historical-critical biblical research is divided on its possible origin and tradition. Four conceivable development models are discussed:

However, this editorial office may already have had a long-standing collection of Hosea's prophecy, which probably began in the southern kingdom soon after 722. It is possible that salvation announcements were already placed there unconnected next to the older, authentic words of Hosea's doom, since after 586 Judean prophecy was supplemented and interpreted in this way ( Hans Walter Wolff , Otto Kaiser ). 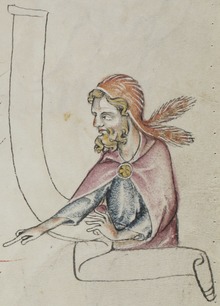 Hos 1,1  EU introduces Hosea as the son of Beeris . You don't find out more about your origins. However, it probably came from the northern kingdom, because it referred exclusively to its traditions and appeared mainly in the capital Samaria , possibly also other Israeli places of worship such as Bethel and Gilgal , which are mentioned.

He is said to have worked in the reign of the Judean kings from Uzziah (approx. 787–736) to Hezekiah (approx. 728–700) and under the Israeli king Jeroboam II (787–747). At first he succeeded in recapturing the territories lost to the Arameans ( 2 Kings 14.25  EU ). But soon afterwards Israel and Judah were increasingly threatened by the new great power Assyria ; In 722 their king Shalmaneser V conquered Samaria and ended the kingship of the northern kingdom.

A few allusions allow Hosea's period of activity to be narrowed down:

In contrast to the prophet Amos ( Am 7,14  EU ), who appeared around the same time, no explicit calling is reported from Hosea . His prophecy is predominantly cult criticism, reveals precise knowledge of the practice of sacrifice and puts the Exodus tradition in the foreground. It has therefore been assumed that Hosea was connected with opposition priests in the northern kingdom who fought syncretism and - similar to the previous prophets Elijah and Elisha  - tried to enforce the exclusive veneration of YHWH against a compensatory religious policy of the kings that included the Canaanite cult of Baal. In the Deuteronomistic History, this policy is stereotyped as the "sin of Jeroboam" responsible for the downfall of the northern empire.

Hosea's own love story was a tale of suffering. He married a woman who was repeatedly unfaithful to him. He summoned her, even locked her up to prevent further meetings with her lovers. He called her a whore or tried pedagogical punitive measures.

“I have no mercy on their children either; because they are prostitutes. Yes, her mother was a prostitute, the woman who bore her did shameful things. She said: I want to follow my lovers; they give me bread and water, wool and linen, oil and drink. That's why I block her way with thorn bushes and block it with a wall so that she can no longer find her path. Then she runs after her lovers, but does not catch up with them. She looks for them but doesn't find them. Then she will say: I will turn back and go back to my first husband; because I felt better then than now. "

This catastrophic marriage, in which the betrayed cannot leave his beloved despite her infidelity, was taken as a symbol for Israel, whose people worshiped several gods like a whore. Hosea's patience, which neither gives up his wife nor the hope of her return, testifies to a great, touching passion.

“How can I give you up, Ephraim, how can I give you up, Israel? How could I reveal you like Adma, treat you like Zebojim? My heart turns against me, my pity flares up. I do not want to exercise my fiery anger or destroy Ephraim again. Because I am God, not a person, the holy one in your midst. That's why I don't come in the heat of anger. "

As a prophet of the northern kingdom, Hosea referred exclusively to its traditions, especially the exodus from Egypt , the desert wandering and the 1st commandment ( Hos 13.4  EU ). His court sermon was as radical as that of his contemporary Amos. Hosea also called for social justice and social change ( Hos 10,12f  EU ), but placed criticism of the sacrificial cult and the priests in the foreground. In doing so, he took up the older written prophecy of Elijah, who also rejected any synthesis of Baal and YHWH as a fatal apostasy for Israel ( 1 Kings 18  EU ).

Hosea referred this criticism not only to the Baal cult (2.11 EU ; 9.10 EU ; 11.2 EU ), which continued alongside the worship of YHWH , but also to the traditional animal sacrifices for YHWH himself, which Israel's God and Baal guarantee the Abused welfare:

Even in the places and under the pretext of worshiping YHWH, “ idolatry ” was hidden for him . The as in Ex 32 blasphemy condemned bull calf of gold was probably not a foreign idol, but an acquired from Canaan symbol for the expected YHWH fertility of the land ( Hos 8.5  EU ; 10.5 EU ), were sacrificed to the bulls ( Hos 12, 12  EU ). In the name of the god so worshiped, Hosea rejected the sacrificial cult altogether:

"I want love, not sacrifice, knowledge of God instead of burnt offering."

Hosea's political criticism was in no way inferior to this. He applied it not only to the violent coups and the vacillating foreign policy of the kings of Israel, but to kingship in general:

"All their malice was revealed in Gilgal, there I learned to hate them."

In Gilgal Saul was elected the first king of Israel at that time ( 1 Sam 11  EU ). Instead of cheering a new king as the bringer of salvation as expected by priests and prophets, Hosea saw succession and confusion of the throne as a sign of divine judgment:

"In my anger I gave you a king, in my resentment I took him away."

Like later Jeremiah ( Jer 31.20  EU ) and Tritojesaja ( Isa 63.15  EU ), Hosea also emphasized God's passion for his unfaithful people and his compassion for their fate up to the "pain":

"My heart is of a different mind [which can also be translated as: turns around in me , pains me ], all my mercy is kindled."

Hosea saw precisely this ability to repent and to show renewed mercy towards the fickleness and unfaithfulness of the human ally as the unmistakable identity of this God ( Hos 11,9  EU ): "[...] Because I am God, not a person [...]" .

Theologians like Jürgen Moltmann and Wilfried Härle see in this prophetic theology of God's compassionate pain a necessary correction of a one-sided image of God, which defines God's being only as love without inner movement, without change and drama. Judgment, anger, repudiation and renewed acceptance of loved ones are inseparable and inescapable parts of this love and make up its reality content in the historical experience of Israel.

In synagogal practice, the Haftara from the 14th chapter of the book of Hoschea (verse 2) is recited on the Shabbat between Rosh Hashanah and Yom Kippur . The reading begins with the Hebrew words Shuwa Yisrael : "Repent, Yisrael, to the Eternal, your God." Because of this prophetic reading, this Shabbat was given its special name Shabbat Shuwa = "Shabbat of conversion" and thus fits into the ten days of repentance between Rosh Hashanah and Yom Kippur.