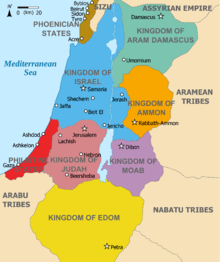 Kingdoms in the Levant 830 BC Chr .; turquoise: Aramaic Kingdom of Aram of Damascus

The Aramaeans ( Aramaic ܐܪܡܝܐ) are a Semitic ethnic group who founded several kingdoms such as Aram (Damascus) , Arpad ( Aleppo ) and Hamath ( Hama ) in the Levant and northern Mesopotamia since the end of the Bronze Age , most of which later came under the rule of the New Assyrian Empire. Due to resettlements and the general population shifts in the Neo-Assyrian period, the Aramaic language became the official language of the Neo-Assyrian , Neo-Babylonian and Achaemenid empires and more and more the language of communication and diplomacy in the Middle East , among the Seleucids , Parthians and Romans . Since the Parthian period (in the 3rd century BC), the individual Aramaic tribes can no longer be distinguished.

The name "Aram" is first found in an inscription by the Akkadian king Naram-Sin from the 23rd century BC. BC, where it is used as a place name. Since mittelassyrischer time the term "Syrians" serves as a collective term for various nomadic tribes, probably v since the 13th century. Invaded north Mesopotamia from the west. In the course of the centuries-long conflicts with the ancient oriental states and a partly faster, partly slower settling down, the language and customs of the various Aramaic tribes may have been harmonized over time ( ethnogenesis ).

The name mat a-ri-me has been used since Tiglath-Pileser I. In the annals of Aššur-bel-kalas (part III, line 27) there is the designation a-ri-mi.

Achlamu , semi-nomads, are mentioned in Assyrian sources since Rim-Anum (18th century BC) and in texts from Mari . Since the rule of Arik-den-ilus (1307–1296 BC) the Achlamu often fought on the side of Mittani or the Hittites against the Assyrians. After the fall of Hanigalbat , Assyria failed to control the nomads. Most of the Assyrian fortifications, like Dur-Katlimmu , were to the east of the Chabur . The density of settlements on the Jezireh and in the Tur Abdin decreased significantly due to the unsafe conditions, the destroyed Mitann cities were not rebuilt. It is likely that parts of the previously sedentary population switched to nomadism in these uncertain times.

Perhaps the Hirana , who appear in letters from Dur-Kurigalzu , belong to these ethnic groups. These Hirana had settled in Subartu and also lived in Mari and Suhu on the central Euphrates. Some researchers also see early Aramaeans in the 'Army of the Ugarit' texts.

Very soon the Achlamu grew into a threat to Assyria that was soon greater than that of the Lullubians in the east. Aššur-reš-iši I (1133–1116 BC) boasted of having defeated the Achlamu, “killed their far-flung hordes and crushed their troops”, but his son Tiglat-pileser I (1115–1077 BC) . Chr.) Had to lead a total of 14 campaigns against them. The nomads fled from his army across the Euphrates . The king succeeded in taking six of their cities, but there was no lasting success, the nomads dispersed instead of standing for battle. These campaigns took place in the area between the city of Tadmor ( Palmyra ) and the mountain Jabal Bishri (Hana), which perhaps even got the name "Mountains of the Achlamu".

From the fourth year of Tiglath-pileser's reign I, i.e. 1111 BC BC, the Achlamu are mentioned in connection with the Aramayya: “28 times I fought the Achlamu peoples and the Aramayya. I brought their possessions as spoils of war to my city of Aššur. ”Tiglat-Pileser I had the Euphrates crossings fortified in the hope of being able to keep the nomads west of the river - without success. Under Aššur-bel-kala , the term Aramayya can only be found alone.

Under Aššur-rabi (1010–979 BC) Mutkinu on the Euphrates and Pitru on the Sagur fell to the nomads. These fortresses were only under Shalmaneser III. (858–824 BC) conquered again.

The Achlamu were not only robbers, but were also used as drovers and caravan drivers. They lived in tents, under the jurisdiction of a sheikh, rab zārāti , lord of the tent camp. In Kassite Nippur they served by disclosure of rations lists as security guards. Some also had Kassite or Babylonian names.

In Egyptian texts they are called P3-j-r'-mw and have been since Amenhotep III. (1391–1353 BC) documented. At the time of Amenophis IV (1349-1332 BC) the Achlamu intercepted a messenger from the Pharaoh sent to Aššur-uballiṭ I of Assyria. A letter from Ḫattušili III. (1275–1250 BC) to Kadašman-Enlil II. Of Babylon (1258–1250 BC) mentions Achlamu, predatory nomads who carried out safe trade on the central Euphrates as far as the area of Tuttul (Tell Bi'a ) threaten. Ḫattušili calls on Kadašman-Enlil to take military action.

After the collapse of the Hittite Empire around 1200 BC At a time when Egypt was weak , the Arameans were able to found numerous small kingdoms in northern Syria, Bit Agusi (Arpad, Aleppo), Bit Adini and Ja'udi . The small late Hittite states such as Karkemiš , Hamath, Aleppo and Unqi could not resist them in the long run. Hamath fell at the end of the 11th century BC. To the Arameans, the Orontes and Litani valleys and large parts of southern Syria were occupied.

In the 11th century BC According to biblical tradition, the Israelite kings Saul , David and Solomon fought the Arameans in Lebanon . The Bible names the tribes of Aram ( Damascus ), Aram-Zoba ( Beka'a ), Geschur in Hauran , Aram-Ma'ka am ( Hermon ) and Aram-Bet-Rehob .

In the 12th century BC There were numerous Aramaic settlements in the Euphrates arch south of Karkemiš . The kingdom of Bit Adini with the capital Til Barsip (Tell Achmar) already stretched on both sides of the river. Other principalities of this time were Bit-Bahiani with the capital Gosan on the upper Habur , Laqê on the Habur estuary, Suhi on the Euphrates and Gidara (aram. Radammate ) on the Tigris . Aramaic tribes also settled on the lower Tigris around the Diyala estuary.

With Adad-apla-iddina an Aramean ascended the throne of Babylon . During his reign, plundering Suti and Arameans devastated the Ebabbar des Šamaš in Sippar - the cult image of the god was lost - and temples in Nippur and attacked Dêr and Dūr-Kurigalzu . These processes are known from a consecration inscription on the throne of Enlil from the Eurrigal in Nippur (only survived in two copies) and the eclectic chronicle .

With Adad-nirari II. (911-891 BC) the Assyrian period of weakness was overcome (beginning of the New Assyrian Empire), and he began with campaigns against the Aramaeans and Hanilgabat (Mitanni). He subjugated Suhi , Hit, Nasibina Nisibis , Huzirina and Gidara . Assurnasirpal was able to break the Aramaic supremacy on the Chabur and reached the Mediterranean under Shalmaneser III. who also cleaned his weapons in the "Upper Sea", the Assyrian rule over the Aramaic tribes was consolidated on the Euphrates (Bit Adini), Chabur and in northern Syria (Bit Agusi). The Arameans on the Euphrates were more and more integrated into the Assyrian Empire .

However, the kingdom of Aram put up stiff resistance and was able to prevent Assyrian rule from spreading further south. At the Battle of Qarqar in 852 BC BC Shalmaneser allegedly defeated a coalition of twelve tribes under the leadership of Irhuleni of Hama and IM-idri of Damascus , but could not extend this victory. From 849 to 835 BC There were further campaigns to Aram-Damascus, as revolts broke out again and again.

Šamši-Adad V had concentrated his military activities mainly on Babylon, Šammuramat took care of the situation in Syria again. 805 BC Adad-nirari II was able to receive the tribute from Aram. He also led campaigns against the nomadic tribe of the ʾItū in the Zab Valley. According to Babylonian reports, plundering nomadic Arameans caused great damage in the south, in the area of ​​Babylon and Borsippa . Only Tiglat-pileser III. was able to subdue the nomadic tribes in the south, he reached the Persian Gulf with his army . In Syria he was able to defeat Arpad , which had fallen under Aššur-nirari V. and entered into an alliance with Meliddu , Kummuhu and Gurgum , after a two-year siege in 740 BC. Occupy although Sarduri II tried to come to their aid. 739 BC Tiglat-Pileser III followed. Panamuwa II's cry for help from Ja'udi and killed the usurper Azarja. He then set up Panamuwa II as king. Aram did not fall until 732 BC. Under Tiglat-pileser III., The population was deported. Under Tiglath-pileser III. If there were other large deportations , 30,000 people from the Kingdom of Hama were forcibly relocated to Urartu and Mannai , and 150,000 Arameans from southern Babylonia had to settle in the eastern highlands. These measures were intended to break the resistance of the subject population and to compensate for the population losses caused by the constant wars. At the same time, these measures led to an increasing Aramaicization of the Assyrian Empire.

The subjugated Aramaic tribes were increasingly incorporated into the Assyrian Empire. The mother of Assurbanipal (669–627 BC) Naqi'a / Zakûtu was an Aramaic woman. She enjoyed great influence at court and was ultimately the one who secured Assurbanipal's accession to the throne after the death of Asarhaddon . With the increasing spread of Aramaic as a lingua franca in the entire Middle East, the trace of individual Aramaic tribes is lost.

In post-Christian times, an independent principality Edessa was able to assert itself . Syrian culture and language flourished again for a short time under the Abgar princes. After the peace between the Persians and the Emperor Jovian in 363, a fort near Nisibis on the road to Amida , of which mighty blocks still bear witness, became the border between the Christian Roman Empire and the Zoroastrian Persian Empire. This border separated Syrian-speaking Christianity into two wings: the imperial church belonged to the Patriarchate of Antioch , the eastern one formed the East Syrian Catholic Seleukia-Ctesiphon .

The Arameans are a modern ethnic minority. An Aramaic flag was created in 1980.

The Israeli Interior Minister Gideon Sa'ar signed an order on September 16, 2014, according to which the Arameans can be entered in the Israeli population register as a separate national population group. The decision will above all give Christian families who themselves feel they belong to this ancient nationality the opportunity to register as Arameans. So far they have been listed as Arabs. In making his decision, the Minister of the Interior relied on three expert reports who had come to the conclusion that these nationalities met the conditions for official recognition, including the shared historical heritage, religion, culture, origin and language.

The Aramaic language has been or is used in the Christian liturgy of various churches: