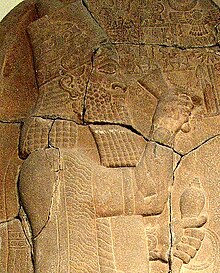 Stele with Asarhaddon in the Pergamon Museum

The sources of the history of Azarhaddon's government are the royal inscriptions, the lists of eponyms , parts of the Assyrian state archive that have been preserved in Nineveh , chronicles, state treaties, the so-called " letters of God ", oracle texts (especially towards the end of his reign) and administrative documents.

Seven letters from Crown Prince Assurbanipal to his father have survived, as well as four from his brother Šamaš-šuma-ukin and three from his brother Šamaš-metu-uballit and one from Princess Šerua-eterat, who did not get along particularly well with her future stepmother Libbali-šarrat seems to have understood well.

The Nimrud prism reports on the conditions on Iadnata (Cyprus) and names the names of ten kings who are tributary to the Assyrians.

Steles and inscriptions of Azarhaddon are known from:

Asarhaddon was the youngest son of Sennacherib . His mother was the Aramaic queen Naqia . Its scribe was Issar-duri. The half-brother Arda-Mulissu was a rebel leader and fled after his defeat in 680 BC. First to Urartu , then to Subria . His younger half-brother Aššur-nadin-šumi was from Sennacherib 700 BC. Was installed as king of Babylonia , but was handed over to the Elamites by his subjects at the instigation of some astrologers . His sister Saddītu lived in the palace.

His wife and mother of Assurbanipal and Šamaš-šuma-ukin , who probably bore the name Ešar-ḫamat , died in February 672 BC. It was titled Mi.É.GAL. Other known children are:

In addition to the queen, the king apparently also had a harem of female slaves. It is reported that after the conquest of Memphis, virgins from Cush were housed in the royal palace. However, equating the queen's palace with the harem seems inappropriate. When the eldest son of Azarhaddon died, Ashurbanipal was ruled from 672 to 669 BC. Chr. Crown Prince. He was married to Libali-šarrat and succeeded his father on the throne.

As crown prince, Asarhaddon took part in battles in Bit Hamban against the Kimmerers . King Sennacherib was born in 681 BC. Murdered BC; whether Azarhaddon was behind the act is unclear; in fact, he had to enforce his claim against Arda-Mulissu and his brothers in a six-week civil war by force.

The succession in the rule was regulated among other things through contracts with the vassals . So Asarhaddon concluded a treaty with the kings of the Medes that they should recognize his son Ashurbanipal "the crown prince of the successor house" as king in his place, and Šamaš-šuma-ukin as king of Babylon . They should:

The contract is reinforced with curses from contract breakers. Who should violate it (among other things):

The oath is affirmed with the sacrifice of a ewe, and the fate of the sheep is magically (and in great detail) equated with that of the oathbreaker.

Usually the Assyrian kings went out on campaigns every year. Years in which the king “stayed in the country” are usually regarded as a sign of internal unrest. However, the rab-sarri or other high officials, such as the head eunuch, could lead campaigns.

The king used to lead the battle from a hill while his nobles ( rabiu ) led the troops into battle. From a letter to Azarhaddon (83-1-18,861) it emerges, however, that Azarhaddon led some of his troops personally. The (unknown) author of the letter advises against such a procedure. Asarhaddon's campaigns:

Initially he was successful in disputes against Bit Dakkuri and Gambulu . Around 680 BC Then King Asarhaddon defeated the Cimmerians who had invaded the country , a nomadic horsemen, near Hubušna . They then conquered Phrygia and wreaked havoc in Lydia . 677 BC The king of Sidon , who had revolted against the Assyrian rule, was defeated and beheaded in the 3rd century BC . His city was devastated and rebuilt as the "Port of Azarhaddon" while the Phoenician population was deported to Assyria. 676 BC A successful campaign in the Taurus Mountains followed . Meanwhile, Assyria had also Mannaeans ward on the northern border, as the Medes under their king Khschathrita the east. Assyrian advances apparently reached as far as what is now Tehran . The Zagros Mountains were secured by a series of fortresses. Melitene (Assyrian: Meliddu) was founded in 675 BC. BC (unsuccessfully) besieged. In the same year, an Elamite incursion directed against the city of Sippar was thrown back in southern Mesopotamia . This was followed by an Assyrian advance into the land of Bazu, which, according to the sources, was a dry landscape. In the 10th year of the reign ( palû ), Asarhaddon again advanced into Egypt and defeated King Taharqa . Memphis was captured and Taharqa had to flee to Upper Egypt. Asarhaddon now took on the title "King of Musur , Patros and Kush " as well as King of Egypt, victor over the King of Meluhha (Kalach D). He organized the administration of the new province and returned home with rich booty. He captured Ušanahuru, the king's son and the king's wives, and deported doctors, fortune tellers, dream interpreters, snake charmers and metal workers to Assyria, as well as people whose skin was as black as pitch. But as soon as he left Egypt, the land rose against the invaders. So Asarhaddon marched against Egypt again, but died on the way from his long-standing illness on October 27, 669 BC. In Harran .

Asarhaddon carried the title of great king ( Sarru rabû šarru ) , like all the kings of the Middle East who ruled over other kings , and he also called himself:

Other titles he carried: governor of Enlil , priest of Aššur, faithful shepherd, darling of the great gods, son of Sennacherib, son of Sargon II , dear scion of Baltil (= Aššur) and royal descendant of Bêl-bani .

As crown prince, Asarhaddon had a palace in Guzana or lived in the palace of the succession ( bît ridûti ). As king he used the royal palaces in Nineveh and Kalach . Access to the royal palace was precisely regulated. In the texts of the Nineveh State Archives there is a list of 14 authorized persons, including the royal scribe and members of his family and the chief scribe, Zer-Issar, the chief of public works ( rab pilkāni ) and the courtiers Musuraju and Arbaju. His chief scribe was Nabû-zehr-lešir , who came from a famous family of scribes, from 672 BC. His son Ištar-šumu-ereš , who was also the chief clerk of Assurbanipal. His deputy was Kanunaju. The clerk not only handled the correspondence, but also served as finance minister. Majordomus ( rab bēti ) was also a high court office. Both the king and the queen and the crown princes had a rab bēti . The chief eunuch was also an important court office. Milki-nuri, the queen's chief eunuch, is known by name. The office of the royal umbrella bearer does not seem distinguished at first, but the holder always had the king's ear.

The king and queen had separate courts. As a letter from the State Archives shows, even a servant from the queen's palace could not easily gain access to the royal palace. It is unclear whether the Queen Mother kept her own household; however, there are texts that mention a bet ummi šarri . The queen also had a palace in Kilizi .

The most important cities of the empire, in Assyria itself as in the subjugated countries, were administered by governors. Some of them are known by name:

Asarhaddon encouraged his subjects to contact him directly in the event of a betrayal of Assyrian interests or a conspiracy against the king, and indeed numerous letters have been received warning the king of conspiracies or reporting transgressions by incumbents, including several anonymous letters . In addition, he had special agents ( qēpu ) in the most important cities , who reported to him personally about the activities of the locals as well as the Assyrian governors:

Asarhaddon rebuilt the city of Babylon, which had been destroyed under Sennacherib (or by a flood, as Asarhaddon claimed). In particular, the Marduk temple Esagila and the ziggurat Etemenanki have been restored, as numerous building inscriptions show. Asarhaddon, following a very old tradition that goes back at least to New Sumerian times, was portrayed as a basket bearer, as did his sons Assurnasirpal and Šamaš-šhum-ukin later on. At the same time Asarhaddon took care of the expansion of Assur , where he had the Ešarra temple built.