The Pergamon Museum in Berlin district of Mitte is part of the architectural ensemble of the Museum Island and the World Heritage Site of UNESCO . Planned by Alfred Messel from 1907 to 1909 on behalf of Kaiser Wilhelm II in the neoclassical style , it was executed in a simplified form by Ludwig Hoffmann from 1910 to 1930 . It currently houses the antique collection with the famous Pergamon Altar , the Vorderasiatisches Museum and the Museum of Islamic Art. As part of the Museum Island master plan , the Pergamon Museum will be renovated by 2023 and will be partially closed. 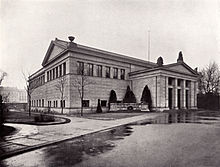 View of the first Pergamon Museum

The first Pergamon Museum was built by Fritz Wolff in 1897–1899 and opened on December 18, 1901 by Kaiser Wilhelm II . The portrait of Carl Humann created by Adolf Brütt was revealed . The atrium of the museum building at that time already contained other architecture from Pergamon , Priene and Magnesia .

After the demolition of the first Pergamon Museum in 1908, the Pergamene sculptures were housed in the eastern columned hall of the Neues Museum until the successor building was completed.

Since the monumental objects found during the excavations in Babylon , Uruk , Assur and Egypt could not be adequately shown in the first building and this soon showed damage (the foundation had sagged, but could have been repaired with the appropriate political will), it had existed since 1906 Plans by Wilhelm von Bode , the newly appointed general director of the Royal Museums at the time, who had been state museums since 1918, for a new building at the same location. In this, in addition to the ancient architecture in the north wing, the German art of post-antiquity in the Deutsches Museum, in the south wing the Middle East Department and (planned since 1927) the Islamic Art Department.

Since 1907, Alfred Messel planned the monumental three-wing building in tight neo-classical forms based on a concept by Wilhelm von Bode . After his death in 1909, his closest friend, the Berlin City Councilor Ludwig Hoffmann, took over the construction. In addition, the architects Wilhelm Wille , Walter Andrae were responsible for furnishing the Middle East Department, today's Middle East Museum with Hittite , Sumerian , Assyrian , Babylonian and Persian works of art, and German Bestelmeyer for furnishing the north wing with the collection of German art in the painting and sculpture gallery (the so-called " German Museum ") and Ernst Kühnel , who, together with Hoffmann, developed the Islamic Art Department, today's Museum of Islamic Art with the Mshatta facade , are involved in the project. Together with Theodor Wiegand , Ludwig Hoffmann developed the concept for the halls with the column structures made of Priene, Magnesia, Miletus and Pergamon as well as the hall for the Pergamon Altar discovered by Carl Humann and the market gate of Miletus . Construction work began in 1910 but was delayed by the First World War , the November Revolution of 1918 and the inflation of 1922/1923 . It was not until 1930 that the construction of the three-wing complex was essentially completed and the four museums within it opened. The portico originally planned by Messel and Hoffmann in the inner courtyard, the colonnade at the Kupfergraben and the fourth wing for the Egyptian Museum, which is located south between the Neues Museum and the Kupfergraben, remained unfinished .

The building presents itself as a deep three-wing complex oriented to the southwest towards the Spree . The high central building at the end of the long forecourt has no windows. The side wings each have a row of twelve colossal Doric pilasters above the base . The front sides of the side wings are widened, with a slightly protruding windowless wall towards the forecourt. The front sides of the Spree are slightly protruding and are occupied by a row of half-columns, each made up of six (also Doric) half-columns ; The gables rise above this and the surrounding eaves on both side wings .

The outer facade consists of Franconian and Oberdorla shell limestone from Thuringia ( Triassic ), Lusatian granodiorite ( Precambrian ) and Beucha granite porphyry ( Permian ) from Saxony as well as Bale limestone ( chalk ) from Croatia . In contrast to the solid natural stone panels, the less representative facades - north facade (towards Bode Museum) , east facade (towards Hackescher Markt ) and south facade (towards Neues Museum) - are made of stone-imitating stone plaster . This dark gray plaster, cement-bound with natural stone granules , has been modeled with dummy joints and a stonemason-like treatment, corresponding to the natural stone blocks.

During the current general renovation of the Pergamon Museum, an examination of the historical structures on the building was carried out, which documents the engineering achievements of the responsible city planning officer Wilhelm Wille and the civil engineer Otto Leitholf , who responded with numerous special constructions to the spongy subsoil. 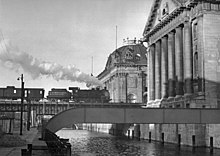 The Museum Island with the Bode Museum and the Pergamon Museum, 1951

The Pergamon Museum was badly hit during the air raids on Berlin in World War II . Many of the exhibits have been moved to safe locations, and some of the monumental pieces have been walled in. In 1945 a large part of the Exposita was transported by the Red Army to a large Stalin Victory Museum in Moscow and Leningrad . In 1954, the Milet Hall, the first hall of the antiquities department, was reopened, and in 1955 the Hellenistic Hall, modified by Elisabeth Rohde, among other things by transferring the Hephaistion mosaic. In 1957 and 1958 the Soviet Union returned a large part of the holdings to the GDR . The Pergamon Altar was largely rebuilt by Carl Blümel and Elisabeth Rohde in the 1930 staging, but the Deutsches Museum was not rebuilt. Most of the collections shown in it were located in the Gemäldegalerie and the sculpture collection in West Berlin in the Museum Center Berlin-Dahlem . Other holdings were burned in the Friedrichshain flak bunker or are still in the depots of the Pushkin Museum in Moscow and the Hermitage in Saint Petersburg, in violation of international law . The return of these holdings, including the famous Priam's treasure , was contractually agreed between the Federal Republic and Russia in 1990 , but has so far been prevented by the Russian Parliament and museum directors in Moscow. The Pergamon Museum housed the Antikensammlung, the Vorderasiatisches Museum, the Museum of Islamic Art, the East Asian Department , which was newly founded in the GDR, and the Museum of German Folklore ; the latter two moved out again in the early 1990s and were merged with their sister departments in Dahlem .

Each of the departments was originally named independently. Only since 1958 has the entire building been called the “Pergamon Museum”, which until then was reserved for the halls of the antique collection in the east wing. 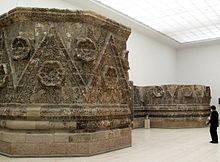 The Ishtar Gate from Babylon

The Pergamon Museum contains collections from three museums: the Collection of Antiquities , the Museum of Islamic Art and the Museum of the Near East . The museum shows various pieces of ancient monumental architecture, among the most important and well-known exhibits

In 2007, the Pergamon Museum was the most-visited Berlin museum and the best-visited German art museum, with around 1,135,000 visitors. Apart from 2004, it has been the most visited museum in Berlin since 1999.

In the Vorderasiatisches Museum exhibits from archaeological excavations by German scientists, including those of the German Orient Society , are shown, which were excavated in the area of ​​the Sumerian, Babylonian and Assyrian civilizations. This includes many monumental monuments, reliefs and also smaller cult, jewelry and everyday objects.

Particular attractions are the Babylonian Ishtar Gate, part of the processional street in front of it and the throne room facade of Nebuchadnezzar II.

As part of the Berlin Museum Island master plan , the Pergamon Museum is to be connected to the Bode Museum , the New Museum and the Old Museum by an archaeological promenade . As a new entrance building, the James-Simon-Galerie offers one of the entrances to the main tour of the Pergamon Museum.

In 2000, an architectural competition was announced for the renovation work, which the Cologne architect Oswald Mathias Ungers won. Among other things, "with a supplementary fourth wing, a main tour is to be created that combines the monumental architecture of the Egyptian and the Middle East Museum, the Collection of Antiquities and the Museum of Islamic Art." The Museum of Islamic Art will move to the north wing, which housed the German Museum until the Second World War.

Despite the renovation, the house recorded a total of around 804,000 visitors in 2019 and was thus able to increase the previous year's balance by around 24,000 visitors.