Pilasters at the County Courthouse in Sidney, Ohio (USA)

A pilaster (from Latin pila "pillar") is a pillar-like form element of architecture .

The pilaster is a partial pillar incorporated into the wall structure , which is also known as a wall pillar. It can have a load-bearing static function, but does not have to have this. Similar to the " half or blend column ", the pilaster can be an element of the pseudo architecture in plaster and stucco . The German expression "Reliefpfeiler", which is better known as the longest palindrome word, is then rarely found . Its main architectural purpose is the vertical division of exterior or interior wall surfaces. In contrast to the pilaster strip , it has a base , capital or fighter .

A special shape is the “Hermenpilaster”, the shaft of which tapers downwards like a Herme . Such forms are found mainly in the late Baroque Spanish style of Churriguerism . 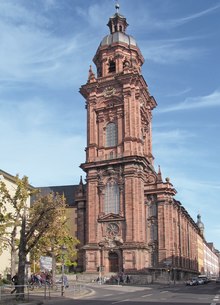 New church in Würzburg . Right: Colossal pilasters that serve as buttresses and were installed around 1700

Pilasters that extend over several floors of a colossal order are called colossal pilasters . In this form they can also serve as buttresses .

Pilasters were already used to design and structure walls in ancient Greek architecture , and Roman architects also made extensive use of them. The architectural motif was equally popular in both Romanesque and Gothic architecture. In the Renaissance , the pilaster was one of the most common means of structuring, for example on the facade of the Palazzo Rucellai in Florence , and was then used as the dominant facade as a structural element as well as a structural element in interior design from classicism to historicism . From there it also goes over to contemporary furniture design, where the paneling is structured in a pilaster shape with the framing frames .

The pilaster disappears with the reduced formal language of modernity , which only makes elementary construction contexts visible to the outside. Only since Brutalism has it been found again in its functional, load-bearing form as an outward-looking element of the skeleton construction in concrete, albeit pilaster-like with no base and head elements, unless the frame construction requires it.