The Torre Blancas , designed by Francisco Javier Sáenz de Oiza and built in 1961, uses exposed concrete as a design element

Brutalism is a modern architectural style that spread from 1950 onwards. The term has its origins in the French béton brut ('raw concrete', exposed concrete), with which Le Corbusier described his preferred material. The term New Brutalism, coined by Reyner Banham , originally stood for an architecture that had the idealized claim to be honest about materials and construction and ethical about the social aspects of architecture.

Today the term is less narrowly defined and stands for the dominant architecture between around 1960 and the beginning of the 1980s. It is now received mostly negatively. Brutalism is characterized by the use of exposed concrete , the emphasis on the construction, simple geometric shapes and mostly very rough elaboration and structuring of the buildings.

In 1953, the team of architects Team 10 was founded, which later coined the term 'New Brutalism' to differentiate it from Le Corbusier. It was first mentioned in December 1955 in Architectural Review by Reyner Banham . Despite the emphasis on concrete, this style also allows other materials such as metal, brick or stone. An example of this style is the Hunstanton School by Alison and Peter Smithson from 1949–1954, a brick building with visible supply lines.

Brutalism was linked in a specific way to the economic and material, but especially to the mental and psychological situation of the post-war period. On the one hand, this made it an international phenomenon, but on the other hand it was based on local conditions. Brutalism spread to all continents in the 1960s and remained present until the 1980s. The representatives of this type of construction believed that modern industrialized societies need art that is as powerful as possible. They should “experience spiritual liberation, be made to see, experience sensuality instead of commerce”. This is also expressed in the underlying French word “brut” in that it not only means “raw”, but also “rough”, “coarse”, “tart” or “honest”.

In the 1990s, the architectural style fell into disrepute, the architects and town planners now pursued a kind of rebirth of the bourgeois city, brutalism was seen as "aesthetic vandalism". This impression was reinforced by the fact that the buildings in question did not appear to be well maintained, and the concrete was more susceptible to dirt, algae growth or decay than expected.

It was not until the beginning of the 21st century that a phase of rediscovery of brutalism began, especially in the face of demolitions or disfiguring renovations.

“[...] In view of the many granite facades of greedy postmodernism, which sound hollow when knocked , it now appears as a rough but 'honest counter-image', as the built memory of the compensatory social-democratic welfare state, in which social egoism is considered degoutant . "

Examples from different countries and continents 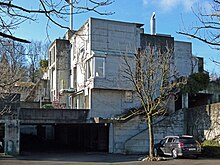 Typical building in the Thalmatt settlement

Not only individual buildings belong to Brutalism, entire settlements or educational complexes were created under the influence of this style.

To be mentioned here are: