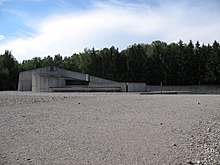 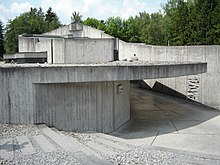 The Reconciliation Church is a Protestant church that was built from 1965 to 1967 on the site of the Dachau Concentration Camp Memorial according to plans by the architect Helmut Striffler .

Prehistory and laying of the foundation stone

Originally there were considerations to create a meditative place for all confessions on the site of the former Dachau concentration camp . When this could not be achieved, the Evangelical Church in Germany thought of an atonement cross in an atrium , since the Protestant Church's largely non-existent opposition to National Socialism and its disregard for people initially made the construction of a church in the concentration camp memorial unsuitable. At the express request of former prisoners, a church was built.

The foundation stone was laid on May 8, 1965 by President Kurt Scharf . The Church of Reconciliation was consecrated on April 30, 1967. The first preacher was Pastor Martin Niemöller , once a prisoner himself in the Dachau concentration camp.

Shortly after German reunification, the federal government decided to severely restrict the right to asylum. Roma from south-eastern Europe were also directly affected . Hundreds of people therefore sought protection from deportation in the concentration camp memorial: the Protestant Church of Reconciliation there became a Roma refuge from May 16 to July 8, 1993. Bavaria's Interior Minister Günther Beckstein threatened to have the concentration camp memorial cleared. In the end, the Roma were given free travel; almost all of them were ultimately deported to regions of Yugoslavia destroyed by the civil war .

A sacrament service is celebrated every Sunday in the Church of Reconciliation . Today thematic events and exhibitions are held regularly. The employees guide you through the former concentration camp, offer and mediate discussions, get involved in various initiatives around the memorial and take part in the annual international youth meeting in Dachau.

With the Reconciliation Church, the architect Helmut Striffler succeeded in building a building that combines contradictions in an impressive way. The architectural concept of the church is characterized by contrasts: it wants to be present on the site of the memorial, but not imposing itself. She wants to address people of today and at the same time respond to an unimaginable story. It wants to give space to the celebration of the divine service and enable the confrontation with suffering and crime. It wants to invite people to talk and encourage them to quiet down. She wants to offer information and lead to prayer. It wants to remind people of the persecuted as well as the guilt of the persecutors. So the symbolism of the building can always be read and understood several times.

The exterior looks puzzling, it provokes questions. A large flight of stairs leads down. Their shape is reminiscent of open arms - one arm outstretched towards the memorial, the other facing the Catholic Agony Christ Chapel and the Jewish place of prayer: everyone is welcome here. The staircase, which narrows down, resembles the entrance to a cave. The “path into the depths” can be taken as a “path of shame” or as a “path of mourning”, it can be understood as “immersion in memory” or as a “search for refuge”.

On the right-hand side, two reliefs by Hubertus von Pilgrim are set into the wall: recumbent figures, human forms, barely recognizable - a slight inkling: tens of thousands of fates, most of them forgotten. Further access is threatening. It's narrow and dark. Some light falls through a narrow gap. The look ahead is all the more hopeful. Where the inner courtyard begins, the visitor can expect glistening light. At the borderline between this light and the previous darkness there is a hinged steel gate by Fritz Kühn . Words from Psalm 57 are engraved in four languages: "Refuge is under the shadow of your wings".

Even if the bright courtyard seems liberating at first, something oppressive remains: its baldness and squareness are reminiscent of the architecture of the concentration camp, the walls of executions . This courtyard connects two rooms that are related to one another by high glass walls: the discussion room on one side and the worship room on the other. Both rooms manage without any right angles, the floor and ceiling are sloping, the walls are irregular. Liveliness and uniqueness are contrasted with the terror of order and the uniformity of the concentration camp.

The entrance area of ​​the discussion room is characterized by Carel Kneulman's bronze statue “The three men in the furnace”. Three figures merge into a single flame that blazes like a scream to heaven. The inscription on the base, Daniel 3: V.18 , refers to the biblical source - a story of three men who refused idolatry and were ready to die by fire, from which they were, of course, wonderfully saved.

The church service room opposite, despite its lively curved walls, appears rather sober and barren. He is completely focused on the essentials: altar table, community benches, lectern, burning candle, and in a central place Fritz Koenig's cross - unusually breaking out of a metal block.

One looks in vain for color in this church space. Only the narrow window by Emil Kiess sets an impressive accent with the color red: a bright red "drop of blood", a symbol of both death and life. On the way to the exit one is accompanied by words from Psalm 130. The way leads slightly upwards, as a sign of hope.