A semi-detached villa in the Sachsenhausen-Nord district was converted for the museum . After the gutting, a white reinforced concrete construction was placed inside the house , a house-within-a-house. The house was inaugurated in 1984 . An exhibition hall was built on the former garden area, and an entrance zone facing the Main was placed in front of the house, which significantly changed the historical impression of the villa. This building is not only a house for architecture, but also one about architecture , according to the architect Oswald Mathias Ungers , who was also supposed to rebuild the Pergamon Museum . Shortly after its opening, the DAM was placed under a preservation order and was carefully edited during the latest renovation in 2011.

The DAM is part of the Frankfurt Museum Mile along the banks of the Main in Sachsenhausen, which was planned and set up under the head of the cultural department, Hilmar Hoffmann , back in the days of the financially strong banking city tradition . The art and architecture historian Heinrich Klotz from Marburg, who also became the museum's first director, was responsible for the conception .

In the 1990s, visitor numbers began to decline. Drastic cuts in funds and the discussion of a closure or relocation to Berlin seemed to mean the end of the DAM at times. 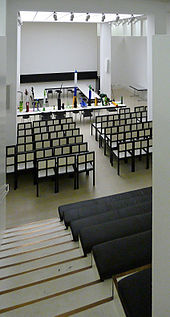 In 2001 the DAM was renovated and reopened. Not only was the building completely overhauled, new tasks and goals were also set. There should also be exhibitions by contemporary architects , the information and staging should be equally understandable for experts and laypeople, the experience and entertainment character should be strengthened and the house should become a meeting place for industry, business and architects.

Under the direction of Ingeborg Flagge (2000–2005) the museum more than tripled its number of visitors. Since April 1, 2006, Peter Cachola Schmal has been in charge of the museum.

The German Architecture Museum has been the publisher of the annual German Architecture Yearbook since 1980 , in which a changing jury presents a selection of outstanding works of architecture from the previous year. The DAM Prize for Architecture has also been awarded in this context since 2007. Parallel to the yearbook, the architecture museum is showing an exhibition in which the selected buildings are presented.

The German Architecture Museum shows several exhibitions every year, the ones listed here are only a selection:

Today the DAM defines itself not only as a museum, but also as an exhibition hall. It lives not only from a permanent collection, but from constantly new exhibitions. As a museum, it must continue its current tradition of collecting and buying in the future, but the classic forms and traditional content must be presented in a contemporary way so that they are relevant for present and future generations. says the museum management. The DAM wants to make its exhibitions more attractive and sensual than before. Not only the final architectural result is exhibited, but the way to get there.

The most important task for the DAM is to manage the balancing act between architecture as an aesthetic building art for a few and architecture as a topic for many. The aesthetic dominance of classical cultural elites may not have completely served its purpose today, but it is no longer the only cultural yardstick. Today's art and culture mediation must also be seen under the aspect of experience and entertainment value.

The DAM is a Frankfurt museum that has held international architecture exhibitions since it was founded. Nevertheless, neither the federal government nor the state of Hesse provide financial subsidies. The city of Frankfurt finances the houses (museum and archive), the staff and the operating costs and a budget that makes up about a third of the costs. All exhibitions, publications and events, however, must be co-financed by sponsors .

The DAM awards a number of awards: