This article covers the structure. For the metric term see Stollen (literature) , for the mathematical term see Bruhat Tits building . 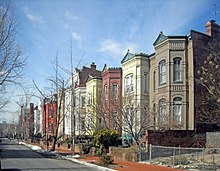 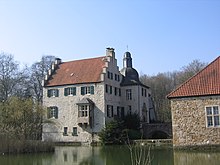 A building is a structure that encloses rooms , can be entered and is used for the residence of people, animals or the storage of things . A building does not necessarily have walls or a basement , but always a roof . Otherwise, the properties of a structure also apply to a building. Some definitions take the term a little narrower and limit it to structures that rise above the ground .

The state building regulations of the German federal states usually define as follows: "Buildings are independently usable, covered structures that can be entered by people and are suitable or intended to serve the protection of people, animals or things." ( Model building regulations ).

The Austrian building regulations, building laws and building technology laws of the federal states define the buildings as “covered, all-round or predominantly enclosed structures that can be entered by people.” The structure is “a system that is connected to the ground and for its professional production structural engineering knowledge is required ". With regard to the ancillary buildings , it is also stated "whether in the case of a connection with a main building there is an attached annex or a structural unit with the main building, i.e. an extension to this, depends on the structural design and the functional context of the independent building or a mere building parts of the building to be qualified building from. "

As with the term building, there is no uniform or binding, generally recognized categorization. One can differentiate according to various aspects:

According to construction and material

When differentiating between functions, there is no uniform or binding categorization. Some functions are:

There are free-standing buildings (single houses) as well as semi-detached houses and groups of houses in open construction . Building ensembles are made up of several individual buildings, e.g. B. a three-sided farm . In the closed development , the individual building no longer appears so clearly as a single object, but several buildings together form a building block (surrounded by streets), a building complex or a larger element of the urban structure; Nevertheless, a distinction is made between the front, transverse and rear buildings , and between corner and central buildings.

From a legal point of view

According to energy standards

There are low-energy houses , passive houses and so-called plus - energy houses . These are different energy standards that make a statement about the energy requirements of the building.

The largest building in the world is the New Century Global Center in Chengdu , China , which opened in 2013 . It is 100 meters high, about 500 meters long and 400 meters wide. Inside are hotels, shopping streets and a water park. The Commerzbank Tower is the tallest building in Germany. The longest building is the former KdF-Seebad Rügen in Prora .