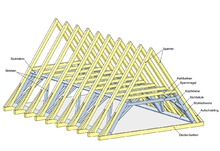 Historic collar beam roof with reclining chair; the actual roof structure in the narrower sense is shown in blue.

As a timber , the area of is building industry designates which the building material wood uses, but also in wood construction built building itself. In addition to solid wood are also wooden materials used.

The importance of timber construction in the respective regional building scene and which buildings are usually realized as timber structures vary from culture to culture or from region to region. In the Central European area, especially in the regions of the German-speaking area, z. B. barns , sheds and simple huts are particularly often built as pure wood structures, while residential, commercial and office buildings are rarely made of wood.

Components made of wood

The largest self-supporting wooden roof in the world is on the fair in Hanover and was built for Expo 2000 . It is an example of a flight roof consisting of connected mushroom roofs.

For individual parts that have a load-bearing or stiffening function, parts 2 and 3 of DIN 68800 as well as the fire protection guidelines apply and only the types of wood listed in DIN 1052-1 or those with a general building approval (abZ) by the German Institute for Construction technology used in Berlin.

Traditionally, simple wooden beams are used as girders or supports. However, there are also more complex constructions, for example made of glued laminated timber.

The most common shape of a ceiling, where wood is the load-bearing structure, is the wooden joist ceiling.

Freestanding wooden walls, e.g. B. in horticulture or (historically) in military city fortifications are often designed as palisade walls.

Sketch of a roof structure made of trusses (triangular truss)

Traditionally, roof structures are almost exclusively made of wood. In Europe, the most common roof constructions are on the one hand the purlin roof and on the other hand the rafter roof . Different forms of roof trusses allow different structures. Wood is still predominantly used today, especially in constructions for roofs with manageable dimensions. In contrast, the roof skin is often not made of wood materials. 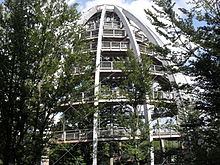 Tree tower with a platform at a height of 44 m. The spiral staircase is about 500 m long.

Even complex vault or dome structures can be made from wood. 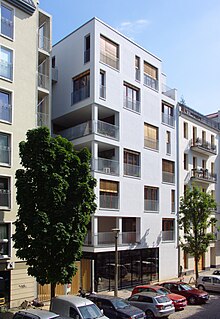 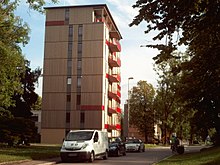 Wood has been used as a material for building buildings for thousands of years. Already in the Stone Age were stilt houses built. Wood is durable: in China there are temples that, like half-timbered houses in the Alpine region, have survived for centuries. Wood can be used in many ways. Complete wooden structures are used both in multi-storey buildings (e.g. residential buildings ) and in hall buildings . There are very different constructions that are exclusively or predominantly made of wood. In principle, a distinction is made between skeleton and solid construction methods, and also between carpentry constructions and timber engineering.

Among the traditional wooden construction methods (carpentry constructions), the following are to be mentioned in particular:

Also masts and towers can be built in wood. Traditionally, round timber was or is still used in some cases as masts for telephone lines or for shipbuilding. More elaborate masts can also be constructed as a timber frame construction. As a rule, however, transmission , high-voltage or wind turbine masts are now made of reinforced concrete or steel.

Closed towers made of wood could (as of 2010) be more advantageous than structures made of concrete. They are possibly more durable than steel towers, since wood does not show any material fatigue as a result of load changes .

A first prototype was built in Hanover-Marienwerder in October 2012 and put into operation in December 2012. A 1.5 MW wind power plant from the manufacturer Vensys (weight approx. 100 t) was installed on a 100 m high wooden tower from "Timbertower GmbH". The wooden tower consists of 28 floors and has a stable octagonal outer wall about 30 cm thick made of plywood. About 1000 trees were felled to produce this tower (approx. 400 m³ of wood = approx. 200 t). About seventy lightning rods protrude from the tower wall. A UV-stable PVC film is the protective outer skin of the tower.

The Gleiwitz transmission tower from 1935 in Poland is 118 m high and is the highest currently existing wooden tower in the world. The Mühlacker transmission tower (in D) (1934–1945) was probably the highest ever at 190 m. In the 1930s, in Germany in particular, around 2 dozen wooden towers of 90 m and more were built, mainly for medium-wave transmitters. The fact that wood conducts electricity poorly allowed the electromagnetic waves to propagate through the structure of the wooden mast from an antenna wire stretched axially inside. Medium wave transmitter for wavelengths around 200 to 300 m required antenna lengths and mast or tower heights of 100 m and more.

Bridges and viaducts made of wood

Numerous universities offer diploma and specialization courses in wood construction or wood technology in the field of civil engineering . Among others at the following institutions: