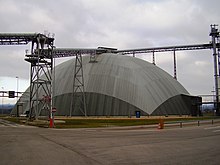 The Saldome and Saldome2 are two dome-shaped warehouses for road salt in Rheinfelden in Möhlin in the Swiss canton of Aargau . They were created directly at the entrance to Möhlin, near the Riburg district , on the site of the Riburg salt works of the Swiss salt works . They were designed and built by the wood technology company Häring from nearby Pratteln .

The building has a diameter of 93 meters and a height of 31 meters. It was built in April 2004 and put into operation in August 2005 after a one-year construction period.

With 80,000 tons of salt, the hall has around twice the capacity of a normal warehouse, but due to its design approximating the spherical shape, it only consumes half as much building materials (mainly 1,500 cubic meters of untreated wood, corresponding to around 400 old trees from about 80 to 100 years). About 60% silver fir was used, 40% spruce (all from nearby forests). The wooden construction has technical reasons, neither concrete nor steel would withstand the enormous salt load in the long term. It also meets ecological criteria: the silver fir and spruce for the supporting structure come to a large extent from the nearby Rheinfelder Forst and were processed untreated by a Swiss timber construction company to create the supporting structure made of glued arched beams. The salty air, on the other hand, will preserve the wood.

With commissioning, the Rhine salt works in Riburg were able to double their central storage capacity to around 150,000 tons. This corresponds to about one and a half times the average annual requirement. De-icing salt bottlenecks, such as those that occurred in the winters of 1999, 2003 and 2005, should no longer exist in the future. On average, around 100,000 tons of de-icing salt are required every year.

The structure consists of three interpenetrating arch systems that form a wooden mesh shell. In each of its 163 nodes, six arch parts made of glued laminated timber are screwed into a central tube. The nodes are in turn connected to one another by around 400 girder beams. This construction was designed by the wood technology company Häring.

The building was honored with the Global Eco-Tech Award 2005 on the occasion of the World Exhibition 2005 in Aichi / Japan . 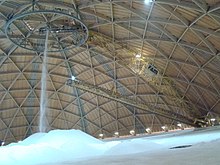 The new Saldome 2 from the inside.

Construction of the Saldome2 began on June 6, 2011 . This has an even larger dome with a diameter of 120 meters and a height of 32.5 meters. It has a capacity of well over 100,000 tons of salt and was inaugurated in May 2012. Around 1,300 cubic meters of wood were needed for the futuristic-looking dome. That corresponds to about 500 stately trees, all of which were between 80 and 100 years old. Saldome2 was also built by Häring.