Riburg ( Swiss German : [ ɾiːbʊɾɡ ], formerly [ ɾyːbə̆ɾɡ ]) is a municipality Möhlin and referred to in the Rheinbogen level situated between Möhlin and Rheinfelden to about 290 to 300 m above sea level in the district of Rheinfelden of the Swiss canton of Aargau . The earlier spelling "Ryburg" is still used today by local associations and residents, power plants and in connection with historical topics and in proper names. 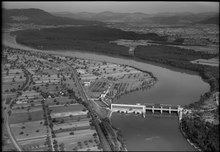 The Riburg district is located north of the Basel - Zurich railway line , which essentially forms the border with Untermöhlin. Riburg has its own coat of arms, was previously not structurally connected with Möhlin and had certain autonomous rights. In 1840 Riburg tried to separate from Möhlin and to regain independence. This project failed because the canton of Aargau refused to give its consent. The rejection of the parish separation was u. a. due to the fact that Riburg supposedly could not have survived financially as an independent community. Today Riburg has completely grown together with Möhlin. Nevertheless, the special relationship between Riburg and Möhlin is still present in the minds of the population today. This is particularly evident at the local carnival, where the relationship between Möhlin and Riburg is a popular subject. The large industrial area of ​​Möhlin is located in the east of Riburg. It has a connection to the Basel-Zurich railway line as well as to the A3 motorway via an industrial feeder.

In the western Riburg area, in Rheinfelden on the border with Möhlin, there is the Riburg salt works of the Swiss saltworks , which have their own connection to the Basel-Zurich railway line at Möhlin station. They were founded in 1848; the old wooden derricks can still be seen today. In 1973 the plant was rebuilt, which was a pioneering achievement across Europe at the time. The hourly salt production of the salt pans is about 54 tons. From 2004, a new salt storage hall, the so-called Saldome , was built on the site of the salt works, directly at the entrance to Möhlin . 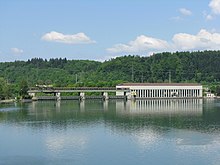 Ryburg-Schwörstadt power plant from the upstream side

The Ryburg-Schwörstadt power plant is located on the Rhine in the north of the Riburg area . The power plant, which is located in the municipal area of ​​Rheinfelden and Schwörstadt, was put into operation in 1930. It has an average annual production of 760 million kWh with an output of 120 MW. Pedestrians and cyclists can use the facility to cross the border between Germany and Switzerland .

Riburg is shown as an independent village in the following historical maps: