Cordyline ( Cordyline ) are a genus of subfamily of lomandroideae in the family of asparagaceae (Asparagaceae) within the order of the asparagus-like (Asparagales). Many species that were earlier in this genus have been placed in the Dracaena genus . Cordyline form club-shaped storage lumps at the roots (German name!). Some species and varieties are ornamental plants . Some species and especially their varieties have variegated leaves, often red, which is why they are used as ornamental plants in frost-free areas in parks and gardens, but also as indoor plants . 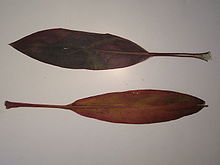 The deciduous leaves of Cordyline fruticosa are divided into leaf sheath, petiole and leaf blade 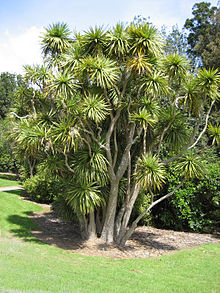 The Cordyline australis originating from New Zealand has found widespread distribution in Europe, especially in the coastal areas of Ireland and Great Britain.

There are perennial herbaceous and woody species. The lignified species are only tree-shaped or shrub-shaped life forms and not trees. The more or less woody shoot axes are usually not very branched with clear leaf scars. The alternate leaves stand together in a rosette. The leaves are divided into leaf sheath, petiole and leaf blade. Sometimes a petiole is missing, otherwise it is 10 to 30 cm long. The more or less wide leaf blades have largely parallel leaf veins , but with side veins that extend from the midrib.

Branchy, relatively large panicle inflorescences develop in the leaf axils of the uppermost leaves . The mostly short-stalked flowers are hermaphroditic and threefold. The six identical bloom bracts are tubular, bell-shaped to almost cylindrical fused. The six stamens are fused with the flower envelope. Three carpels have become a top permanent ovary grown from two to many ovules per ovary chamber. The slender stylus ends in a small, heady scar.

The leathery berries contain one to a few seeds. The seeds are black due to phytomelanin .

Their distribution area extends from Papua Asia to the islands in the western Pacific, from Bolivia to southern South America and also includes the Mascarene Islands. Eight species are native to Australia .

Detail from an inflorescence of Cordyline stricta

Cordyline stricta , habit with a woody trunk and inflorescence

The genus of club lilies ( Cordyline ) includes about 24 species:

The genus Cordyline was previously placed in the families Agavaceae , Liliaceae or Asteliaceae .

In the central highlands of western New Guinea , a Cordyline species is a sacred plant among the Eipo . It is planted at the men's house. This rite is a symbolic repetition of the process of creation.

In Polynesia, the sacred and auspicious Ti or Kī plant ( Cordyline terminalis or Cordyline fruticosa ) was planted not far from the temple complexes ( marae ). The Polynesians made black tattoo ink from the burnt parts of the plant . Okolehao schnapps is made in Hawaii from the fermented rhizome of Cordyline fruticosa .

In New Zealand, the starchy stems and fleshy rhizomes of both Tī Pore or Dwarf Cabbage Tree (Cordyline pumilio) and Tī Kōuka , Cabbage Tree (Cordyline australis) are steamed by the Maori to produce the sweetener kāuru . The delicate tips and the inside of the leaf were eaten raw as vegetables. The taste of Tī Kōuka (Cordyline australis ) was considered to be superior to that of Tī Pore (Cordyline pumilio) . The kāuru, made from the Cordyline fruticosa , imported from Polynesia, was considered to be the tastiest sweetener .