The University of Natural Resources and Life Sciences, Vienna sees itself as a pioneer in sustainable development and in building a green economy through the interaction of research, teaching, business and society. Your mission is 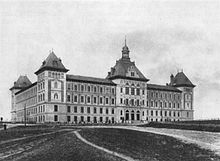 University of Natural Resources and Life Sciences, Gregor Mendel House in a photo from 1896

The kk Hochschule für Bodencultur was founded in Vienna in 1872 with a rectorate and dean's constitution; the opening took place on October 15, 1872. One of their founding fathers was Joseph Roman Lorenz . In 1872/1873 the agricultural section was set up in Palais Schönborn in Vienna-Josefstadt , Laudongasse 17. In 1874 the support association for needy and worthy students of the university was founded. The dissolution of the kk forest academy in Mariabrunn in 1875 led to the transfer of forestry studies to the university; This was followed by the establishment of the forestry section in Vienna-Josefstadt, Skodagasse 17. In 1883/84 a three-year course for cultural technicians was introduced as a third field of study .

In 1887 the deanery constitution was repealed; henceforth the university was run only by a college of professors chaired by a rector . In 1896 today's main building was opened in Gregor Mendel- Strasse (in the 18th and 19th districts of Vienna - at the Türkenschanze ). In 1906 the university received the right to award doctorates; the first to receive a doctorate was the forest scientist Rudolf Jugoviz . In 1911/1912 the university was expanded with the Adolf von Guttenberg House (formerly an agricultural and forestry museum). In 1917 the title of "engineer" was introduced for graduates. In 1919 women were admitted to study for the first time, but some professors generally considered them unsuitable. In 1930/31 the university premises were expanded to include the Justus von Liebig House.

In the interwar period, the university was not only geared towards German nationality, like most other Austrian universities, but also openly anti-Semitic and not infrequently influenced by National Socialism , in which professors as well as students played a part. In 1923 the college of professors passed a resolution directed against Jewish students, which was followed by many more. The swastika was used in the student body as early as the early 1920s. After the “election victory” of the NSDAP on March 5, 1933 in the German Reich, a follow-up rally was held on March 7, sponsored by Vice-Rector Olbrich; Advertising posters for the SS were allowed by the rectorate.

The Dollfuss dictatorship therefore ousted the rector's office on May 3, 1934 by appointing Federal Commissioner Otto Skrbensky (1887–1952). He had the right to expel students from the college and had five professors dismissed. In 1934 a police station was set up in the main building of the university. Professor Hans Karl von Zessner-Spitzenberg , who was opposed to National Socialism, died on August 1, 1938 as a result of a beating in the Dachau concentration camp .

In 1960 the Wilhelm Exner House was completed. In 1972 the university celebrated its centenary. Three years later it was renamed the University of Natural Resources and Life Sciences Vienna and the university complex was expanded again with the Franz Schwackhöfer House. In 1980 an institutional structure took place. In 1984 there were two extensions of the BOKU by the Türkenwirt and the Adolf Cieslar-Haus (former boarding school). In 1995 the food and biotechnology course (until 1984 food and fermentation technology) celebrated its 50th anniversary. Just two years later, the 125th anniversary of the BOKU was celebrated. In 2001, as at all other universities, tuition fees were introduced , some of which were abolished nationwide in 2008.

As part of a restructuring based on the Universities Act (UG) 2002 , the previously independent institutes were converted into 13 departments with subordinate departments and institutes. There are currently 15 departments:

BOKU is also a member of the Alliance of Sustainable Universities , which was founded in 2012 with the aim of promoting sustainability at universities.

With the 2004/2005 academic year, all courses at BOKU were converted to Bachelor and Master courses. A three-tier study system was thus introduced - bachelor's degree, master's degree and doctorate. The previous diploma courses can no longer be started, only completed. At the university there are eight (including one jointly established with the University of Veterinary Medicine, Vienna ) bachelor's degree, 28 master's degree and ten doctoral degree.

In the course of the reform of the University Act 2002 , all Bachelor curricula were revised. By successfully completing the bachelor's degree with a standard study period of six semesters, the graduates now acquire the academic degree "Bachelor of Science" (abbreviation BSc or B.Sc.). This gives you the option of either entering a suitable profession or completing a master’s degree. All bachelor's programs comprise a total of 180 ECTS points .

The master’s program with a standard period of four semesters is completed with the academic degree of Diplomingenieur (abbreviation DI or Dipl.-Ing.). Exceptions are in some cases the international master’s programs, in which master’s degrees are awarded. All master’s programs comprise a total of 120 ECTS points . 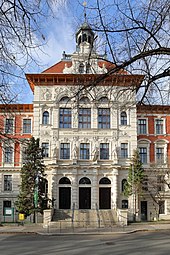 See also : List of honorary doctorates from the University of Natural Resources and Life Sciences, Vienna

see: List of Rectors of the University of Natural Resources and Life Sciences, Vienna 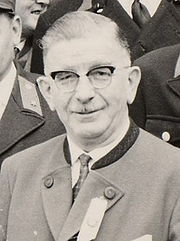