The Academy of Fine Arts Vienna is a state art academy in Vienna and one of the oldest art academies in Europe.

The Vienna Art Academy was founded in 1692 as a private academy by the court chamber painter Peter Strudel based on the model of the Accademia di San Luca , for which he made rooms available in the Strudelhof he had built. The academy was sponsored by Josef I. and converted into an imperial institute in 1705. After Strudel died in 1714, the academy's activities were temporarily suspended. 1725 took place under Charles VI. by Jacob van shed a new foundation as Kk Court Academy of painters, sculptors and architecture which, in 1731 in the Schoenbrunn House moved among the Tuchlauben. After 1740 she received less and less support from the court, so that she was moved to van Schuppen's private house and finally ceased teaching. In 1750, the court academy was placed under the supervision of the court building director Adam Philipp Losy von Losinthal , who revived it after van Schuppen's death in 1751, when protector initially also took over its management and gave it a rectorate constitution. 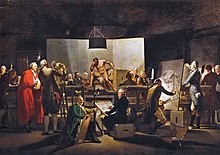 Jacob Matthias Schmutzer founded the "kk Kupferstecher-Academie" in Vienna in 1766, which was soon amalgamated with the "kk Academy of United Fine Arts".

In 1772, all of the art schools that existed in Vienna at that time were merged to form an academy of “united fine arts”. In 1786 the Academy moved to St. Annahof (Vienna) . Public art exhibitions were held there.

In 1872 the academy received university status.

In 1995 the Academy was given the Semperdepot as a studio house.

In 1998 the academy - while retaining the name Academy of Fine Arts - became a university.

In 1999/2000 the structure according to master schools that had existed since 1850 was replaced by the following university institutes:

The student protests in Austria in 2009 began with the joint occupation of the Academy's auditorium by students and teachers. Martina Pfingstl , one of the initiators, was elected as the first female student to chair the Senate of an Austrian university a short time later .

On May 7, 2019, Johan Frederik Hartle was elected Rector of the Academy of Fine Arts Vienna by the University Council. He succeeded Eva Blimlinger in this role on October 1, 2019 .

The building on Schillerplatz

Since April 1, 1877, the academy has been located in the academy building on Schillerplatz in Vienna's 1st district. In connection with the construction of the Ringstrasse, the new academy building was approved in 1871. The plans for this project come from Theophil Hansen (1813-1891), the director of a special school for architecture at the academy. The construction work on the Kalkmarkt (today Schillerplatz) devoured 1,200,000 guilders and lasted until 1877. The building of the academy was built in the style of the Italian Renaissance, four storeys with raised protrusions. On April 3, 1877 was the grand opening of the new building in the presence of Emperor Franz Joseph I . The artistic design of the interiors lasted until 1892; the ceiling paintings in the auditorium are by Anselm Feuerbach .

In the years 1898 and 1910 Otto Wagner presented drafts for the new building of the academy on the Schmelz , but these were never realized. 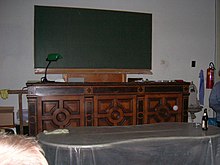 The anatomical hall of the Academy of Fine Arts in Vienna

The anatomical hall in the basement of the Academy of Fine Arts has remained almost unchanged, only the pedestal is from 1928. A particularly valuable piece is the dissecting table with a marble top, which is provided with channels and an opening in the middle for body fluids derive. The hall with the benches arranged in a semicircle does not get any daylight, which is why it is more suitable for theoretical lectures than for drawing. Only one professor, Anton von Frisch , who was the head of anatomy classes at the academy from 1874–1906, actually carried out body dissections here. Anatomical drawing takes place in the Museum for the History of Medicine ( Josephinum ), in art museums, in the Federal Pathological-Anatomical Museum ( Narrenturm ), and in the Anatomical Institute on Währinger Strasse.

The anatomical hall was used by the Burgtheater in 2005 for the world premiere of Klaus Pohl's play Der Anatom with Ignaz Kirchner .