In 1972 he acquired the Otto Wagner Villa , which is currently used as the Ernst Fuchs Museum

Ernst Fuchs was born in Vienna in 1930 as the only child of Maximilian and Leopoldine Fuchs; on his father's side, his ancestors were of Jewish origin. When his grandfather Siegmund went to the USA and his father had to emigrate to Shanghai after the “Anschluss” of Austria in 1938/39, he was baptized a Roman Catholic in 1942 after anti-Semitic hostility. He himself chose his baptismal name: Ernst Peter Paul (after Peter Paul Rubens, the favorite painter of the then 12-year-old). Before that, in 1941, the young Ernst Fuchs became a pupil of the “Zum heiligen Jospeh” home, which took in half and valid Jews , where he spent eighteen months. From around 1942 Fuchs received his first instruction in drawing and painting from the painter and restorer Alois Schiemann , the brother of his godmother. Up to the age of fifteen he received lessons in sculpture and painting from Emmy Steinböck and Fritz Fröhlich at the St. Anna painting school in Vienna.

From 1946 to 1950 he studied at the Academy of Fine Arts in Vienna, first under Robin Andersen , then under Albert Paris Gütersloh . There was a first solo exhibition in Paris in 1949 , where he moved in 1950. This was followed by trips to America, Italy, Spain and England until 1956. In 1957 he stayed for a long time in the Dormition Monastery on Mount Zion ( Israel ) and worked with icon painting. In 1962 he returned to Vienna, where he received a professorship. Together with Wolfgang Hutter , Arik Brauer , Rudolf Hausner and Anton Lehmden, he is one of the founders of the Vienna School of Fantastic Realism . In 1972 he acquired the Otto Wagner Villa and began to realize his architectural ideas with the Nymphäum Omega fountain . The renovated building now serves as the "Ernst Fuchs Private Museum" and event location.

His initially surrealist , later mannerist works often show religious or mythical symbolism. According to the statements in his book “Architectura Caelestis”, many of his motifs are based on visionary experience. In Paris, influenced by Flemish painting, he produced numerous iconographic works. Three of these works later formed the altarpiece of the Rosary Church in Vienna-Hetzendorf.

Sculptures and some opera equipment ( Parsifal and Die Zauberflöte in Hamburg , Lohengrin in Munich ) date from the 1970s . He was to equip Mozart's Magic Flute again in 1996. Poetry and philosophical essays were also written in the 1970s.

Fuchs sang and played mystically inspired records, among other things. a. the albums "Von Jahwe" (chants about the tetragram JHWH ) and "Via Dolorosa", and worked again and again with musicians, where he also implemented his spiritual motifs as a singer. So z. B. the album "Aphrica" ​​with Klaus Schulze (1983), which he later withdrew due to a lack of artistic agreement. There was further cooperation a. with Chris Karrer from Amon Düül II in 1994 and the release of the double CD "Mystische Gesänge".

In the 1990s, Fuchs was increasingly active as an artistic designer of buildings ( parish church Thal near Graz , hotel complex in St. Veit an der Glan ), whereby his fantastic architecture is particularly noticeable through the use of lush ornamentation and strong colors.

Modern works by Fuchs based on biblical, mystical or astrological motifs have been shown at exhibitions in Austria, Germany, Italy, Japan, Russia and other countries since the 1980s.

Fuchs cultivated friendships with Salvador Dalí , Arno Breker , Mati Klarwein , Leonor Fini , Eva Nagy and many other artists. In 1975 Fuchs was the youngest of the friendship between artists that Salvador Dalí proclaimed: “We are the golden triangle of art: Breker-Dalí-Fuchs. You can turn us around as you want, we are always on top. "

In 1980 he drew the cover picture of the unsalable first edition of the magazine Natur .

In 1982 Fuchs designed a BMW 635 CSi . The BMW Art Car was called by him the “fire fox hunting rabbits”. In 1987, Ernst Fuchs portrayed Falco . The dialogue the two had while painting was recorded and broadcast on ORF on the occasion of Falco's 50th birthday. In 2005 the director and producer Jürgen Haase portrayed Ernst Fuchs in the documentary With the Eyes of the Soul. I wanted to be a street singer and emperor .

Ernst Fuchs, father of 16 children from seven (according to ORF: eight) relationships, died on November 9, 2015 in Vienna. He was buried in the Hütteldorfer Friedhof in the 14th district of Penzing in Vienna . 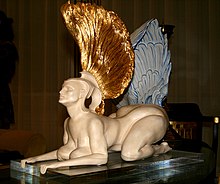 Interior view of the Church of St.Jakob in Thal, 1994

“What impresses about Fuchs is his high level of intelligence, his enormous literacy and his sparkling imagination, which pours out like a long-pent-up spring and carries everything along with enthusiasm; it never seems to dry up. In him you have a culture of three thousand years old, which he represents with his works. "