This article covers the University of Salzburg. For information on buildings, see Mozarteum (building) and Neues Mozarteum .

The University Mozarteum Salzburg , or Mozarteum University for short , is an art college in Salzburg for music, drama and related subjects. The previous institutions from which the university developed are also known as the Mozarteum .

The International Mozarteum Foundation is not part of the university, but an independent association which, among other things, organizes concerts and runs the Mozart museums in Salzburg.

On April 22nd, 1841 the “Dommusikverein und Mozarteum” was founded in Salzburg as a music school and for the collection of old Mozart documents. In 1880, the Mozarteum Public Music School, the forerunner of today's Art University, was founded following the earlier simple school forms . In 1914 the music school was recognized as a conservatory with public rights. In 1939 this conservatory was renamed the Reichshochschule Mozarteum . After 1945 it was called the Musikhochschule.

The Mozarteum University has the right to award doctorates ( Doctor of Philosophy ,  Ph.D. ). The related doctoral studies are located in the departments for musicology and music education (in Salzburg and Innsbruck). 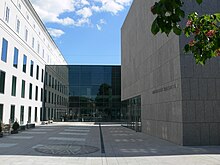 The main building of the university is the New Mozarteum at Mirabellplatz 1 in the right half of Salzburg's old town . The Mirabell Gardens are in the immediate vicinity. In 1978 the first New Mozarteum was created by adapting the Paris Lodron Primogeniture Palace and building a new building. The building was closed in 1998 on suspicion of carcinogenic pollutants. In 2004, extensive renovations began. When it reopened in September 2006, the New Mozarteum presented itself in a completely new form.

The Frohburg Castle houses next to a dormitory, the Orff Institute for the Orff-Schulwerk . In Innsbruck there is a branch (branch) with the department for music education, there since 2018 in the house of music .

Specialist departments in the field of music :

Specialist departments in the theater area :

Specialist department in the field of visual arts :

In the symphony orchestra of the Mozarteum University, students experience renowned conductors such as Nikolaus Harnoncourt , Michael Gielen , Peter Schneider , André Previn and Cornelius Meister in the past . Bruno Weil , Reinhard Goebel and Johannes Kalitzke have been leading the orchestra since October 2015 and are responsible for training the conducting students.

Today's university orchestra should not be confused with the Salzburg Mozarteum Orchestra , the symphony orchestra of the city and state of Salzburg. This was originally the orchestra of the students of the music school and later the Mozarteum Academy. In 1939, however, it became an independent orchestra of professional musicians.

In May 2017, Reiner Schuhenn was elected rector. In July 2017 it was announced that he would not take up his position. and resigned on July 10, 2017. In November 2017, the rector's contract for Elisabeth Gutjahr was originally supposed to be approved by the university council . After the resignation of three members of the university council, including Viktoria Kickinger , the university council consisted only of the chairman Karl Ludwig Vavrovsky and Nike Wagner , so the board no longer had a quorum.

In addition to the personalities listed below, the dignitaries also include 52 people who have been awarded a gold or silver medal of honor by the Mozarteum University (as of October 2019).

Honor roll of honorary members of the Mozarteum University

Directors, presidents and rectors of the Mozarteum