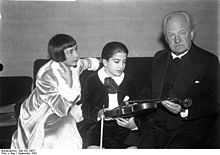 Ricci was born in 1918 as the son of Italian immigrants. He was a child prodigy . As a five year old he received lessons from Louis Persinger . He made his first public appearance in San Francisco when he was ten. A year later he made his debut with Felix Mendelssohn Bartholdy's Violin Concerto at New York's Carnegie Hall . In 1932 he undertook his first European tour. In particular, his Paganini interpretations quickly made Ricci famous. There was a long hiatus during World War II. In 1946 he resumed his concert career at Carnegie Hall. In 1949 he was one of the first American musicians to go on a concert tour to Germany.

From 1970 Ricci devoted himself increasingly to teaching, first at the University of Indiana, then at the Juilliard School in New York. From 1989 to 2002 he was visiting professor at the Mozarteum University in Salzburg . Later in his mature age he expressed himself with bitterness about his early child prodigies (“you should put all child prodigies and their parents against the wall and shoot them, then it would finally be over”).

His recordings, published by Decca ( 24 Caprices by Niccolò Paganini , Tzigane by Maurice Ravel , the two violin concertos by Sergei Prokofjew under the direction of Ernest Ansermet ) testify to a strong and rough personality as well as to an extraordinary technique, which is always about authenticity the sound as well as the sense endeavored.