Prokofiev and Prokofiev are redirects to this article. For further meanings see Prokofiev (disambiguation) . 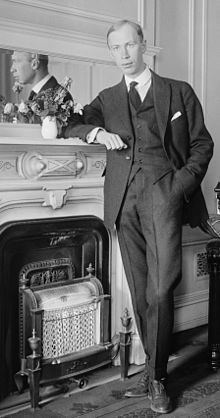 Prokofiev in New York, around 1918

. His musical fairy tale Peter and the Wolf is one of the most widely performed works of classical music in the world. 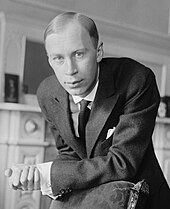 Sergei Prokofiev in New York, around 1918

Sergei Sergejewitsch Prokofjew, the son of an estate manager, showed musical talent at an early age. At the age of four he received his first piano lessons from his mother, and in 1896 he wrote his first compositions. After the composer Reinhold Glière had given him private lessons in the summers of 1902 and 1903 , he was introduced to Alexander Glasunow in early 1904 , who recommended that he begin studying at the Conservatory immediately. Prokofiev came to the St. Petersburg Conservatory as a 13-year-old student in April 1904 , where he studied composition , counterpoint , orchestration , piano and conducting with Nikolai Rimski-Korsakow and Anatoly Lyadow until 1914 . During his studies he went public with a few compositions and made a name for himself as a brilliant pianist. He stayed in Russia until 1918, traveling a lot and giving concerts. 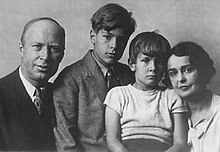 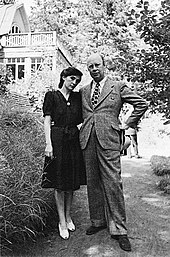 Mira Mendelson and Prokofiev in Moscow, 1946 Sergei Prokofiev with the composers Dmitri Shostakovich and Aram Chatschaturjan , 1940

Due to the difficult situation after the October Revolution , Prokofiev decided to leave Russia in 1918 and moved to the USA . There he did not manage to gain a foothold, however, so that he settled in France in April 1920 after a financial fiasco . In the following years he lived mostly in Paris, with the exception of 1922 and 1923, when he lived in Ettal . In 1923 he married Carolina Codina (1897-1989), a Spanish singer by the stage name Lina Llubera. His various concert tours as a conductor and especially as a pianist brought him back to the Soviet Union for the first time in 1927 . As a result, he was increasingly preoccupied with thoughts of returning. After a few years of commuting between Moscow and Paris, he finally settled in Moscow in 1936 . Two years later he made his last trip to a western country. In the Soviet Union, Prokofiev experienced an increase in productivity; many of his most important works were created there. At the World Music Days of the International Society for New Music (ISCM World Music Days) he is one of the most frequently performed composers: in 1923 the overture on a Hebrew theme was written in Salzburg , in Prague in 1924 (and later in Zurich in 1957) the violin concerto , and in 1928 in Siena performed the quintet for oboe, clarinet and string trio , in 1946 in London the ode to the end of the war op. 105 and in 1947 in Copenhagen / Lund the sonata No. 2 for violin and piano .

In 1941 he separated from his family and moved in with Mira Mendelson , whom he married in 1948. In 1945 he suffered a severe concussion in a fall, which led to lasting impairment of his health. On February 10, 1948, Prokofiev was accused of formalistic tendencies by the Central Committee (ZK) of the CPSU in the party resolution "About the Opera The Great Friendship " and called for greater popularity. Although his health deteriorated significantly in the last years of his life due to the consequences of the accident, Prokofiev remained tirelessly active until his death. From 1952 he received a state pension. 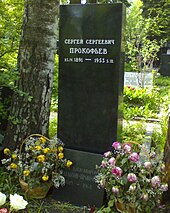 Grave of Sergei Prokofiev and his wife in the Novodevichy Cemetery

Prokofiev died on March 5, 1953, the same day as Stalin . Prokofiev's death therefore went almost completely unnoticed by the public in the shadow of the nationwide mourning for the dictator who died at the same time. There weren't even any flowers on his grave. His wife Mira died 15 years after him and was buried in the same grave in the Novodevichy Cemetery in Moscow.

Prokofiev himself explained his style as the interplay of four basic lines. The “classical line” is expressed on the one hand in his interest in historicizing elements such as old dances, on the other hand in his adherence to traditional forms. However, Prokofiev only composed his Classical Symphony in a truly neoclassical style , as he saw neoclassicism as a renunciation of an independent musical language. The “modern line”, on the other hand, includes his preference for daring harmonies , dissonances and unfamiliar combinations of chords. Sometimes it leads to the extreme limits of tonality . Third, Prokofiev mentions the “motor line”. Many of his works are characterized by piercing rhythms and wild motor skills. In contrast to this is the fourth "lyrical line". Time and again Prokofiev managed to create moments of bitter lyricism and quiet resignation and to compose expressive melodies. One can add to this list that humor and irony also play an important role in his work. Prokofiev's orchestral works also have a specific sound because they are often characterized by unusual orchestration , for example when violins and tuba play in unison .

Despite this continuity, three creative periods can be identified. The first is often referred to as the “Russian Period” as it includes works that were created before his temporary emigration. The works of this time are characterized by idiosyncratic rhythms, sharp dissonances, "sarcastic" humor and vital force. Although he is clearly breaking with the late Romantic tradition, his style is not completely detached from the musical past, especially since he does not break the tonality. Nevertheless, some of his works from this period caused a scandal (such as the Scythian Suite ). After a few more relaxed works during the transition (1st violin concerto, 3rd piano concerto), his tonal language became even more modern in the second period, the "period abroad" (from 1918). The dominance of the second “baseline” (see above) is clearly recognizable. In part, Prokofiev now disregards the tonality. Sound clusters and wild eruptions characterize many of his works at the time. Nevertheless, it never reached the modernity of some contemporaries. 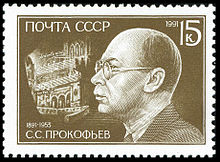 From the beginning of the 1930s, there was a clear change in style. This new style found its full expression after moving to the Soviet Union, which is why this period is known as the "Soviet period". Prokofiev was convinced that he had to write music that fulfilled a social mission. This can be seen in the simplification of the harmonics and the clearer contours of the melodies. By paying more attention to the traditions of Russian folk music, his music became more understandable and accessible. He also consolidated the tonality and emphasized a sophisticated polyphony . During the Second World War , his tonal language became even sharper, which promptly led to the above-mentioned criticism in the party resolution "About the Opera The Great Friendship ". Prokofiev then simplified his style even further. His last works are characterized by wide melodies, a lyrical mood, quiet resignation and an almost romantic tone.

Today Prokofiev is considered an important composer and classic of the modern age . His work as a composer of film music was also significant . Alexander Newski is considered to be a key work in the history of film music, which has been analyzed many times. Prokofiev's score influenced and shaped the modern film music of the classical-romantic style, which created clear style copies especially in the last decades of the 20th century, often even using direct quotations from works by Prokofiev ( John Williams , James Horner ).

Max Reger , whose sophisticated art of modulation impressed Prokofiev when he visited St. Petersburg in 1906 , as well as his student friend Nikolai Myaskovsky , who always gave him his opinion on his latest works in extensive correspondence, and Prokofiev's judgment, had a certain influence on Prokofiev's compositional technique attached great importance. Overall, however, no composer can be named to whom Prokofiev was particularly oriented; rather, he created his own, new style and influenced many composers of the next generation.

Prokofiev wrote down all of his scores in C, i. H. sounding. For the cor anglais he mostly used the alto clef , as it was already to be found in Johann Sebastian Bach. He noted high notes in the treble clef. He proceeded similarly with the bassoon, which usually only contains the bass clef . In the respective prefaces he pointed out that the voices had to be transposed (usually Bb clarinets and bass clarinets, F horns and Bb trumpets). However, he notated the piccolo and double bass in the classic octave. He also consistently - like Max Reger and partly Shostakovich - always put the trumpets over the horns. He consistently avoided the tenor clef with the cellos. For high notes he used the treble clef ( loco ). The so-called 'C-Score' did not catch on everywhere; but was adopted more and more often (among others by Arthur Honegger, later by Alban Berg and Arnold Schönberg. The latter - Berg and Schönberg - however, noted the double bass in its real pitch).

The term “unpublished” used in this list refers to the sheet music, not to the work itself.

Works for solo instrument and orchestra

Songs for voice and piano

From 1933 Prokofiev was an honorary professor at the Moscow Conservatory , and from 1947 he became a member of the Royal Swedish Academy of Music .

Reception in pop and film music