Allegory of Friendship by Johannes Voorhout , 1674; Johann Adam Reincken sitting at the harpsichord , on the left probably Buxtehude on the viola da gamba

Buxtehude (excerpt from the picture above) 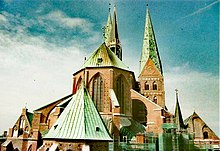 Dieterich Buxtehude (* around 1637 probably in Helsingborg ; † May 9, 1707 in Lübeck ) was a Danish - German organist and composer of the Baroque . His first name is also common in the form Dietrich .

Dieterich Buxtehude ( Danish Diderik Buxtehude ) was born around 1637 as the son of organist Johann Buxtehude (Hans Jenssen Buxtehude, 1602–1674) and Helle Jaspersdatters from Oldesloe in Holstein , probably in Helsingborg, Denmark at the time. Earlier assumptions that he was born in Bad Oldesloe cannot be ruled out, but are currently considered less likely in research. In 1641 his father was evidently the organist at St. Olai's Church in Helsingør . Dieterich Buxtehude probably graduated from Latin school there .

He worked as an organist at St. Mary's Church in Helsingborg from 1657 , and from 1660 to 1668 at St. Mary's Church (also German Church ) in Helsingør. On April 11, 1668 he succeeded Franz Tunder at St. Marien in Lübeck, whose second daughter, Anna Margaretha, he married on August 3 of the same year; There he also took over administrative and accounting tasks as "Werckmeister". He continued the series of Advent sacred concerts founded by his father-in-law and called evening music since 1673 , which made him known and famous as a composer and virtuoso organist. As early as 1669, the church leaders of the Marienkirche had side galleries added, which made it possible to make music from there together with the large organ.

In 1705 Johann Sebastian Bach walked the more than 465 kilometers from Arnstadt (Thuringia) to Lübeck to hear his musical role model Buxtehude, and presumably took lessons from him. The stay in Lübeck meant so much to Bach that he arbitrarily extended this “educational leave” by 12 weeks and was therefore questioned and reprimanded by his superiors in Arnstadt. However, Bach does not seem to have been interested in the successor to the aging organist, in contrast to Georg Friedrich Handel or Johann Mattheson , who considered this position. Buxtehude's successor was finally Johann Christian Schieferdecker , who married his eldest daughter Anna Margreta.

Dieterich Buxtehude is the most famous representative of the North German Organ School . His most famous student was Nicolaus Bruhns .

Buxtehude died in 1707 and was buried in the Marienkirche in Lübeck near the so-called "Dance of Death Organ". In bombing in 1942 , the tomb was destroyed. On the 250th anniversary of his death in 1957, a new memorial plaque was placed on his grave.

There is no known portrait of Buxtehude that clearly identifies him. Since the rediscovery of the domestic music scene by the Dutch painter Johannes Voorhout in 1674, there have been various attempts to identify Buxtehude in it. In 2008 a portrait of Johann Theile was discovered in the Lübeck city ​​library , which excludes him as the viol player. That makes it all the more likely that Buxtehude is the gambist in the music scene . He picks up the notes D and B on his instrument, Buxtehude's initials .

As a composer, Buxtehude created an extensive work. Trio sonatas and piano works predominate among his secular works. He has created numerous organ works of sacred music, some of which are not liturgical in character, but rather concertante, others are suitable as preludes or aftermaths for church services or for concert performances.

Buxtehude's vocal oeuvre is more extensive than the organ. The oratorio-like "evening music" with which the history of religious and public concerts in Germany begins, and cantatas , which according to the custom of the time are more suitable for worship, determine this part of his work. The evening music existed in Lübeck until 1810 and was re-established in 1926.

In his cantatas, Buxtehude uses three different types of text, each of which corresponds to composition techniques tailored to the type of text. The first, the Bible texts, are mostly taken from the Book of Psalms and are set to music in the form of concertos with an alternation of solos and tutti. The compositional technique takes the structure of the texts into account and is often provided with an introductory sonata. From a liturgical point of view, the second type of text fulfills the function of the answer song with which the believers respond to the previously heard word of God. Here, in Buxtehude's cantatas, there are German chorales, which are set to music using concert technology, as monophonic or polyphonic homophonic singing. The third type of text is made up of commentaries on the Bible, poems with multiple stanzas, most of which are composed in the form of arias. This third form corresponds to the inner appropriation of the Word of God by the believing soul, which is important in the movement of Pietism . 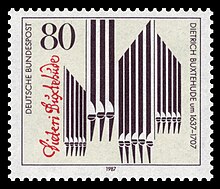