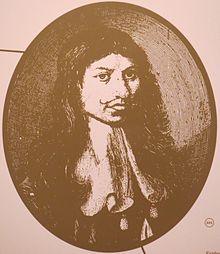 Opera am Gänsemarkt, detail from Paul Heinecken's view of the city in 1726

After studying law in Leipzig and Halle , he took composition lessons in Weißenfels . His teacher here was Heinrich Schütz ; Theile is considered to be one of his last students. His St. Matthew Passion was written in Lübeck in 1673. In 2008 a portrait of Theile was discovered in the Lübeck city library .

He was employed as an organist in Stettin and Lübeck . He also had an outstanding reputation as a music educator and teacher. Theile himself, as Johann Mattheson reports , regarded Dieterich Buxtehude (who, however, was nine years older and died well before Theile) as his most important pupil.

In the years 1673 to 1678 he held the position of court conductor to Duke Christian Albrecht of Schleswig-Holstein-Gottorf . In 1677 operas were performed in the refectory of Hamburg Cathedral . One year later, the opera on Gänsemarkt in Hamburg - the first bourgeois opera house in Germany - opened with his Singspiel Adam and Eva .

Between 1685 and 1689 he held the position of Kapellmeister in Wolfenbüttel ; here he succeeded Johann Rosenmüller . Further stations of his work were at the opera in Naumburg and with Christian I (Sachsen-Merseburg) . After Berlin - he also worked as a music teacher here - he returned to his hometown in 1694 as musical advisor to the Duke of Zeitz , Moritz Wilhelm (Sachsen-Zeitz) .