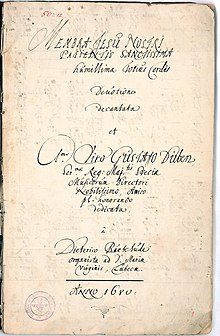 Title page of the tablature with a dedication to Düben

Buxtehude wrote the work in 1680. It has come down to us in an autograph tablature manuscript that has been preserved in the collection of the Stockholm court music director and organist Gustav Düben . He was friends with Buxtehude and also the dedicatee of the work.

The text of the work combines Bible verses with verses from a medieval devotional poem, which was known in Buxtehude's time under the name Domini Bernhardi Oratio Rhythmica ( Mr. Bernhard's rhyming prayer ) and was considered the work of St. Bernard of Clairvaux , but is now ascribed to Arnulf von Löwen . This seal consists of seven parts dedicated to one part of the crucified Christ's body in ascending order: feet, knees, hands, side, chest, heart, face. Each part has five ten-line stanzas (the part dedicated to the heart seven), each of which is again divided into two five-line half-stanzas. The seventh part, Salve caput cruentatum , had already served Paul Gerhardt as a model for the hymn O Head full of blood and wounds , which became the passion chorale par excellence and was also used by Johann Sebastian Bach in the St. Matthew Passion . Paul Gerhardt's songs Be greeted a thousand times and O Heart of the King of the World are also transmissions of the first and sixth part of this cycle. A Latin-German edition by Joseph Wilhelmi , which appeared for the first time in 1633, is considered a possible text template for Buxtehude .

From the ten or fourteen semi-stanzas of each part of the Rhythmica Oratio , the compiler (Buxtehude himself is suspected) selected three for each part of the body. As a framework for the three half-stanzas, he selected appropriate Bible passages that related to the respective body part.

The basic structure is varied in the frame cantatas 1 and 7 by a stronger use of the choir, which gives them special weight, while the cantatas 5 and 6, which are dedicated to the chest and heart, are smaller than the others in order to emphasize the inwardness of these parts . In detail, the cantatas deviate from the basic scheme as follows:

The performance materials that Gustav Düben made from the original tablature show that at least he did not perform the work in a cyclical context, but at different times. However, this cannot be used to infer Buxtehude's intentions.

Gustav Düben added, possibly in accordance with the performance practice of the time, a middle string part entitled “Complemento” to the original set of parts, which is nowadays usually not taken into account for performances.

The Membra Jesu nostri are prime examples of the high baroque “Concerto Aria Cantata”. Her formal unity as well as her strong expressiveness should be emphasized. Numerous musicians in the field of historical performance practice have performed and recorded this work, so that it can now be counted among the better-known creations of church music .