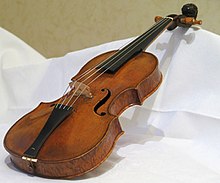 The baroque violin (also sometimes called the old scale violin or short-necked violin ) corresponds to the most common construction and sound aesthetics that were common in the first two centuries after the first appearance of the violin (around 1580–1800). Since the end of the 1950s, the instrument has been used more and more to differentiate it from the modern violin (see historical performance practice ). The term baroque violin is more recent and actually incorrect from an art-historical point of view, because the violin in its basic external form and function was created a few decades before the beginning of the baroque period.

The so-called baroque violins that exist today can be divided into three groups:

Differences to the modern violin

Early baroque violin in front of the cello da Spalla 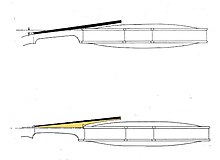 The differences between the baroque violin and the modern violin and viola, as well as other instruments in the violin family, are: 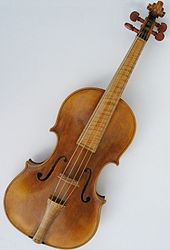 Replica of a baroque violin

In contrast to the modern violin, the sound of the baroque violin was less standardized. In some cases there were considerable regional differences in volume. The French writer François Raguenet reported that the violins in Italy sound twice as loud as in France due to the thicker strings . In his biography, Georg Philipp Telemann reports on music in taverns where a high-pitched violin "could scream over half a dozen others". In his 1971 standard work on the history of violin playing, the American musicologist David D. Boyden expresses the opinion that the tone and sound quality of the old violins cannot be described in words, but speculates that the tone was smaller, less brilliant, sweeter and less metallic . In 1973 Eduard Melkus describes the sound of the baroque violin as "soft", "transparent" and "silvery", but the sustaining and majestic sound of the modern violin is missing. Nikolaus Harnoncourt characterizes the tone of the baroque violin compared to the modern instrument as "quiet but sweetly sharp".

In contrast to the modern instrument, the baroque violin is mostly played without a shoulder rest or chin rest. The instrument is placed directly on the collarbone or shoulder. In rarer cases it is held above the breast, as was customary up to the beginning of the 18th century and can be seen in old pictures. These postures require a fundamentally different technique of the left hand when changing position.

The different construction, the gut strings, the historically correct bow and the historical way of playing lead to a very characteristic sound that differs greatly from that of the modern violin. Both the mastery of this sound and the corresponding historical performance practice and playing posture require an adapted playing technique, which is taught today at most music colleges and in master classes.

Georg Muffat wrote in 1698 about the possible different bow positions :

"Most Germans play in attacking the bow by pressing their hair down with their thumbs as required, and in this they are differentiated from the Welschen, as which leave the hair untouched."

One of the most important foundations for the original way of playing are music manuscripts from the 17th and 18th centuries as well as historical teaching works. From the German-speaking area, Leopold Mozart's “ Attempt at a Thorough Violin School ” (1756) should be mentioned. Addressed to young beginners, which in 1695 is Augsburg resulting textbook Daniel Merck's (1650-1713) " Compendium musicae instrumentalis Celicae: Kurtzer term which forms the instrumental music on the violin, Pratschen, viola da gamba and bass seye to learn thoroughly and easily ".

“The same bass = tenor = and discant violin (which violino, or Violetta picciola, also called Rebecchino is called) are with 4th strings ... and are all tuned by fifths. And therefore everyone knows / is aware of it (except for this / that when they are covered with brass = and Stälenen strings / give a quiet and almost lovely resonance more than the others /) "

Johann Joachim Quantz's “ attempt at an instruction to play the flute traversate ” is primarily intended for the transverse flute, but also contains numerous references to the baroque style of playing the string instruments.

John Lenton's “The Gentleman's Diversion, or the Violin Explained” was published in London in 1698, and in 1751 Francesco Geminiani's “L'Arte del Violino” , which had an important influence on the violin technique of the time.

Marin Mersenne's work “Harmonie Universelle” was published in France in 1636 , followed by Michel Corrette's “L'École d'Orphée” in Paris around 1738 , in which he gave important instructions on the contemporary interpretation of the Italian and French styles. The work “L'Art de se perfectionner sur le violon” is to be regarded as a continuation. Around 1740 Guillaume-Pierre Dupont's (1718–1778) “Principes de violon par demandes et par reponce” (“Questions and answers on the principles of the violin”) appears. Giuseppe Tartini published “Traité des agréments de la musique” in Paris in 1771 .

More and more "modern" violinists, depending on their repertoire, are using the baroque violin in addition to the modern violin, e.g. B. Christian Tetzlaff , Thomas Zehetmair or Maxim Wengerow . The latter repeatedly plays Mozart's violin concertos or the Beethoven concert on the baroque violin.

Other well-known soloists discover historical performance practice and use the playing technique of the baroque violinists on conventional instruments, such as Viktoria Mullova with the Milanese baroque ensemble Il Giardino Armonico .

You too: Some well-known soloists and educators in the list of violinists .