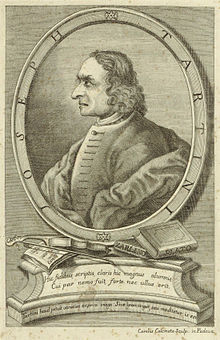 Monument in his birthplace Piran

Giuseppe Tartini was the son of the director of the salt mills in Pirano, who had planned a spiritual career for his son. Tartini first studied humanities , rhetoric and music in Capodistria . In 1709 he was enrolled as a law student at the University of Padua , but spent most of his time teaching fencing . He openly opposed the career aspirations of his devout parents and on July 29, 1710 married Elisabetha Premazore, two years his senior, who came from lower social circles. This brought him into trouble with the family and the local clergy and led him to flee to the monastery of S. Francesco in Assisi , where he was protected by Abbot Padre G. P. Torre for three years. Here he devoted himself to playing the violin autodidactically and most likely received composition lessons from Padre Bohuslav Matěj Černohorský . From 1714 he worked as an orchestral musician in Assisi and at the Ancona theater. In 1721 he was entrusted with the management of the orchestra of the Basilica of St. Anthony (Padua) . From this position he was able to undertake several trips, he also spent several years in Prague , where he was crowned Charles VI. experienced.

Back in Padua he founded his music school, which attracted musicians from all over Europe. a. Gaetano Pugnani , Pasquale Bini , Johann Gottlieb Graun , Joseph Touchemoulin , Maddalena Sirmen , Pieter Hellendaal , André-Noël Pagin or Carminato . After the death of his wife, he shared an apartment with the cellist Antonio Vandini , whom he knew from Prague and for whom he composed his cello concertos. In Padua Pietro Nardini became his favorite student. Tartini wrote many works on music theory, including one on the art of ornamentation , which Leopold Mozart may have used as a model for his violin school . The theoretical works published in the following period, some of which were based on incorrect calculations, but also on personal experience, were heavily criticized and doubted by the competition at the time. Seriously offended by this controversy, Tartini died.

Tartini's style was subject to significant changes over time and was initially based on models such as Corelli and Vivaldi . The game was richly decorated in line with the baroque tradition, but later achieved a virtuoso pre-classical style. Tartini was famous for its cantable style and for its bowing . He was one of the first violinists to attach particular importance to the bow.

The so-called Tartini tones are named after him . These are difference tones that result from the superposition of two individual tones of different frequencies . They are amplified by the non-linearity of the hair cells in the cochlea and by other non-linearities on the musical instrument, making them easier to hear. This applies above all to tones with a greater volume , in which these non-linearities are usually more pronounced. The perception of the difference tones is also used for medical diagnosis of the hearing.

Legend of the Devil's Trill Sonata

The following statement, which is said to have come from Tartini, is in the realm of a romanticizing legend.

“One night I dreamed that I had made a pact with the devil for my soul. Everything went according to my command, my new servant recognized all my wishes in advance. Then the idea occurred to me to let him have my fiddle and see what he would do with it. How great was my astonishment when I heard him play a sonata of such exquisite beauty with perfect skill that it exceeded my wildest expectations. I was delighted, carried away, and bewitched; I caught my breath and woke up. Then I picked up my violin and tried to understand the sounds. But in vain. The piece that I then wrote may be the best that I have ever composed, but it lags far behind what I heard in my dreams. "