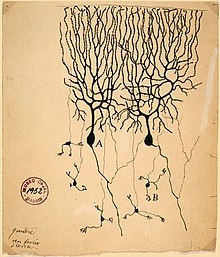 Two Purkinje cells ( A ) and five granule cells ( B ) from the cerebellum of a pigeon (drawing by Santiago Ramón y Cajal , 1899)

Scheme of interconnections in the cerebellum . The cell bodies of Purkinje cells are located in the middle layer of the cerebellar cortex named after them (colored gray).

Purkinje cells or Purkyně cells are the characteristic large multipolar neurons with strong verästeltem dendritic tree in the cortex of the cerebellum ( cortex cerebelli ) whose axons the efferents represent the cerebellar cortex.

Analogous to the cerebrum a is in the cerebellum also bark ( cortex ) is formed with only three-layered structure. The cell bodies (somata) of Purkinje cells are located in the middle layer of the cerebellar cortex, the stratum purkinjense. These nerve cells, arranged in a single layer at a distance of 50–100 µm, are the largest cells in the cerebellum with a perikaryon of around 50–70 µm. They are characterized by an extremely branched dendrite tree , which is aligned almost flat like a trellis in the outer layer of the cerebellar cortex, the stratum molecularulare . The human cerebellum has around 15 million Purkinje cells, each with one axon.

These neurons are named after their discoverer, the Bohemian physiologist Jan Evangelista Purkyně (1787–1869), who first described them in 1837, as did the cortical layering of the cerebellum.

Synaptic interconnection of the Purkinje cells 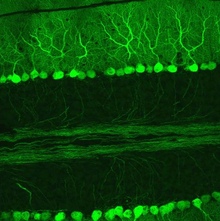 Purkinje cells in a sagittal cerebellar section. They express the GFP derivative EGFP under the control of the Purkinje cell-specific promoter L7 and therefore fluoresce when excited with blue light.

The cerebellum receives its afferents from the periphery (including muscle spindles), the brain stem and the cerebral cortex; which ultimately converge on the Purkinje cells.

The Purkinje cells receive two exciting inputs, namely from the climbing fiber system and the moss fiber parallel fiber system ; these are excitatory and glutamatergic.

In contrast to the parallel fiber input - which requires a considerable spatial summation to trigger an action potential (AK) - the probability of transmitter release at the presynaptic endings when an AK arrives is very high (even a single climbing fiber action potential excites the Purkinje cell above threshold).

The moss fibers (approx. 50 million) are axons of neurons in brain stem nuclei and spinal cord. They convey information from the cerebral cortex and activate the granule cells, the axons of which are the parallel fibers, which in turn excite the Purkinje cells. A parallel fiber has only one synapse per Purkinje cell.

The Purkinje cell is innervated in the molecular layer essentially by two types of interneuron : the basket cells and the stellate cells.

In the proximal part of the dendrite tree of the Purkinje cells these are especially the basket cells , more distally mainly the stellate cells . The Golgi cells (multipolar ganglion cells of the Golgi type, which appear as large granule cells of the cerebellar cortex ) are another interneuron type in the granule cell layer . The synapses of these three interneurons are GABAerg , that is, they use GABA as a transmitter .

It was recently discovered that, contrary to previous assumptions, the Lugaro cells also have synapses with the Purkinje cell in the granular layer. However, these are only active under certain conditions. For example, they need the presence of the neurotransmitter serotonin .

Exit of the Purkinje cell

and beyond that in the nucleus vestibularis laleralis.

The dendritic tree of the Purkinje cells is, like that of some other central neurons, covered with thorny processes - in English spines - and this is about five times denser than in pyramidal cells . The postsynaptic membrane region of an excitatory synapse is located on a thorny process on the dendrites of Purkinje cells . The GABAergic inhibitory synapses do not terminate in thorns.

Purkinje cells are the only neurons in the CNS to express the GluRδ2 receptor . The amino acid sequence of this receptor suggests that it is an ionotropic glutamate receptor. Nevertheless, neither a direct binding of glutamate to this subunit nor its incorporation into a known glutamate receptor has been demonstrated. GluRδ2 receptors are mainly located on the parallel fiber synapses of the Purkinje cells. In the absence of the receptor, synaptic plasticity is disrupted at the cellular level and motor control and motor learning are disrupted at the behavioral level. Many other postsynaptic proteins interact with the GluRδ2 subunit. The GluRδ2 receptor thus plays a key role in the function of the cerebellum, even if its function and its mechanism of action are still unclear.

Metabotropic glutamate receptors, predominantly the subtype mGluR1, are localized perisynaptically ( i.e. at the edge, not in the center of the synapse) in both parallel fiber synapses and climbing fiber synapses in Purkinje cells .

As in all neurons, voltage-activated sodium channels in Purkinje cells are responsible for the creation and transmission of action potentials. They are primarily expressed in the soma and axon of the Purkinje cell. In the dendrite tree, their density decreases rapidly with increasing distance from the soma. For this reason, in contrast to other types of neurons such as pyramidal cells in the hippocampus, the action potential in Purkinje cells does not penetrate the dendrite tree strongly. The sodium channels Na v 1.1, Na v 1.2 and Na v 1.6 are mainly expressed in the Purkinje cells of mammals .

In the dendrite tree and soma of the Purkinje cells there are voltage-dependent calcium channels , most of which belong to the P / Q type . With strong depolarization (such as an action potential or synaptic activity of climbing and / or parallel fibers), these cause calcium ions to flow into the cell.

The membrane of the endoplasmic reticulum (ER) of Purkinje cells contains ligand-activated calcium channels, both IP3 receptors and ryanodine receptors . When activated, both release calcium ions from the ER calcium store into the cytosol , where they increase the concentration of so-called free calcium ions. Of the various IP 3 receptors, subtype 1 (IP 3 R1) is primarily expressed in Purkinje cells , and in fact in at least 10 times the amount compared to other cell types.

Spontaneous activity of the Purkinje cells

Purkinje cells are characterized by a high level of spontaneous activity. This means that they generate action potentials regardless of whether they are excited by climbing or parallel fibers. They fire at a frequency of approx. 50–150 Hz. Calcium-activated potassium channels , the so-called BK channels , serve as rhythm generators .