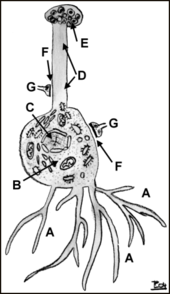 Perikaryon (from ancient Greek περί peri 'around' and κάρυον karyon 'core'; plural: perikarya or perikaryen ) is the neuroanatomical name of the area of ​​its cell body surrounding the nucleus of a nerve cell (also called soma ).

The term primarily serves to distinguish it from the cell processes of a neuron, neurite or axon and dendrites . The shape and size of the perikarya differ considerably - largely depending on the number and extent of the cell runners - with diameters of around 5–100 µm, in invertebrates even up to 1 mm.

The perikaryon surrounds the nucleus of the nerve cell as a cytoplasmic part and is usually spherical, often also spindle-shaped or pyramidal. It contains most of the organelles and cell components that are essential for metabolic processes and regeneration : mitochondria for energy production, endoplasmic reticulum for protein synthesis , the Golgi apparatus , lysosomes as well as neurotubules ( microtubules ) and neurofibrils . The perikaryon is thus the “metabolic center” of a neuron.

Processes emerge from the cell body: the neurite and possibly several dendrites. The neurite, in the course as axon enveloped by glial cells , originates at the so-called axon hillock of the perikaryon, where at suprathreshold energizing a cell action potential is initiated. Excitations from other nerve cells can be transmitted to the nerve cell body via synapses - dendritic ones on the peripheral cell processes and somatic ones on the central cell body - and promote or inhibit the development of action potentials .

Local accumulations of cell bodies within the central nervous system (CNS) are neuroanatomically as a core region or core ( nucleus ) of the gray matter respectively. In the so-called white matter , on the other hand, it is mainly the long processes of nerve cells that run; Their bundled lines are also referred to as the pathway ( tract ) in the CNS and as the nerve ( nerve ) in the PNS .

The term "core area" does not refer to the nucleus or nucleus of a single nerve cell, in whose caryoplasm a nuclear body or nucleolus is located. Cell nucleus and perikaryon are also referred to in cell biology as a soma , which often only refers to the trunk of the cell body without any appendages. This term is preferred for neurophysiological considerations if anatomical positional relationships are not to be specified for a neuron.