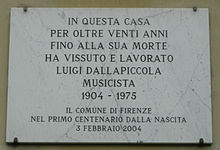 Plaque on Dallapiccola's house in Florence

Dallapiccola was born the son of a school principal, began playing the piano at the age of eight and began composing from the age of eleven. When the First World War broke out, his studies were interrupted in 1917. His family was deported to Graz for almost two years and interned there. During this time he came into contact with German and Austrian opera - especially that of Richard Wagner and Wolfgang Amadeus Mozart . His family returned to Istria in 1919, where he was able to continue his education, and he also traveled to Trieste for private piano and harmony lessons. From 1922 to 1924 Dallapiccola studied piano with Ernesto Consolo in Florence. The encounter with Arnold Schönberg's Pierrot lunnaire solidified his decision to embark on a career as a composer and so he studied composition with Vito Frazzi at the Luigi Cherubini Conservatory in Florence until the early 1930s . From 1934 to 1967 he worked there himself as a teacher for piano and composition. This activity allowed him to travel and get to know a wide variety of works and composers, including Alban Berg and Anton Webern . Luigi Dallapiccola was active well into old age and traveled through Europe, England, the USA and Argentina. He was a valued teacher and lecturer and has taught at various institutions including the Berkshire Music Center in Tanglewood and Queens College.

His operas are considered modern classics today . One of his achievements is the introduction of the twelve-tone technique in Italy . However, this twelve-tone technique does not follow the “traditional” rules according to Arnold Schönberg , but rather is to be understood in terms of motifs. His compositional style is also characterized by a counterpoint that is based on Johann Sebastian Bach and Italian models ( Tartiniana ). Dallapiccola was best known for the world premiere of the orchestral work with soprano solo Partita (1930–1932). In his entire oeuvre , which comprises about four dozen works, vocal music occupies the most important position.

Although he was initially still impressed by Gabriele D'Annunzio's fantasies of great power - he set his “Kvarner Lied” (Italian La Canzone del Quarnaro ) to music in 1930 , in which Italy's claim to Istria, Dalmatia and the Adriatic islands is sung about in later years he took a clearer position on political and social issues in his works. Examples of this are the anti-fascist Canti di prigionia (1938–1941, songs of imprisonment ) and the Canti di liberazione (1951–1955, songs of liberation ).

The main focus of Dallapiccola's work, however, was the genre of opera, which he cultivated in a very Italian sense by not saying goodbye to the custom of bel canto , but using it in the light of twelve-tone technique and counterpoint in a way that is more lyrical than that of Alban Berg and Schönberg. Dallapiccola was the director of the “Florentine School of Dodecaphony ”, which helped determine the cultural life of Florence at the time , to which the guitarist and composer Reginald Smith Brindle belonged.

In 1950, Dallapiccola was made an honorary member of the International Society for Contemporary Music ISCM . In 1964 he was awarded the Ludwig Spohr Prize of the City of Braunschweig and in 1973 an Antonio Feltrinelli Prize . Since 1964 he was an honorary foreign member of the American Academy of Arts and Letters .