The book title is Hebrew שִׁיר הַשִּׁירִים Shir ha-Shirim . It literally means “The Song of Songs” and expresses the Hebrew superlative (meaning: “The most beautiful of all songs”). This largely corresponds to the title in the Greek Septuagint Ἄσμα Ἀσμάτων (ásma asmáton) and in the Latin Vulgate Canticum Canticorum .

The name “Song of Songs” goes back to the translation of the Bible by Martin Luther , who called the book “The Song of Solomon Salomonis”.

Slightly different spellings are used in German today. In the specialist literature and in religious Christian usage, the spelling “Song of Songs” predominates (more rarely “Song of Songs”). The Duden , on the other hand, recommends the form “Hohelied” without the inflection of the adjective (e.g. “des Hoheliedes”). In technical language, the term is mostly inflected in both parts of the word (ie "des Hohenlied"). In accordance with its naming convention for biblical names, Wikipedia follows the technical language.

There is now a consensus regarding the finding that the Song of Songs is a collection of originally independent love songs. It is controversial whether the songs were arranged according to an overarching concept. Basically three views can be distinguished: One interprets the Song of Songs as a progressive story (e.g. André Robert, 1963), a second reads it as a drama (e.g. Origenes, 244; Christoph Uehlinger, 2001), while a third interprets it as a rather loose compilation considered (inter alia Keel, 1992; Zakovitch, 2004). The interpretation of the Song of Songs as a loose combination can be seen as common sense , whereby the use of some refrain-like elements (e.g. evocation of the daughters of Jerusalem : 2.7; 3.5; 8.4; togetherness formula: 2.16, 6, 3; 7.11) and recurring motifs (e.g. the garden motif: 4.12.15.16; 5.1; 6.2.11; 8.13) give the collection a certain structural connection.

In the Song of Songs, a man, a woman and a kind of choir appear alternately as speakers. Traditionally, the man was often identified with Solomon (the attribution in the poem is unclear; where the name “Solomon” is used, this does not have to be the male speaker); sometimes a love drama between three people (a woman, a simple shepherd and King Solomon as his rival) was accepted. The woman's name was mostly given with Sulamith due to the mention in Chapter 7 ( Hld 7,1  EU ) . It should be noted, however, that in keeping with the collection character of the Song of Songs, different female and male figures originally spoke and acted here.

The Song of Songs has been divided into eight chapters since the Middle Ages .

The time of origin of the Hohenlied is highly controversial. The mention of Solomon at the beginning of the Song of Songs is generally not interpreted as sufficient evidence of Solomon's authorship. Nevertheless, some theologians do not rule out a (partial) authorship of Solomon or at least assign the origin of the Song of Songs to the Solomonic context. One argument for the possible old age of poetry is its proximity to Egyptian poetry of the New Kingdom .

On the other hand, aramaic language forms, a Persian loan word ( pardes ; Park in Hld 4,13) as well as various names for exotic spices and fragrances are cited, which indicate that the Song of Songs did not take its final form until after 500 BC. Has received.

Parallels to Greek poetry and various Greek customs (e.g. royal litter in Hld 3,9-10; bridegroom wreath in Hld 3,11) in the Song of Songs point to the Hellenistic period, i. H. the 3rd century BC Chr, out.

The surviving text witnesses from the Qumran caves also show variants in the text collection, which indicates that this was in the 2nd century BC. Was not yet finalized.

The philosopher of religion Carl Gebhardt dealt with dating and interpretation in translations and commentaries in 1930. Regardless of older, assumed original ideas and parts of the text, he dates the work to the time of Hellenism (300 BC). He represented the motif correspondences with the Amoebean poetry Theocrites , after the humanists of the 17th and 18th centuries had already noticed that parallels to Greek poetry can be found here. Then also Hugo Grotius and Johann Theophil Lessing, a brother of Gotthold Ephraim Lessing, already pointed out.

A cultic-mythological theory emphasizes the correspondence with Sumerian and Akkadian texts about the holy marriage , in particular the connection between Dumuzi or Tammuz and the goddess Inanna / Ištar . Against this theory, it is argued that the Old Testament otherwise clearly opposes Canaanite fertility cults. 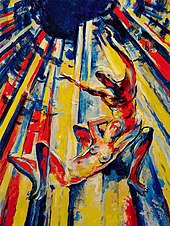 The Song of Songs contains longing to rapturous statements about human love and eroticism. Husbands and wives take turns praising their love for one another, their longing for the other and praising the beauty of the loved one. A progressive action can hardly be discerned, rather it is about the changeful interplay of desire and fulfillment, of separation and union.

It is noticeable that the female speaker speaks much more often than her male counterpart. Structurally, too, her utterances are exposed, since the Song of Songs begins with her song of longing (Hld 1, 2–4) and ends with the invitation to her lover to hurry to her (Hld 8:14). In terms of content, the speaker also presents herself as noticeably active, strong and powerful. The prominent position of women in the Song of Songs was established by Ginsberg as early as 1857 and described by the feminist theologian Brenner as open " gynocentrism ".

Characteristic for the Song of Songs is an ambiguous, extremely pictorial language. The beauty of the beloved (e.g. eyes like doves, Hld 4,1  EU ) or the act of love (e.g. going into the garden, 4,12-5,1) are sung about in metaphors, which in anchored in the language and culture of Israel, Egypt and the Middle East. 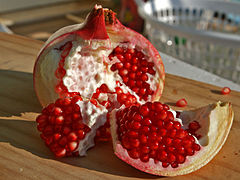 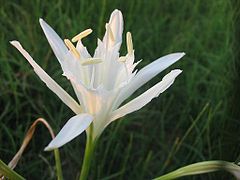 "I am a flower in Sharon and a lily in the valley." 2.1 - The dune-funnel narcissus could be the flower mentioned in the Song of Solomon 2.1, which is known under names like " Rose of Sharon " in poetry and Music has been mentioned frequently with reference to the Song of Songs.

In ancient times, the biblical King Solomon was accepted as the author of the Song of Songs. This is probably due to the fact that Solomon himself is mentioned in the text (1.5; 3.7ff .; 8.11f.) And Solomon was considered to be the author of 1005 poems ( 1 Kings 5.12  EU ). This attribution of the author was also adopted from the Middle Ages and has followers to this day.

The Talmud provides the oldest message . In the Mishnah tract on Jadayim (III-5) it is reported that the Jamnia Synod (c. 90 CE) had to decide whether the Song of Songs should be included in the canon of the scriptures. The Hillel's school recognized the claim to canonicality despite Shammai's contradiction . This interpretation was particularly resolutely pursued within Judaism by Rabbi Akiba in the 2nd century. He interpreted the song as a representation of the relationship between God and the people of Israel. As a result, he strongly condemned a secular, erotic interpretation and a corresponding singing of the song. Akiba's interpretation was dominant for centuries. The Targum for the Song of Songs between 700 and 900 AD and later medieval rabbis such as Saadia Gaon , Schlomo ben Jizchak or Abraham ibn Esra interpreted it in a similar way .

The line of interpretation was continued by Christianity . The bridegroom was mostly Christ and the bride the church (as with Hippolytus ), the individual soul ( Origen ) or the Virgin Mary ( Ambrosius of Milan ).

Since Sulamith was also often seen as a representation of Mary in the Christian Middle Ages, the Song of Songs played a prominent role in the Marian piety of Christian mystics . In the fine arts it is often the Hortus conclusus that alludes to the Song of Songs as a motif and is one of the Marian symbols . The motif refers to the text passage A closed garden is my sister bride, a closed garden, a sealed spring ( Hld 4,12  EU ).

This interpretation has been increasingly on the defensive in the course of the Enlightenment since the 18th century. From the beginning of the 18th to the 19th century the “Dramatic Hypothesis” can be traced, which for the first time focused on the change of scene and speaker between female and male voices, dialogues between both and choral we-pieces. However, the exact delimitation of the individual elements always remained controversial. While Georg Wachter saw the Song of Songs in 1722 as a scenic singspiel in five acts, Heinrich Ewald interpreted it as a shepherd's play in 1826.

The Jewish religious philosopher Franz Rosenzweig defended the Song of Solomon against traditional religious interpretations and against a purely secular understanding, as it had prevailed since Herder and Goethe : “Not although, but because the Song of Songs is' real ', that is to say: a' was a worldly 'love song, precisely because of that it was a real' spiritual 'song of God's love for man. Man loves because and how God loves. His human soul is the soul awakened and loved by God. "

While the Song of Songs was often commented on and used as a sermon material in the Middle Ages - Bernhard von Clairvaux is an outstanding example of this - it hardly plays a role in today's piety practice in the major churches.