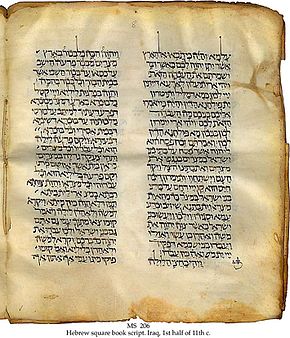 Bilingual Bible, 11th century.
The text ( reading section Bo ) begins with the last word of Shemot 12:24 in the Aramaic translation according to the Targum Onkelos , then it continues with 12: 25–31 in Hebrew, with the Hebrew verses being followed by their Aramaic translation. The translation of verse 31 is not fully included on the page.

A targum ( Hebrew תרגום 'Translation' , 'explanation'; Plural Targumim , German also Targume ; abbreviated Tg ) is an ancient translation of Hebrew or ancient Greek Bible manuscripts into Aramaic . There are official Targumim, especially the Babylonian ones, and unofficial Targumim, especially the Palestinian ones. In addition to the “simple” ( peschat ) literal meaning, a targum can also contain passages that are interpreted like a midrash and expanded and interpreted like a commentary. Targumim are between 200 BC. and 800 AD.

After the Babylonian exile (539 BC), Aramaic, the main language in the Persian Empire , replaced Hebrew as the everyday language in Israel . The oldest known Aramaic Bible manuscripts were found in 1956 among the Qumran Scrolls . They originated between 200 and 150 BC. And translate parts of the Hebrew 3rd Book of Moses ( 4Q156 ) and the Book of Job (4Q157, 11Q10).

The Aramaic Job texts differ only slightly in a few places from the previously known Masoretic manuscripts , which were around 1000 years younger . They are simpler, therefore easy to understand, and show a tendency to reduce mythical motifs and interpret them rationally.

After the Jewish Bar Kochba uprising (132–135 AD), the Roman occupation under Emperor Hadrian renamed the province of Judea to Syria Palestine . The Roman rule also destroyed the Jewish capital Jerusalem , dispersed and expelled the Jews and built the Roman " Aelia Capitolina " on the ruins .

Unlike the Babylonian, the Palestinian Targumim that arose under Roman rule and under the influence of Hellenism in the province of Syria Palestine were mostly unofficial, i.e. H. Translations of the Jewish Bible that were unauthorized by leading Jewish interpreters of the time and that were interpreted in a variety of ways and that have many free narrative extensions.

A number of Targume emerged in the Palestinian area in the first centuries AD. The unofficial text variants are diverse. They combine free transcriptions of Bible texts (sometimes paraphrases ) with interpretations that were used in the synagogue service of various (special) congregations and groups. They allow insights into Hellenistic Judaism in Judea and Galilee under Roman occupation and the persecution of the Jews during this period.

The Targum Neophyti 1 (Tg N) includes the entire Torah (1st – 5th Book of Moses, Pentateuch ). The dating of the Targum is uncertain. A complete colophon dates from 1504 and was first incorrectly dubbed Targum Onqelos in the Vatican. In 1886 it was acquired by the Bibliotheca Vaticana from the Collegium Ecclesiasticum Neophytum, which it was then in 1602 by Gregory XIII. had received.

That it is an independent Targum was discovered in 1949 by the Spanish professors Josep Maria Millàs Vallicrosa and Alejandro Díez Macho . This Targum is not a pure translation into Palestinian Aramaic (in contrast to the Babylonian Aramaic ), but contains longer extensions of the biblical text in many places. Díez Macho argues that Neophyti 1 dates to the first century AD. As part of a pre-Christian textual tradition, it is based on anti-Jewish, anti- Halachic , material with early geographical and historical terms, Greek and Latin words, and pre-Masoretic Hebrew texts. Martin McNamara , however, argues that this Targum dates to the fourth century AD.

The Targum Pseudo- Jonathan or Jeruschalmi I (Tg J) also includes the Torah and Midrashim (sermon-like interpretations). The fragmentary argum or Targum Jeruschalmi II (Tg JII or Tg F) also contains collected midrashim for the Torah, which are only preserved in individual verses or groups of verses. It was completed before 800 AD. This Targum is a combination of translation and aggadic commentaries, where it is pure translation, it mostly corresponds to the Targum Onkelos.

Fragments of official Jewish Targumim were found with other old original Jewish Bible manuscripts in a geniza in Cairo in 1890 . Faulty Jewish writings that have become unsuitable (unskosher) due to age, wear and tear or accidents are collected in the genisa of a synagogue for a final, dignified burial.

Unlike the Palestinian ones, the Targumim, which arose in the Jewish diaspora in Babylonia, were official translations of the Jewish Bible authorized by leading Jewish interpreters of the time .

The official Targumim include the Targum Onkelos (Tg O), which in the Talmud is traced back to Onkelos or Rabbi Aquila , a proselyte and reviser of the Greek Septuagint . It includes the Torah and translates it literally and only slightly interpreted, close to the Masoretic text, but with some updating exegetical additions. It was probably started around 200 and revised several times until it was completed in the 5th century.

The Targum Jonathan or prophet's argument is traced back to Theodotion or Jonathan , who is also the author of a work on Kabbalah , the book Megadnim . The Targum Jonathan was probably started earlier. He transmits the biblical Nevi'im in narrative form.