Haggada books on the Seder table. 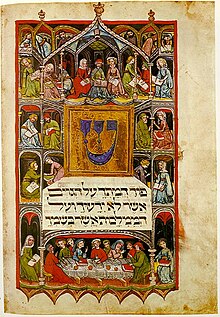 The Haggadah ( Hebrew הגדה, Plural Haggadot Hebrew הגדות, Verbal nouns from the root word Hebrew נגד; dt. “tell”, “report”) in the religious life of the Jews is a narrative and an instruction for the Seder on Erev Passover , the eve of the feast of the liberation of the Israelites from Egyptian slavery.

This Passover Haggadah is a sometimes illustrated booklet that is read and sung together with the family at the feast. It is written partly in Aramaic , partly in Hebrew (today mostly with translation and explanations in the national language) and describes the processes described in the Book of Exodus : the exile in Egypt and the departure into freedom. There are also traditional rabbinical embellishments and interpretations of this story. Numerous traditional songs accompany the feast that is part of the seder evening. This includes the song of the four questions Ma Nishtana ( Hebrew מַה נִּשְׁתַּנָּה, German  "What makes a difference ..." ). The traditional conclusion of the Haggadah is the song Chad gadja ( Aramaic גַּדְיָא חַד).

The term Haggada is not to be confused with Aggada , which means narrative or homiletic texts from the Talmud .

The so-called Vogelkopf Haggadah , which originated in Germany and was created around 1300, is one of the most famous Haggadot . A manuscript that is as famous as it is remarkable is the Sarajevo Haggadah made in Spain .