The title of this article is ambiguous. For the idea of ​​a new foundation, see Judea (state idea) .

Judea ( Latin Iudaea , from ancient Greek Ἰουδαία Judaía, this from Aramaic ארץ יהודיא, "land of the Jews", Hebrew יהודה Jehuda) is the geographical name of an area in the Levant . In Hebrew, no distinction is made between Judea and Judah . In German, the inhabitants of the area are referred to as Judeans and sometimes as Jews .

Judea this side of the Jordan

Judea this side of the Jordan - or simply Judea - essentially comprised the territory of the former Israelite kingdom of Judah . From the year 6 AD, this area was directly subordinated to the Roman state after Emperor Augustus deposed the ethnarch Archelaus , a son of King Herod the Great and his Samaritan wife Malthake, because of complaints from the Judeans and Samaritans . The administration was carried out by Roman prefects. They were based in the Mediterranean port of Caesarea Maritima . From 6 to 66 AD they were under the imperial legate of Syria . One of the most famous prefects was Pontius Pilate . In the brief period between AD 41-44, this Judea was annexed to the territory of Herod Agrippa I , a grandson of Herod the Great.

Judea across the Jordan

The Judea on the other side of the Jordan formed the main rulership of Herod Philip until his death in AD 34. After that, the area fell under Roman administration (Syria province).

Biblical evidence for the localization of Judea beyond the Jordan : Jos 19,32-34  ELB states that the tribal area Naftali in the east meets Judea across the Jordan. However, this could also be the land of Bashan , which was in the territory of the Manasseh tribe , but had been conquered by the clan of the Judean Jaïr . According to Mk 10.1  LUT and Mt 19.1  LUT , after Jesus had left Capernaum, he went to Judea on the other side of the Jordan. These passages could also mean that Jesus went to Judea through the East Bank. 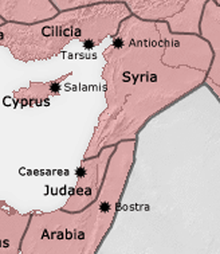 In Roman times, Judea was a Roman province . It comprised the greater region south of the Syria province as far as Egypt . Pompey had these areas in 63 BC. Conquered. This greater region comprised the Trachonitis, Auranitis, Gaulanitis, Batanäa, Galiläa, Samaria , Judea (this side of the Jordan), Peräa, and Idumäa up to the border against Aegyptus . Pompey left parts of this greater region to regional princes. The Hasmoneans with the prince and high priest John Hyrcanus II kept Idumea, Judea (this side of the Jordan), Perea and Galilee. Large parts of Judea across the Jordan, particularly Gaulanitis, went to Iturea .

When Pompey was defeated by Caesar , Hyrcanus was succeeded by his courtier Antipater . Antipater was born in 43 BC. Poisoned. His son Herod was born in 41 BC. BC Roman governor ( tetrarch ). In the winter of the same year the Parthians under Pakoros I invaded Syria and conquered Jerusalem the following year . John Hyrcanus II was captured and deposed, and in his place Antigonus became the last ruler of the Hasmoneans in Judea. Herod managed to escape to Rome. 37 BC He became king ( basileus ) of Judea by decision of the Roman Senate and made a name for himself as Herod the Great . Herod knew how to expand his territory. Around the year 20 BC His empire included all regions from Idumea to the Jordan Springs. Judea across the Jordan was also part of his territory.

After the death of Herod the Great (4 BC) there was a Jewish revolt. However, the Roman troops quickly put down the uprising. In agreement with the Roman emperor Augustus, three sons of Herod the great - Herodes Archelaos , Herodes Antipas and Herodes Philippos - took over their inheritance. 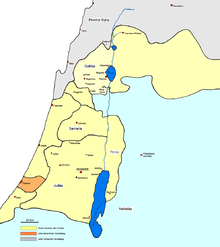 Israel in the 1st century

Archelaus inherited Judea, Samaria and Idumea, Antipas Galilee and Perea. Philip received the areas east of the upper Jordan towards Damascus, the Judea beyond the Jordan.

Herod Archelaus turned out to be a tyrant. He operated in Judea and Samaria from 4 BC. Chr. To 6 AD such a tyranny that he was dismissed by the Roman emperor Augustus. His area was placed directly under Roman governors who came from the Roman knighthood.

In 41 Emperor Claudius appointed Herod Agrippa I king. Its territory included the regions of Judea (this side of the Jordan), Samaria, Perea, Galilee and Judea on the other side of the Jordan. Agrippa I died in 44 and his empire was returned to Roman control. Between 48 and 54, the province was partially subordinated again to Agrippa's son Marcus Julius Agrippa . Its empire included eastern Galilee, Judea beyond the Jordan and parts of the Perea. The great Jewish war against the Romans lasted from 66 to 70 AD and ended with the destruction of the Jerusalem Temple . Gamla on the Golan Heights fell as early as 67 AD.

The area of ​​historical Judea in the State of Israel represents the administrative unit Yehuda in Judea and Samaria , it essentially corresponds to the southern West Bank .