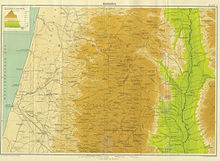 The biblical land of Samaria is the result of the split of the ten northern tribes of Israel from the royal house of David in 926 BC. BC emerged. Omri , who lived around 885-874 BC. When he was king of the northern kingdom , the city of Samaria became the capital of the northern kingdom. He is heavily criticized in the Bible for his syncretistic religious policy. Only a small group of YHWH believers survived the fall of the kingdom.

Since these Samaritans rejected the temple cult in Jerusalem and preferred their own places of sacrifice on the Gerizim , they were not recognized by the Israelites of the southern kingdom and in Jerusalem, but viewed with particular disdain (cf. also Jn 4,1-41  EU ; Jesus and the Samaritan Woman). That is the background when Jesus in the New Testament parable of the Good Samaritan portrays a Samaritan of all people as a model.

Samaria is now part of the West Bank .

Based on biblical toponyms, Israel refers to the West Bank as Judea and Samaria , which can also be rendered in direct transliteration as Yehudah and Shomron .