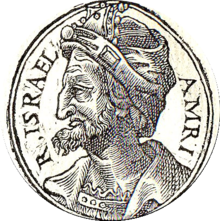 The origin of the name is Hebrew עָמְרִי ‛Åmrî “ Omri ”is unexplained. It used to be explained as the short form of the name å åmrijāhû , a derivation from the Arabic verb ‛mr " long live / prosper "was considered possible and the name Omri was translated as" long life [from / for Yhwh] ". According to a more recent theory, a derivation of Aramaic ġmr “to flood / be abundantly supplied with water” is being considered. Hans Rechenmacher suggests “Garbe” as a translation.

The Septuagint gives the name as ζαμβρι Zambri and αμβρι ambri , the Vulgate as Amri .

According to the 1st Book of Kings ( 1 Kings 16.8-28 EU ), Omri was originally a field captain  and general in the Ela army . After Ela was killed by Zimri , the people proclaimed Omri king that same day. He now went into battle against Zimri in Tirza , but the latter killed himself. After that, part of the people made Tibni king. Omri ruled alongside Tibni for an unknown time, after whose death he became king of all Israel. After six years of reign he bought a mountain from Schemer for two talents that was well suited for the construction of a fortification and allowed a wide view of the surrounding region. There he built a new city that could withstand long sieges, Samaria , which now rose to become the new capital of Israel.

Omri is mentioned in cuneiform scripts by the Moabites and in inscriptions by the Assyrians , who long after his death refer to Israel as the “Land of Omri” or “House of Omri”. On the one hand, Omri is described in the Bible as a statesmanlike king; in terms of religious policy, however, he is even judged more negatively than his predecessors ( 1 Kings 16.25  EU ).

The ruling dynasty founded by Omri is known as that of the Omrids . His son and successor was Ahab .