The title of this article is ambiguous. Further meanings are listed under Bashan (disambiguation) . 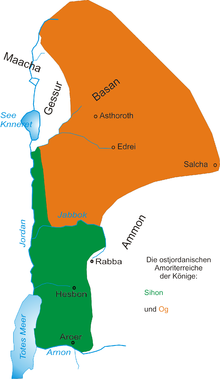 Bashan or Basan , "land of giants", is an earlier area in the land of Canaan , which is mainly mentioned in the Old Testament .

According to the biblical story, the original inhabitants of this highlands were the Rafaïter , an Amorite tribe ruled by a king ( Gen 14.5  EU ). In the Old Testament, the kingdom of Bashan is also referred to as the “rest of the Rafaïter” ( Jos 12.4  EU ).

According to the Bible, Bashan was conquered by the people of Israel when the king of Bashans, Og , refused him passage and a fight ensued ( Num 21,33  EU ). From the Jordan to the cities of Salchad and Edreï (in today's Syria ), Bashan comprised 60 heavily fortified cities at the time, on whose inhabitants the so-called divine ban was carried out after the defeat of Og - the extermination of the inhabitants ( Lev 3  EU ).

In the Bible, Bashan is mentioned in a total of 50 verses.