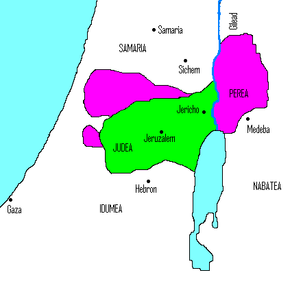 Dominion under the Hasmonean Jonathan 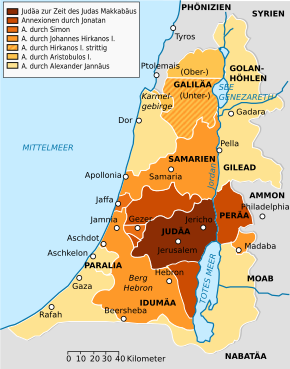 Development of the Hasmonean Empire 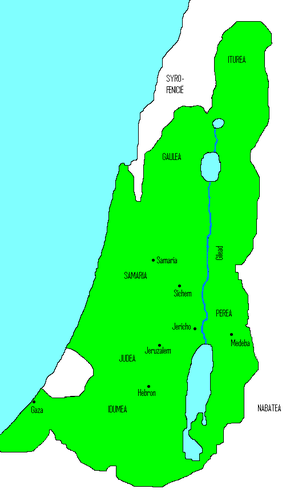 The Hasmonean Empire under Salome Alexandra

Hasmoneans ( Hebrew חַשְׁמוֹנַאִים Ḥašmōna'īm or Chaschmōna'īm ) is the name of a ruling dynasty in the second and first centuries BC. In Judea, resulting from the Maccabees' revolt in 167 BC. And founded an independent Jewish state in the Palestine region .

The patriotically minded priest ( Kohen ) Matitjahu is considered to be the ancestor of this dynasty , who, according to Josephus ' Jewish Antiquities, was the son of an Asamonaios (Ασαμωναίος) (11.111; 12.1). His son Yehuda was later called Maccabi ( Aramaic יהודה המכבי Y'hudhah HaMakabi , German for 'the hammer' ), but the actual founder of the ruling family was his brother, the ethnarch Simon . The Maccabees revolted against the sometimes violent Hellenization of Judea by Seleucid rulers. In the arts and literature, Yehuda is known as "Judas Maccabeus".

The Hasmoneans were rulers and high priests at the same time . They established a strictly religious system of the priesthood . The Maccabees gave the Jews about a century of extensive independence, during which Jewish religious teaching was able to develop further.

In 63 BC After the conquest by Pompey , the empire lost its independence. However, it then continued to exist as a Roman client state . Due to the reorganization of Palestine by Pompey, the Hasmoneans only retained the religious office of high priest.

The Hasmonean dynasty lost in 37 BC. Their power finally, and Herod the Great was declared King of Judea by the Senate in Rome .

In 6 AD, the kingdom was converted into the Roman province of Judea by the emperor Augustus and lost its statehood.

Other members of the family: