Heinrich Ewald (born November 16, 1803 in Göttingen , † May 4, 1875 there ) was a German orientalist and Protestant theologian . He is considered one of the most important orientalists of the 19th century. His work on Hebrew and Arabic , Biblical Exegesis of the Old Testament, and the history of the Hebrews was groundbreaking. Ewald worked at the University of Göttingen and moved to the University of Tübingen after a political scandal in 1837/38. In 1863 he was a co-founder of the German Protestant Association. In the Reichstag (North German Confederation) since 1869 , he became an opponent of Prussian militarism. 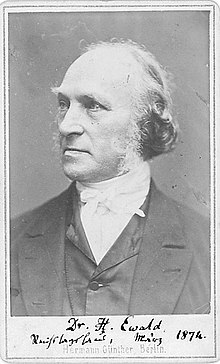 Heinrich Ewald was born in Göttingen in the Kingdom of Hanover as the son of the cloth maker Heinrich Andreas Ewald. From 1815 to 1820 he was a student at the Göttingen grammar school . He then studied at the Georg-August-Universität Göttingen as a student of Johann Eichhorn's Protestant theology and oriental studies. During his studies he worked from 1822 as a teacher at the high school in Wolfenbüttel. In the Herzog August Library he had access to oriental manuscripts, which he used for his studies. In 1823 he finished his studies in Göttingen with a doctorate and stayed for a year as a professor at the Wolfenbütteler Gymnasium.

He then moved to the theological faculty of the University of Göttingen as a repetitee and was appointed associate professor for oriental languages ​​at the philosophy faculty in 1827 after Eichhorn's death at the age of 23 . Ewald also had knowledge of Sanskrit and Indian literature and gave a lecture on Sanskrit language and literature in Göttingen in the winter semester of 1826/27 . In 1830, at the age of almost 27, he married Minna Gauß , daughter of the mathematician Carl Friedrich Gauß .

At the beginning of the 1830s Heinrich Ewald was a respected and recognized orientalist and theologian who could hope for a great future. In 1831 he was appointed full professor for the Old Testament at the Philosophical Faculty of the University of Göttingen. In 1833 he became an academician in the Royal Society of Sciences , in 1835 professor of oriental languages ​​and in the same year he was appointed to the honor faculty . In December 1834 he was accepted as a corresponding member of the Russian Academy of Sciences in Saint Petersburg . On December 12, 1837, however, his career in Göttingen came to a surprising end when he and six colleagues protested against the change to the constitution and was then dismissed from all offices and honors as one of the Göttingen Seven by King Ernst August I (Hanover) .

His scientific reputation, however, reached far beyond the borders of the Kingdom of Hanover, although he also experienced fierce professional opposition and was accused of arrogance. In May 1838 he was appointed full professor of philosophy at the University of Tübingen in the Kingdom of Württemberg and, at his own request, was transferred to the theological faculty in 1841. Among his students at that time were August Schleicher and August Dillmann , whom he inspired for oriental studies and oriental languages. One of his Tübingen students was Rudolf von Roth , who later succeeded Ewald as an associate professor for oriental languages ​​in Tübingen. His stay in Tübingen was overshadowed by the early death of his wife, who died in 1840 at the age of 32. Some of his most important works were created in Tübingen and his bitter feud with the theologian Ferdinand Baur and the Tübingen School began .

In the 1840s, the Göttingen University suffered heavily from the consequences of the dismissal of its seven outstanding professors. No scholar of rank could be appointed to the orphaned chairs of the Göttingen Seven , and the number of students fell drastically by almost half. In order to raise the university's reputation again, an attempt was made to bring the seven back together in Göttingen. These efforts were only successful with the physicist Wilhelm Weber and Heinrich Ewald, who returned to his hometown in 1848 and taught Old Testament theology and oriental languages ​​there again. He explained the circumstances of his “departure” from Tübingen in his own book.

In 1863 he was one of the founders of the German Protestant Association in Frankfurt am Main . At the church synod in 1864 he called for a better church constitution in the spirit of Luther, as well as free choice of pastors and freedom of theological research .

His political convictions were again put to the test in 1867. Prussia had annexed the Kingdom of Hanover in 1866 and demanded that all civil servants be sworn in on the Prussian king. Heinrich Ewald was against the German unification under Prussian rule, refused the oath in March 1867 and was therefore expelled from the Philosophical Faculty. However, he received permission to hold lectures while retaining his salary. Because of insubordinate statements in his work The Praise of the King and the People , his teaching license was finally revoked in 1868. From 1869 he pursued his political convictions as a member of parliament for the Guelph Party . He vehemently opposed Prussian politics, which brought about unification of the empire by military means. Even after the war of 1870–71 and the proclamation of the German Empire , Heinrich Ewald remained a staunch opponent of the triumphant Prussian militarism . Heinrich Ewald died at the age of 72 in Göttingen and was buried there in the Bartholomäi cemetery, today's Marien cemetery.