The (North German) Reichstag was the parliament of the North German Confederation . This federation from 1867 was a German federal state, which expanded into the German Empire in 1870/71 ( foundation of an empire ). The popularly elected Reichstag on the one hand and the Bundesrat on the other hand were responsible for the legislation. The parliamentary sessions were held in the manor house of the Prussian state parliament at Leipziger Strasse 3 in Berlin .

In February 1867 a constituent Reichstag was elected. It was not yet a parliament, but a constitutional body. After the Federal Constitution came into force on July 1, 1867, the Federal Presidium (King Wilhelm I of Prussia) called for elections to the Reichstag. They took place in August and, like the election in February, were organized according to the laws of the individual states . As agreed in the August alliance , the basis for this was the Frankfurt Reichstag election law of 1849.

The Reichstag in the draft constitution 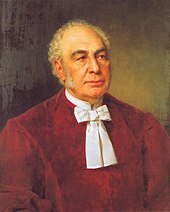 According to Otto von Bismarck's draft constitution , the Reichstag was to form the representative body of the North German Confederation. It was to stand alongside the monarchical-federal executive of the Federal Presidium and the Federal Council . The parliament was to be given the powers customary at the time and to act as a counterbalance to particularistic and monarchical influences. It was just as important that parliament should involve the liberal-national movement. The Reichstag was clearly weaker than the other federal organs, but was not marginalized in the constitution . In contrast to the parliaments of the individual states, it should not be based on a census or class electoral law , but according to general, equal and secret electoral law .

However, universal suffrage has been weakened by not dieting . This meant that less well-off people were in fact unable to accept a mandate. This provision acted like a census and was directed primarily against workers' representatives. The separation of mandate and public employment was also planned, which would have meant the exclusion of the civil servants and other civil servants who were so numerous in the state parliaments and who also formed a core of the liberal movement .

Election of the constituent Reichstag

A constituent Reichstag based on universal suffrage was elected on February 12, 1867 to deliberate on the constitution. The area of ​​the North German Confederation was divided into 297 electoral districts, in each of which one member was directly elected according to the absolute majority vote. If no candidate achieved an absolute majority in the first ballot, a runoff election was held between the two best-placed candidates. Despite considerable criticism of the North German Confederation, especially in the areas annexed by Prussia in 1866 , there was nowhere an election boycott. Overall, the turnout of almost 65% was significantly higher than in the elections to the Prussian state parliaments . However, the election results initially hardly differed from those of the state parliaments. The government tried to influence the elections, but its results reflected the political mood of the population.

The majority presented just by elimination of the Progressive Party formed the National Liberal Party , along with the liberal-conservative Free Conservatives . There were also a few other liberal-minded MPs. These came together to 180 out of 297 mandates and formed the potential supporters of Bismarck's policy. In contrast, there were 63 old conservatives , 13 Polish MPs, 18 Welfs and other particularists and 19 MPs from the Progress Party. The anti-Prussian-democratically oriented Saxon People's Party was represented by the two later social democratic parliamentarians August Bebel and Reinhold Schraps .

Composition of the constituent Reichstag

→ Main article : List of members of the first ordinary Reichstag of the North German Confederation

Opening of the Reichstag by the Presidium, the Prussian King; Drawing in the Leipziger Illustrirten Zeitung

In addition, there were Generals Eduard Vogel von Falckenstein and Karl Friedrich von Steinmetz , who were elected for their war earnings in 1866 . Bebel also described von Bismarck as a less than charismatic speaker and ended with an assessment that was probably shared by most of the other parliamentarians. “The time of ideals is over. German unity has descended from the dream world into the prosaic world of reality. Today politicians have less than ever to ask what is desirable and what is achievable. " 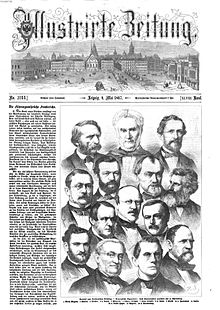 Well-known member of the Reichstag, Leipziger Illustrirte Zeitung from May 1867

The constitutional deliberations took place largely in-house; there were hardly any petitions or outside attempts at influence, in contrast to the national assemblies of 1848/49. Although the conclusion of the constitution aimed at an agreement between parliament and the monarch, Bismarck had reserved the right to impose a constitution in the event that the draft was changed too far. With this threat in the background, he was usually able to assert himself in cases of conflict. However, Bismarck also had to accept compromises. So it was not possible to turn the Federal President into a federal monarch. There was no catalog of fundamental rights . One reason was the different formulations of the individual states, and Bismarck also wanted to avoid fundamental ideological conflicts, for example about the position of the church or family.

The liberals failed to demand parliamentary responsibility for the heads of the federal ministries for their government acts. However, on the initiative of the national liberal parliamentary group leader von Bennigsen, the responsibility of the Federal Chancellor for legal acts of the Federal Presidium was introduced ( Lex Bennigsen ). This was a fundamental change from the original design. The Chancellor had to defend and represent his policy to parliament and the public. Although he was still appointed by the Federal President, i.e. the Prussian King, to a certain extent also became dependent on the majorities in parliament (actual parliamentary responsibility did not develop until the end of the German Empire ).

More important, however, was that the Federal Chancellor was previously only intended as a kind of manager of the Federal Council, but with Lex Bennigsen it became another federal body. This strengthened the central government in relation to the federal element and increased the Chancellor's political leeway in all directions. For the Liberals, the responsibility of the Chancellor was a partial success, as it meant a strengthening of the constitutional element.

Parliament approved the diet ban. Since it itself consisted to a large extent of public servants, it prevented the planned exclusion of civil servants from a mandate. Although there were for the most part certain reservations about universal suffrage among the National Liberals, they ultimately accepted it. However, the parliamentary majority also enforced the secret electoral law. This prevented the authorities from overseeing voting behavior, which had previously been the norm. The majority also succeeded in significantly expanding responsibilities in the area of ​​justice and financial policy with regard to the core competencies of the Reichstag. Above all, the budget approval right was made more effective and thus acted as a parliamentary control option on the expenditure side, alongside the parliament's right to tax approval on the income side. Instead of a three-year approval, parliament enforced the budget for one year at a time, which of course did not apply to army expenditure and thus the largest expenditure item. However, there was also a compromise on this issue. If Bismarck originally wanted a permanent permit (Äternat) and the Liberals an annual budget, they agreed on a four-year period of approval. Parliament's rights remained strictly limited, particularly in the military sector.

The constitution was adopted by the constituent Reichstag with 230 votes to 53. Not only the liberals had agreed, but also the conservatives.

The election for the first regular Reichstag

The first elections to an ordinary Reichstag (as a constitutional organ ) took place on August 31, 1867. At 40.5%, the voter turnout was significantly lower than at the last poll. Basically nothing changed in the liberal-free-conservative majority (in the constituent Reichstag); however, the split in the liberal movement became more apparent. In the old Prussian provinces, the German Progress Party was able to hold its own against the National Liberals (14.2% to 13.8%). The National Liberals had their real strength in the new provinces (almost 40% to 6.3% progress) and the smaller states. Representatives of the political labor movement were now more represented in parliament than in the first election . The Saxon People's Party, from which the SDAP emerged in 1869 , won three seats, the ADAV two seats and the LADAV, which was split off from the ADAV, one seat. In by-elections in 1869, the ADAV and the LADAV each won another seat.

During the legislative period of the only Reichstag in the time of the North German Confederation, the Confederation and, last but not least, the Reichstag developed considerable legislative activity. In addition to the factual decisions in the various political fields, especially in the area of ​​the legal, social and economic order, this also included the introduction of parliamentary procedures, which are still influential in some cases today. Electoral exams were introduced. Since then, three readings of legislative proposals have been common. Commissions and lists of speakers were now determined according to the strength of the political groups. A council of elders was introduced as an intergroup body. The Reichstag took the initiative and put the administration under pressure, especially on many issues. Since the group membership was in some cases still fluid and there were still quite a number of non-attached MPs, the result of a series of votes was completely open until the end. However, it soon became apparent that the parliament had a significant influence on economic and legal policy, for example. However, the military and foreign policy remained a government issue. The occasional attempts to expand parliament's influence failed because of the threat of veto by the Federal Council.

Transition to the German Empire

After Bismarck's successful Franco-German War in November 1870 and the annexation of Alsace-Lorraine by the Germans, the states of Baden , Hesse , Bavaria and Württemberg expressed their desire to join the Confederation. At the request of the Bundesrat and with the consent of the Reichstag on December 9, 1870, the North German Confederation was renamed the German Empire .

These changes became effective with the new constitution of January 1, 1871 (DBV). According to Article 80 (point 13), the electoral law was one of the laws that will apply to the “German Confederation”. According to this constitution, however, only Hesse and Baden had joined. The treaties with Württemberg and Bavaria regulated the election of members of the Reichstag in these two countries (with an addition to Art. 20 DBV).

The Reichstag was re-elected on March 3, 1871. This election was the first to be governed by the Electoral Act of 1869. This Reichstag is considered the first Reichstag of the empire ; in April he adopted a revised form of the federal constitution, which was later referred to as the Bismarckian constitution .