This article describes the writer, for the cartographer of the same name see Freytag & Berndt 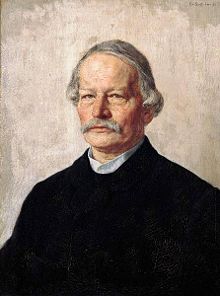 Freytag's country house in Siebleben , "the good smithy", which he bought on July 2, 1851 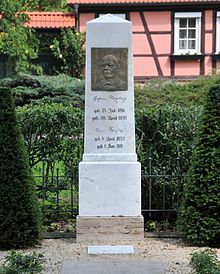 Freytag's parents were Gottlob Ferdinand Freytag, doctor and later mayor of Kreuzburg in Silesia, and his wife Henriette, née. Zebe. He attended high school in Oels and, after graduating from high school , studied philology , cultural history and ancient art at the Silesian Friedrich-Wilhelms-Universität in Breslau until 1835 . In 1835 he became active in the Corps Borussia Breslau . As an inactive he moved to the Friedrich-Wilhelms-Universität zu Berlin .

During his studies in Breslau, he met August Heinrich Hoffmann von Fallersleben and established his friendship with the "thirteen linden poet" Friedrich Wilhelm Weber (1813-1894). The subject of his dissertation from 1838 was "On the beginnings of dramatic poetry among the Teutons". From 1839 to 1847 he was a private lecturer at the University of Breslau. During this time he wrote his first plays. He then moved to Leipzig and a year later to Dresden, where he interacted with writers. In 1848 he published the magazine Die Grenzbote in Leipzig together with Julian Schmidt , which he made into the most influential organ of the liberal German bourgeoisie. His career as a journalist began when he took over the border messengers . Freytag also wrote politically critical articles in the weekly magazine, including about the suppression of the Silesian weavers' uprising , which resulted in a wanted-for-life search by Prussia. He therefore asked his friend Duke Ernst of Saxe-Coburg-Gotha for political asylum and in 1851 moved to Siebleben bei Gotha . Duke Ernst awarded him the title of Hofrat in 1854 .

From February to August 1867 Freytag was a member of the National Liberal Party in the constituent Reichstag of the North German Confederation. In the election for the first legislative period of the Reichstag , he no longer ran. As a reason he wrote to Duke Ernst in June 1867 :

“[M] a next duty [is] to see that the real life of my people does not lose the nobility of poetry. First of all, what I have of strength belongs to art and its teaching. [...] In politics it is doubtful what I achieve and what I use, in my field I know it. "

Freytag turned against small states and advocated the small German solution . Freytag became the epitome of the German liberal. He later resigned out of disappointment with Otto von Bismarck's policy. In 1870/71 he took part in the Franco-German War as a reporter at the headquarters of the Prussian Crown Prince Friedrich . From 1871 to 1873 he represented his national liberal views in the magazine Im neue Reich . In 1886 he was appointed secret councilor and was given the title of " Excellency ". In the same year he received the order Pour le Mérite for sciences and arts .

See also : List of Corps students in the Reichstag of the North German Confederation and in the Customs Parliament

In 1844 Freytag's first play " Die Brautfahrt oder Kunz von der Rosen " appeared, a comedy about Emperor Maximilian, for which he won the Berlin Court Stage Prize. In 1847 the plays " Die Valentine " and " Graf Waldemar " appeared; In contrast to them, Freytag's comedy " Die Journalisten " , published in 1854, was extremely successful and was one of the most frequently performed pieces and canonical works in German literature until well into the first half of the 20th century.

Between 1859 and 1867 his main cultural-historical work " Pictures from the German Past " was written in four volumes. In it, Freytag describes German history using selected source texts as an example. The work, which was published by Salomon Hirzel Verlag in Leipzig, had between 27 and 32 editions, depending on the volume, by 1909, making it one of the most popular German historical works of the 19th century.

Because of his novel “ Soll und haben ”, which appeared in 1855, Freytag was heavily criticized after the Second World War because of his allegedly anti-Semitic tendencies. This became clear in the debate about the filming of “ Debit and Credit ” in 1977 by Rainer Werner Fassbinder , which ultimately led to the WDR abandoning the project . The main reason for this is the depiction of the unscrupulous, amoral and greedy Jewish merchant Veitel Itzig, whom Freytag contrasts with the figure of the honest protagonist Anton Wohlfart, who is characterized by a high work ethic. On the other hand, Freytag has expressly spoken out against anti-Semitism in several essays ( The dispute over Judaism in music , against Richard Wagner , as well as On anti-Semitism. A Pentecost contemplation ). Furthermore, Freytag also provides relatives in debit and credit , e.g. B. of the German nobility as morally rejected, while other figures of Jewish descent (including the parents of Veitel Itzig) are portrayed positively.

The " Technique of Drama " (1863) became one of the most important dramaturgical textbooks of its time. Freytag summarizes here the drama theory of the closed drama according to Aristotle and above all Friedrich Schiller on the "pyramidal structure" ( exposition and exciting moment , climax with peripetia , retarding moment and solution or catastrophe) of the classical drama. Freytag's "Technique of Drama" was among other things formative for the dramatic work of the Latvian national writer Rūdolfs Blaumanis (1863–1908), which is still extremely successful in his home country .

In 1869 Freytag wrote the text “ Karl Mathy . History of his life ”, which describes the life of a former friend of Freytag's. Another cycle of novels appeared from 1872 to 1880 under the name “ Die Ahnen ” and describes the fictional fate of a German family from the Germanic times to the present, which he spanned from the Germans to the Germans of his time. Almost ten years before his death, in 1886, he created a diary-like text called “ Memories ” in which he described the most important periods in his life.

After a short change of residence to Leipzig in 1846 he moved to Dresden in 1847 and back to Leipzig in 1848. In autumn 1847 he married Emilie Scholz, divorced Countess Dyhrn , whom he had met in 1842 during a vacation in Heligoland when she was still married. In 1851 he moved to Siebleben in the “good smithy”. 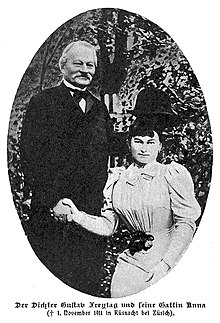 Freytag died at the age of 78 in Wiesbaden and found his final resting place in Siebleben , today a district of Gotha. There was a lawsuit for his inheritance between his son Gustav, whom he had made sole heir by will of November 3, 1891, and his widow Anna, née. Götzel, who last lived in a household with Freytag. The heir and executor of the will questioned the list of estates created by Anna and successfully sued the Frankfurt Higher Regional Court for the list to be completed and sworn.

Freytag's stepdaughter Mika-Maria was deported to Theresienstadt in 1943 and liberated there two years later by the Americans. Then she came back and lived at Weimarer Str. 145 in Gotha-Siebleben. There a stumbling stone was set in for them by the sculptor Gunter Demnig .

Birthplace with memorial plaque in Kreuzburg / Silesia (around 1910)

In Thuringia, was named in honor of the poet of the trail , the Wachsenburggemeinde and Mühlburg in Castle Ensemble Drei Gleichen , joins Gustav Freytag-Weg named.

In Kreuzburg OS. (since 1945: Kluczbork) , where Freytag had spent his youth, a fountain with his relief picture was built in front of the town hall on the Ring; In the early 1940s a school and museum were named after him. At that time a memorial plaque was attached to the house at Am Ring No. 31. Already after his death, the decision was made in Kreuzburg to have an oak planted in his honor by the Silesian Forest Association in the local forest there on June 26, 1903. Two more trees were owned by the landowner Eduard Georg v. Bethusy-Huc and the Royal Chancellery Franz Welczek .

In the Siebleben district of Gotha there has been a Gustav Freytag memorial since May 2009, which is set up in the garden pavilion next to the poet's former home. The memorial includes a recreated living room and study by Gustav Freytag, as well as an exhibition on the life and work of the poet with original objects and documents from his estate. Only about 70 items from Freytag's Siebleben era are on display. All 700 corresponding items were brought from Siebleben to Weimar during the GDR era, in the 1970s. Most of them are still there.

The residential building (Freytag House) itself was renovated in 2016, and the roof, windows and heating were replaced in the early 1990s. It houses the local association of the DRK and the local mayor's office. The house, steeped in history, was built in a small park in 1780 by the Duke of State Minister Sylvius von Frankenberg . Napoleon and Goethe, and later Thomas Mann, came to the house. Gustav Freytag wrote many of his works there.

Works by Gustav Freytag (a selection) 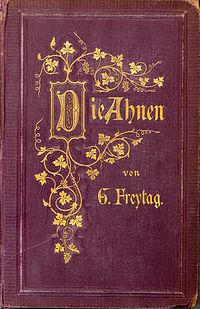 Works based on texts by Gustav Freytag