This article is about the character of the novel, Karl Mays. For the film of the same name, see Old Shatterhand (film) .

Old Shatterhand is a fictional character that the German writer Karl May created for his Wild West novels. The person is identical to Kara Ben Nemsi from May's Orient novels. He embodies the infallible hero. In most novels, the events are told in first person form from Old Shatterhand's point of view (travel stories); in some from the perspective of an omniscient narrator (youth novels), which also includes scenes in which Old Shatterhand is not directly involved.

Karl May and Old Shatterhand

Through the first-person narrative style, the readers began to identify with the character of the novel, Karl May, which he strengthened for a long time. ("I speak and write: French , English , Italian , Spanish , Greek , Latin , Hebrew , Romanian , Arabic 6 dialects, Persian , Kurdish 2 dialects, Chinese 2 dialects, Malay , Namaqua , some Sunda idioms, Swahili , Hindostan , Turkish and Indian languages of the Sioux , Apaches , Comanches , Snakes , Utah , Kiowas , together with the Ketschumany three South American dialects. Lappish I do not count. ") This so-called" Old Shatterhand Legend "also means that it 1,896 advertising photographs resulted in Had wild west and oriental costumes made. 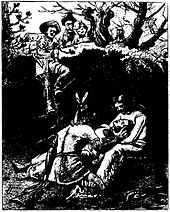 Old Shatterhand (left), illustration by A. Hrdlicka for the story Mutterliebe (1898)

In the book Winnetou I , the first-person narrator is a young German who works as a tutor in St. Louis . On the mediation of his friends, he rides as a land surveyor in the west to measure a new railway line with other men. Shatterhand gets its name in this story from the chief engineer of a nearby surveying team. The engineer introduces the name after seeing the first-person narrator knock a hostile western man of great physical strength unconscious with a single blow on the temple. Sam Hawkens immediately adopts this war name, although he always calls the narrator a greenhorn, and makes him known in the Wild West. After Old Shatterhand rescued the Apache chief Intschu tschuna and his son Winnetou unrecognized from the Kiowas stake, shortly afterwards he was seriously injured in battle by Winnetou (stabbed with a knife in the oral cavity and tongue) and carried off to the camp of the Mescalero Apache. While he is recovering he is cared for by Winnetou's sister Nscho-chi , who falls in love with him. In a swimming competition against Intschu-chuna as a divine judgment, he has to fight for his freedom. After he has won, he becomes Winnetou's blood brother (Karl May - collected works, volume 7: Winnetou 1st part ). Since then, Winnetou has often called him " Scharlih " ("Charlie" = "Karl").

Winnetou I is the first volume in the Karl May chronology, but not the first text that Karl May wrote with the hero "Old Shatterhand". In fact, the character goes through a literary development similar to that of Winnetou . At the first appearance in the chronology, the hero has therefore already matured to perfection.

Bear killer (center) and Henrystutzen (right) in the Karl May Museum in Radebeul . On the left Winnetou's silver rifle.

Old Shatterhand owned a black horse with the Indian name Hatatitla (lightning) and two distinctive rifles: the " Henrystutzen " (a rifle with which you could shoot 25 times without reloading) and the "Bärentöter" (a very heavy rifle that even could kill a bear with one shot at long range). He received both rifles from the gunsmith Henry from St. Louis ( Winnetou 1st part and 2nd part ). The real model is likely to have been the gunsmith Benjamin Tyler Henry , whose Henry rifle was an improvement on the actually 25-round Volcanic carbine , but only had a 16-round magazine.

Old Shatterhand is fully assigned to the good side and fights together with Winnetou and / or with other companions against the usually clearly separated evil side. He tries to make friends into enemies. He only kills enemies when self-defense requires it. Otherwise he renders them incapable of fighting with targeted shots in limbs or with fist blows. He is a perfect western man , marksman and rider as well as a master in other necessary skills of the west (" western man "). Specific western skills and knowledge were taught to him first by Sam Hawkens, later by Winnetou; he already has general skills based on logic and intellect, strength or endurance.

He travels the world to later write books about the country and its people at home.

He is an avowed Christian. In this capacity, he distances himself from “alibi Christians” who go to church regularly, but who lack the actual Christian virtues. He sees other religions, especially Islam, as wrong and speaks openly about them with their relatives.

He repeatedly emphasizes the fundamental equality between human races and ethnic groups and also condemns direct racism , but still makes value judgments both against races (Africans are good-natured and carefree; Chinese are devious; Bedouins are predatory, etc.) and against individual people based on their facial features he believes he can read character traits.

Although he always describes Winnetou as the perfect master of all disciplines in the West, he is still a bit superior to him. In addition, he occasionally causes Winnetou to change decisions. After all, he is also superior to Winnetou because of his knowledge of civilization, such as deciphering writings, calendars or maps. Winnetou occasionally surpasses him in specific local, language and ethnic knowledge.

In addition to the original titles, the following tables contain the current numbers of the volume and the story from Karl May's Gesammelte Werken (titles may differ here), the title of the corresponding reprint of the Karl May Society and the department and volume number of the historical-critical edition of Karl May Works (if already published) indicated.

As early as 1938, the actor Ernst Wilhelm Borchert played Old Shatterhand, alongside Will Quadflieg as Winnetou, in the play "Winnetou, the red gentleman" at the Berlin Volksbühne , directed by Ludwig Körner.

The character of Old Shatterhand was played by the American actor Lex Barker in several Karl May films . The Dutch singer and actor Bruce Low played the Old Shatterhand in 1966 and 1968 in the Berlin Deutschlandhalle and in 1975 in the Stadthalle Vienna.

He was portrayed by Siegfried Rauch in the television series Mein Freund Winnetou (1979) . The German director, actor and voice actor Rüdiger Bahr plays him in Ralph Siegel's musical Winnetou (1982) . On the open-air stage in Elspe in the Sauerland, the actor Jochen Bludau played the German hero figure alongside Pierre Brice as Winnetou for many years . In the early 1950s, Hellmut Lange played Old Shatterhand on an open-air stage in Stuttgart . His partner, who embodied the Indian chief, was Sigurd Fitzek .

The first appearance of Old Shatterhand in the film took place in the German film Der Schatz im Silbersee (1962), the greatest German cinema success of the 1960s. The film adaptations at best adhere loosely to May's novel, so the main character of the book in the "Battle for Butler's Farm" was Old Firehand and not Old Shatterhand. In the film version, various items of equipment and clothing from the description of the novel were completely dispensed with. Lex Barker shaves off her beard in the first scenes of the Silbersee film adaptation, symbolizing the change of the character from the literary antiquated to the “progressive” film hero. Further differences between the portrayal by this actor and the novel are the lack of a hat and footwear, which consists of moccasins instead of knee-length boots.

The movie Old Shatterhand (1964) is not based on any literary material by Karl May.

Karl May films with Old Shatterhand

In the radio play

The radio play discovered the Wild West stories much earlier. And there were a large number of different Old Shatterhands here.