The title of this article is ambiguous. Further meanings are listed under Rappe (disambiguation) . 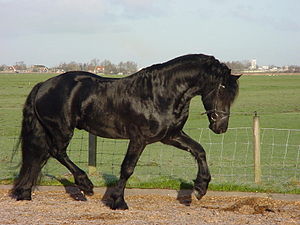 A black horse is a horse with black mane, tail, and fur.

The black horse owes its name to the raven , a black bird - so it is a "raven-black" horse. 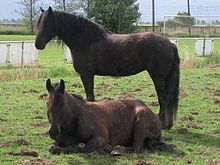 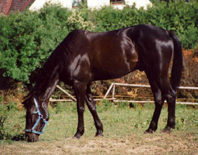 Cabbage foxes, black browns, and smoky blacks can be so dark they might be mistaken for blacks, even though they aren't genetically blacks. 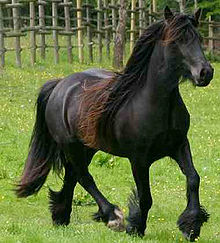 Genetically speaking, black is the melanism of the horse. There are two different ways in which this color can arise.

In order for a horse to become a black horse, it must have the recessive allele a for the black color twice on the agoutilocus and the dominant allele E at least once on the extension locus , which allows black color on the mane and tail.

There is a dominant black color gene in Arabs that is assigned to the extension locus. A horse that carries this gene once, i.e. is heterozygous for it, becomes rapping independently of the other genes on extension and agoutilocus.

Influenced by other color genes

Horses that have one of the gene combinations for black color on the agouti and extension locus can be changed in color by other color genes:

The effect of leucistic color genes in rapping is that part of the fur is white because there the melanocytes, the dye-forming cells, are missing, while other areas of the fur retain the basic black color. The weakest form of leucism results in white markings. A black piebald develops when the black color is combined with one of the piebald genes . In stichelhaarigen horses a permanent Rappschimmel arises. These animals and similar fur drawings like the Rabicano , the Varnish Roan , the Frosty Roan , some Sabino Overos have a mixture of white and black hair on at least part of the fur. In the dominantly white horse , the black basic color can no longer be seen, as the melanocytes of the fur are missing on the entire body. A black horse lightened by the Champagne gene is called Classik Champagne .

Genes from the albinism spectrum lighten the fur on the entire body to gray or brown. Sometimes this leads to an evenly light color, in other cases a drawing can be seen. A horse that has been lightened from the black color to a brown by a simply present (heterozygous) cream gene is referred to as a bonfire or smoky black . The color of the affected animals ranges from black to dark brown. A horse that has been lightened to almost white by a homozygous cream gene from the black color is referred to as smoky cream . The wind color gene brightens black horses to gray or brown, sometimes with apple markings. The affected animals are called black wind colors or wind brown. White horses can be born as black horses. They are born with the basic color determined by the other color genes and get more and more white hair in the course of their life until they are finally completely white (atlas mold) or only have small colored spots (fly mold).

Black is a rather rare color. Nevertheless, it is anchored in the breeding standard for some horse breeds - such as the Friesian , the fur pony and the Mérens horse - that they must be blacks.