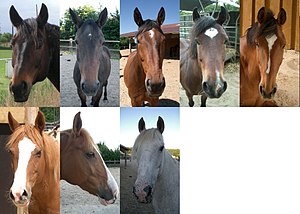 In horses, a badge is an invariable and innate identifier. A distinction is made between the fur swirls , white badges and colored badges.

All innate badges are so individual that they are used for identification (like the fingerprint in humans). They are entered in the pedigree papers by the vet . Acquired badges such as brand marks or scars from injuries can also be included.

If a horse does not have any white markings, "no markings" are entered in the identification papers. These animals can then only be identified via fur swirls and non-innate signs.

Badge on the head

Small white marks on the forehead are called differently depending on the size and shape.

Badges that extend from the forehead to the mouth are called blazes .

Narrow blaze, wide blaze and stroke can be continuous and interrupted. All shapes can be symmetrical, but also very irregular.

Badges can also appear in combination, for example as a flake together with a snap.

Badges on the limbs

The designation always first indicates the place starting with the side, for example "left front" and then names the badge. The highest point reached by the white badge always counts. If the course is not uniform, one speaks of irregular.

The subdivision takes place according to limb sections (ascending list):

Influence of coat color on badges

In the case of white horses, the markings are still easy to see on young animals that are still dark. In the course of life, however, the fur turns white and the markings can only be seen on the skin as pink spots on a black background, while the fur is white everywhere.

If a horse is almost white due to a lightening of the color in the albinism spectrum, i.e. almost no dye (melanin) can be produced, the mechanism that leads to the formation of markings and piebalds is not affected. This means that cremellos or perlinos can also have badges, but these are hardly recognizable because the horses are almost white.

The frequency and size of markings is also related to the underlying color: foxes have markings larger than browns that are heterozygous for the fox gene, and these in turn have larger markings than browns that do not have a fox gene. White horses and black horses rarely have badges.

White badges are often called " albino " because of their whiteness , but actually belong to the leucistic circle of shapes and are created similar to spotted patterns .

In fact, piebald patterns in horses , when minimal, sometimes only express themselves in large markings. In addition to the check genes, there are several other genes that can only produce badges. The range of variation in the badge size depends roughly 2/3 on genetic factors and roughly 1/3 on other factors.

The gene for the Freiberg's white markings is located at the kit locus.

For some horse breeds , such as the Frisians , badges are not allowed due to the breeding regulations. The markings on the legs can also extend to the hooves , which then results in white hooves.

There are also badges that are not white, such as an eel line . This is a darker line that runs from the mane to the tail over the spine. If the eel line is very pronounced, it can be crossed over the withers by a second dark stripe. This is called the shoulder cross. Often, in combination with an eel line, there are also zebra crossings. These horizontal stripes are on the forearm between the carpal and elbow joints. Like the eel line, they are darker than the rest of the fur. In summary, these three badges are called wild color badges. They are associated with the color of the dun . Zebra stripes can also occur in wild-type browns . The wild color badge occurs in many domestic horse breeds and in wild horses .

The wild color badges are a remnant of the stripes typical of zebras.

In domestic and wild horses, the striation occurs only in falcons and is even more regressed there than in all other equidae. Depending on the animal, these residual stripes can be differently pronounced in Fallows. The eel line is almost always visible. Zebra crossings on the legs are the next most common element. Remnants of the shoulder cross and vertical spots on the neck and torso are even rarer. Only in exceptional cases can you still see remains of the zebra's face drawing on the head. However, the existing stripes always correspond to those of the zebra in terms of direction and location.

In Falben sometimes a dark face mask occurs. It is also typical of the tarpan .

There are two forms of the flour muzzle - a variant, which, like the other white facial markings in horses, is caused by leucism and is associated with pink skin, and a variant that often occurs in pony and horse breeds that are still very close to the wild horse, and caused by a different control of melanin synthesis. The non-leucistic variant can be recognized by the black skin on the nose and by the fact that the horse's stomach and the insides of the legs are lightened at the same time.

The mouth is lightened from black or dark brown to brown or light brown. A horse of this color is never genetically black.

Ben d'or spots (also called bend or spots, Ben dor spots or almond spots, corn spots or fly spots) are small, round, dark spots. They are named after an English thoroughbred named Bend 'or , in whom these points were first described. They're common, especially in foxes and palominos. Inheritance is so far completely unknown.

These spots are also named after an English thoroughbred - birdcatcher. The spots are small, round, and white, and occur regardless of a check pattern. The inheritance of Birdcatcher spots is unknown, but according to the current state of research it has nothing to do with the previously known types of check. Birdcatcher spots occur relatively often, but mostly undetected.

As soon as the birdcatcher spots are larger than about 3–4 cm in diameter, they are called Chubari spots. Again, nothing is known about inheritance. The spots got their name from the English thoroughbred Chubari .

(also called tetrarch spots) are white spots that are larger than Chubari spots. They are named after Tetrarch (English thoroughbred).

A bloodmark, also called bloody shoulder, is an area of ​​red or brown burl hair in light fur, usually on the shoulder or neck. It occurs in gray horses, especially in Arabian thoroughbreds but also in quarter horses and English thoroughbreds. It arises either from the incomplete mold at the site of the later blood mark or from the gradual accumulation of colored hairs each time a gray horse changes coat.

A Reverse Bloodmark is the reverse drawing of the Bloodmark, i.e. a light, spiky-haired area in the dark fur.

When a piebald is white in large areas of its body, it sometimes leaves small, dark areas of fur that look like upside-down markings. A medicine hat (literally translated: medicine hat) is used when only the ears and a small area around them remain dark. Reverse Blaze (literally: upside down blaze) is a dark badge shaped like a blaze or lantern.