The title of this article is ambiguous. For the novel, see Brandzeichen (Roman) .

A brand is a feature that is introduced into the skin or an object by means of an object that is heated or cooled to minus degrees - in particular a so-called branding iron . The term “ branding ”, which is used for the development and further development of a brand, goes back to the practice of branding.

A brand is used to identify horses and cattle . While an ear tag is used for the official identification and registration of animals, brands mark the affiliation to an animal breed or - rarely and with other symbols - to an owner.

Burning in a tinker foal

In the case of a breeding brand, the brand is burned on using a hot iron (hot fire). Scar tissue will form, which will keep the mark visible. Alternatively, in the case of a cold fire, an iron that has been cooled to around −80 ° C by liquid nitrogen (cold fire) is used to burn a mark into the upper layers of the skin, which destroys the pigment-forming cells ( melanocytes ). Due to the lack of pigment cells, only white fur can grow back in these areas. i.e. the branding remains visible.

The most common breed of brandy found in horses today is that they are awarded by a breeding association . These are often supplemented with a number brand, which serves for better identification. There are also entry fires that are used when entering a breeding register. In some breeds, all animals of a breeder are marked with a breeder's brand. In this context, stud farms are referred to as stud brand marks. Brands that identify the owner were used on free-range herds (for example, cattle herds in the western United States ).

Since the introduction of the microchip to identify horses, burning has become the focus of an animal welfare discussion. There is more agreement when assessing the fire in other parts of the body, because the sore throat, the burn in the saddle position and the burn on the ganache cause more complications. The Swiss army banned from 2019, the hot stamping of all horses and mules of the army.

Arguments against the thigh fire

The thigh fire is controversial. Animal rights activists and some of the veterinarians state that thigh burns cause third-degree burns in foals. The young animals often showed symptoms of pain for weeks and were often disturbed after the injury from the hot fire, their suckling and play behavior was impaired.

A study by the University of Copenhagen found the burning sensation more painful for the animals than the injection of a microchip.

Errors could occur when burning, which could make the fire difficult to read in the long term.

Arguments for the thigh fire

On the part of dermatology it is stated that the outer skin of mammals is evolutionarily prepared for injuries. The short-term and long-term effects of chipping a transponder on the health and psyche of horses, however, are unknown. The implantation of chips could lead to considerable complication rates.

In the thigh burn, the skin in the region of the burn was scarred, but there were no signs of inflammation to be found. The situation is different with chipping: the chip is encased in tissue as a foreign body, linked to inflammatory processes. Skin injuries, such as when burning, would heal without any problems. In contrast, the body perceives the chip as annoying for life. In the worst case, it forms purulent ulcers to reject the chip.

In addition, the wandering of the microchip in the horse's body is listed as an argument. Some chips can no longer be found after a while. Others migrated near the neck, for example, which creates problems when the horse is supposed to bend its neck.

Brand mark on the neck of a mule

Brand marks are permitted as a method of marking and identifying horses under the Animal Welfare Act. The destruction of tissues associated with the burning sensation, including pain, is generally prohibited according to Section 6 (1) sentence 1 of the Animal Welfare Act (TierSchG). From Section 6, Paragraph 1, Clause 2, No. 2 in conjunction with Section 5, Paragraph 3, No. 7 of the Animal Protection Act, there is an exception to the prohibition of destroying the tissue of a vertebrate animal for horse thigh blight.

Burning was banned in Denmark in 2010.

In 2012, the German Federal Minister of Agriculture, Ilse Aigner , introduced an amendment to the Animal Welfare Act , which should repeal the previous exception in the Animal Welfare Act with regard to thigh fire and should come into force in autumn 2012. At the end of October 2012, Christel Happach-Kazan , agricultural policy spokeswoman for the FDP, was quoted as saying that a ban on the brand was off the table. The Bundestag decided to keep the hot fire, until 2018 this should be done without anesthesia.

Since January 1, 2019, branding may only be carried out under local anesthesia. Since no corresponding anesthetic is permitted for horses in Germany, hot fire is de facto (for the time being) no longer permitted.

Whipping and branding of a thief (left), Denmark, 18th century (the nine male accomplices were hanged)

In the past people were also branded : slaves in antiquity and slaves in America as well as criminals were branded with a brand as a physical punishment until the 19th century. In the late 20th century, branding became fashionable as a form of body modification , with decorative scars being burned into the skin. 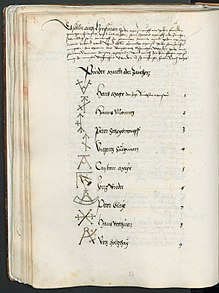 Brand of the Bolzano cooper (Fassbinder) from 1518 ( Bozen city book )

Branding marks were also set in felled wood or wooden goods with the help of a branding iron, for example used by coopers as a trademark for their wooden barrels in the early 16th century. Stuhlmacher and Joiners recorded its manufactured furniture with branding, privileged Hofstuhlmacher burned next to the maker's mark a crown. Nowadays, brands are used as laser markings for marking speedometers , fleece jackets , golf balls , hi-fi boards , jewels , dishes or tablets.

"Brand marks" in the sense of porcelain brands and brand-like characteristics of other ceramics (e.g. earthenware , faience , stoneware ) are not applied by branding irons , but by blind stamps, painting or stamping a mark before firing.