Background information on horse evaluation and breeding can be found under: Exterior , interior and horse breeding .

The head of a Trakehner is noble because it is bred from pure blood.

The Trakehner is considered a noble warm-blooded breed , since it is bred purely; That means, apart from Trakehners, only English (xx) and Arabian thoroughbreds (ox) , Shagya-Arabs and Anglo-Arabs may be crossed. It comes very close to the ideal of the modern riding horse (straight or arabized profile - long, elegant neck - sloping shoulder - pronounced withers - medium length - round ribbed - long, sloping and well-muscled croup ).

The Trakehner is suitable for all types of equestrian sports. His particular strengths are eventing and endurance riding . In the last few decades, Trakehner horses have also been bred specifically for suitability as dressage horses.

In no other riding discipline you can find as many Trakehner in percentage terms as in versatility. In pure show jumping and driving sports, there are numerically less specialized breeding stables. Driving tests were part of the mare performance test until at least the end of the Second World War , so that many Trakehners are still well suited for this. In western riding , Trakehner are rarely used. In terms of character, the Trakehner is seen as willing to perform, and occasionally as difficult.

The correct name of the breed depends on the place of birth of the respective horse. Horses that were born in the Trakehnen main stud were called Trakehner. These horses were branded with the simple elk shovel on the left hindquarters. Horses of the same breed that were born outside of the main Trakehnen stud are referred to as East Prussian Warmblood Trakehner descent (colloquially East Prussians ). The double elk shovel on the left hindquarters is used as a brand. Since there has been no breeding in Trakehnen since October 1944, there are strictly speaking no Trakehner anymore, but only the East Prussian warmblood Trakehner descent. Nonetheless, the name Trakehner has become popular in everyday language.

Trakehner originally come from Trakehnen ( East Prussia ). The beginnings of breeding go back to the 13th century, to the time of the Teutonic Knights . The Teutonic Knights bred military horses based on the Schweiken pony ( Prussian sweykis: plow horse). In 1732, the King of Prussia, Friedrich Wilhelm, founded the royal Trakehner Stud Office .

During his last inspection trip through East Prussia in August 1739, King Friedrich Wilhelm gave the stud to his son, Crown Prince Friedrich. Friedrich, who became King Friedrich II the following year , wrote to his wife Elisabeth Christine : “The King was very generous and gave me the Stud (Trakehnen), which is very profitable. This is a very nice gift and does me the greatest favor in the world. "

The seven-ended elk shovel has been used as a brand since 1787. 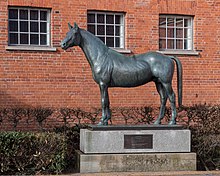 The stud became the most important source of Prussian stallions and quickly acquired a reputation for breeding elegant and persistent carriage horses. By the end of the 18th century, the focus had shifted back to the breeding of military horses. The basis of this success was the introduction of performance tests and the precise documentation of the family tree by the then Kgl. Prussian Oberlandstallmeister and stud manager of Trakehnen Burchard von Oettingen . At the time of the stud's heyday , its area covered almost 140 square kilometers of pasture land. In the 19th century, Arabs and English thoroughbreds were used to refine the breed . This led to the fact that at the beginning of the 20th century, the Trakehner had about 50 percent whole blood.

Breeding in East Prussia collapsed completely in 1945 with the end of the Second World War . Only a small part of the East Prussian horses - 575 mares and 45 stallions from private farms - reached with columns of refugees after months of fleeing the area of the later Western occupation zones. The holdings of the main stud Trakehnen were evacuated to the Remonteamt Perlin and to the Prussian main studs Neustadt / Dosse and Graditz . Most of these horses were later brought to the Soviet Union as reparations . Trakehner breeding has been practiced in all German federal states and worldwide since 1945 . The breeding, which was continued in the remaining western parts of Germany, was not able to achieve the original quality again until late due to lack of mass. After the war, however, the Trakehner was used to refine all German warmblood breeds and has thus played a major role in the development of the modern type of German riding horse that dominates international competition sports. Due to his traditionally high percentage of whole blood, he is considered to be strong and persistent. His domains are especially dressage and versatility. With some of the horses left behind during the escape, a new Trakehner breed was started in Russia on the Don , near Kaluga and in the Kaliningrad Oblast . But the Trakehner have also found new breeding areas worldwide, particularly in Scandinavia, the Benelux countries and North America.

Particularly rare today are special Trakehner colors such as the Trakehner piebald or the even rarer spiky-haired Trakehner.