Dressage is a discipline of equestrian sport in which the natural disposition of the horse is promoted and refined through gymnastic exercises. The aim of dressage is the rideable horse , which can be prompted to carry out a desired task (“lesson”) precisely in response to minimal signals ( “help” ). The dressage training of the horse is the basis of every riding activity and finds its completion in the high school . The so-called scale of training is decisive for the training of all horses in dressage .

Dressage riding promotes and refines the horse's natural movements and enables him to optimally carry the rider's weight , thereby helping to keep the horse healthy. In this context, dressage means less the conditioning of the horse on commands in the sense of freedom training, but rather the gymnastics and sensitization of the horse to increase strength, mobility and permeability :

“The basic idea of ​​classical dressage is to keep a riding horse healthy for as long as possible by practicing gymnastic exercises, through which the horse should be able to remain usable for riding without being damaged. The horse should become more beautiful, expressive and self-confident through the systematic training, which results in the overall image of a [...] harmoniously built athlete. "

The training of a dressage horse is classically based on the training scale .

Dressage as a tournament sport 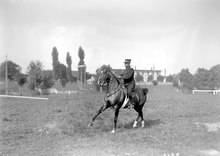 Dressage riding around 100 years ago: A major in the Swiss Army rides a dressage test on a curb

Dressage as a sport emerged from the comparison between officers at the end of the 19th century and, like most equestrian disciplines, was initially reserved for them. While the so-called "Carousels" or "Horse-Ballets" (comparable to today's quadrilles ) were the usual riding demonstrations in court circles for a long time , in 1873 the "Society for Prämierung well-trained Campagne Horses" in Pressburg for the first time a price riding as an individual riding competition carried out. These exams spread throughout Europe in the years that followed. In addition to the usual lessons in today's dressage tests, they also contained obstacles. The successor to these obstacles was an obedience jump at the end of dressage tests until the 1970s.

The rules of the sport, which have been Olympic since 1912 , are based on the military requirements of the European cavalry . Today women are leaders in dressage around the world. Since 2009 men and women have been rated jointly at the German Dressage Championships. For decades, Germany has dominated the dressage sport due to its success in horse breeding ; it is one of the most successful sports in which German athletes compete internationally.

At tournaments , riders and horses in dressage tasks are rated with a value from 0 (not shown) to 10 (excellent). Either a grade is given for the entire task or an overall grade that results from separate grades for each individual lesson of the task. The tests are carried out individually or in small groups on a standardized dressage arena and assessed jointly or individually by up to five judges.

The dressage exercises consist of a certain number of lessons that are shown in a certain order or, in a freestyle, with background music in a freely chosen sequence. The horse moves in the basic gaits of step, trot and gallop on straight and curved lines (train figures ), forwards, sideways or backwards. In the higher disciplines of dressage, more complicated movement sequences are shown ( traversal , passage , piaffe , canter pirouette, etc.).

The seat and the aids provided by the rider, the movement and rideability of the horse as well as the correctness of the execution of the required lessons are assessed.

Dressage riders are repeatedly criticized for using the " roll cure ", also known as hyperflexion. The rider acts so strongly on the reins that he forces his horse to lower his head and curl his neck.

Dressage, despite its Olympic successes, received little attention from the German-speaking media, from the end of 2010 onwards there was a temporary increase in media coverage. The reason for this was the marketing of the stallion Totilas , sometimes referred to as a “wonder horse” , which was also reflected in the tabloids.

Dressage has been Olympic since Stockholm 1912 (individual) and Amsterdam 1928 (team). Women have been integrated into the teams since 1952 . 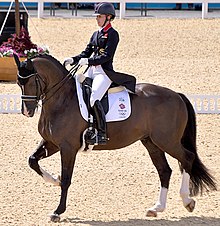 Since Atlanta 1996, dressage riding has also been a discipline in the Paralympics , the Olympic Games for athletes with a physical disability.

The world records in the three most difficult dressage competitions - Grand Prix de Dressage , Grand Prix Spécial and Grand Prix Freestyle - are each over 80 percent, in the Freestyle even over 90 percent. The following lists contain the current records as well as previous world records.