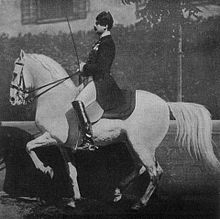 Chief rider Meixner on Neapolitano Bona in the piaffe 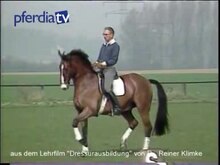 The piaffe (from the French "piaffer" = to dance, stamp) is an exercise in classical equestrian art in which the horse performs a trot-like movement at the point.

The piaffe is a relevant part of the higher dressage tests of the FEI and is cultivated as folklore in many riding styles (e.g. on the Iberian Peninsula , in Pakistan and India and in many South American countries).

The authors of all centuries unanimously describe the beneficial effects on the equilibrium and the permeability of the horse as significant. Not all horses are equally suitable for the piaffe. It takes an innate, sublime, noble movement and a lively but at the same time patient temperament. During the execution, it is important that the rider does not need the rein because the horse does the exercise on its own. The piaffe is usually trained on the hand and only performed later under the rider. Hinrichs divides the aids into four components: moderate bustle, full bustle, wait for the effect, let the reprise fade away. He recommends waking a lazy horse in short repetitions and calming an overzealous horse in long repetitions. Francois Baucher gives the strict instruction to follow the rule "hands without legs, legs without hands" meticulously, especially in the piaffe. He means that reins and thigh aids must never be used at the same time. Steinbrecht sees the ideal piaffe when the foreleg is almost horizontal, the neck is in good shape and the horse is chewing the bit with every step. Philippe Karl demonstrates this in a field test that proves that only the piaffe with the neck at the highest point, the front leg in the vertical and lowered croup can shift the horse's body weight to the hind legs.

The following errors are described: