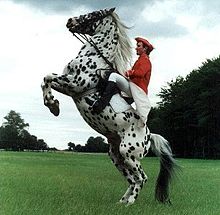 The pesade (ital. “Posata” from “posare” = model standing, posing, according to Waldemar Seunig later pesade from “pesare” = to weigh) is an exercise in classical equestrian art in which the horse shifts its weight onto its hind legs, its own Lifts the trunk at an angle of more than 45 ° to the ground and pulls the front legs towards the body. If the angle is smaller, it is called a levade . The two terms levade and pesade were synonymous until they were distinguished by Gustav Steinbrecht at the end of the 19th century .

The pesade is the ennoblement of the horse's natural rearing up (climbing). It was used early on by equestrian warriors to use the horse's body as a shield and the front hooves as a weapon.

The artful elevation is first seen in 400 BC. Mentioned by the Greek war horse trainer Xenophon.

“ It is not true, as some believe, that the horse that has the most agile legs will therefore have more ease in getting up with the front part, but only the one with the most flexible cross, short and strong loins will be can put the hind feet farthest under the front feet, and at the moment when it does this and you tighten the bridle, it will put the hind body on the heels and rise with the front part, so that you can see the stomach and the Buzzing sees. "

The pesade is one of the schools above the earth of horsemanship. These are divided into surveys (levade and pesade) and school jumps ( croupade , ballotade , caper , Viennese courbette ).

The pesade is usually trained on the hand before it is performed under the rider. It is developed from the piaffe or the parade in the stand. Holleufer distinguishes three different manners of performing the pesade:

" Some, the cautious and relaxed, well-practiced and with a strong hindquarters, step forward with one hind foot after the other until they have reached the base, then they slowly go up with their forehand and let themselves be just as deliberately again down. Other horses gather by a few short kicks backwards or by pushing the upper body back behind the hind feet; still others jump briskly forward with both hind legs at the same time and walk up quickly, but usually come down a little more quickly. "

- Bernhard Hugo von Holleuffer : The treatment of the riding and carriage horse between the Pilaren , 1900

In the pesade, the horse's body weight is evenly distributed over both hind legs, which are next to each other. The front legs are bent at an angle , the horse is balanced in a bridled position and often remains in the pesade for much longer than a second. It is different when climbing. The horse rears up, throws his neck and head up and shows various other deviations from the form described, whereby a rapid loss of balance can lead to slipping or rolling over.